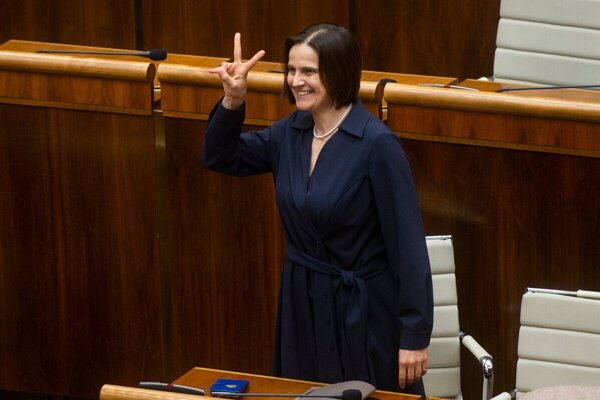 The parliament okayed major changes to the map of Slovak courts at its April session, just in time for Slovakia to request the first payment from the EU for its Recovery Plan.

MPs passed the law, known as the reform of the court map, on April 27. Justice Minister Mária Kolíková (SaS), the author of the reform, sees this change as a step towards a better judiciary with a working system and clear agenda in Slovakia, even though some judges seem to disapprove.

“Now we can establish city courts, which means that one quarter of all cases can be organised in a new way,” the minister told the press conference after the vote, as quoted by the TASR newswire.

The law was passed following a number of delays. Most recently, at the February session, the MPs only passed three of the four proposed laws. Since the passing of the court map is a milestone that Slovakia has pledged to reach in order to draw funding from the EU for its Recovery Plan, there were concerns that, unless the MPs passed the reform at the April session, the country could have lost access to the first payment from the fund, worth €458 million.

Whom the changes concern

The changes within the system will affect both the administrative and general branches of the judiciary, concerning municipal and district courts. In the updated version of the court map, the overall agenda of administrative judiciary will be reduced from district courts to three courts headquartered in western, central and eastern Slovakia – Bratislava, Banská Bystrica and Košice respectively. The reform does not put abolish district courts as such, only changes the way their agenda is handled.

The borders of juridical districts should be tied to pre-existing regions of Slovakia. The Ministry of Justice explains their decision to keep the locations of the courts and slightly change the borders of their scope because of how well the existing borders work in practice.

The three main courts will concentrate the issues of family and business agendas within their regions, making it easier for smaller court offices to deal with internal issues. In addition, administration will also fall under the responsibilities of three main courts.

Kolíková faced disagreement from the opposition and even her own coalition partners when first lobbying for her updated version of the court map. Boris Kollár (Sme Rodina) argued that judges needed to improve the technology they work with, first acquire modern computers to do their job effectively and properly.

Kolíková explained that better technology couldn’t come without bigger systemic changes and that rebuilding the judiciary from scratch is an impossible task. Steps towards its betterment were necessary and a crucial part of the EU recovery plan’s requirements for euro funds and grants, which could help improve the state of Slovakia’s justice. In other words, the court map was also a contract with the EU.