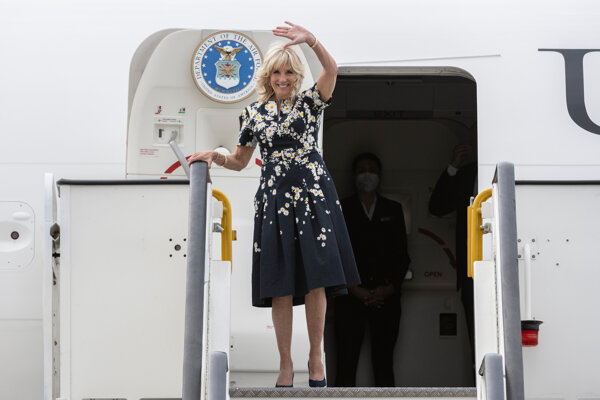 The First Lady flew into Bratislava airport and was welcomed by Slovakia’s Foreign Affairs Minister Ivan Korčok. Her visit is a sign of appreciation of the assistance Slovakia has provided Ukraine and Ukrainian refugees, the minister tweeted afterwards.

On Saturday, Biden paid tribute to murdered journalist Ján Kuciak and his fiancée Martina Kušnírová by laying flowers at the memorial to the couple in the centre of Bratislava. She also met with U.S. embassy staff.

Biden will travel to eastern Slovakia on Sunday where she will visit a refugee centre in Košice and meet with local officials Košice mayor Jaroslav Polaček and Košice Region head Rastislav Trnka, the TASR newswire wrote.

She will then go to a primary school on Tomášikova Street in the city to celebrate Mother’s Day, which falls on May 8, with Ukrainian mothers and children who fled their country following Russia’s invasion. The school opened two classes for children from Ukraine at the start of this week. 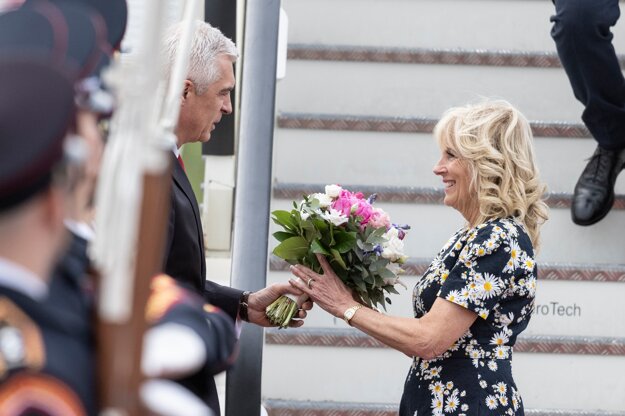 The First Lady will end her visit to eastern Slovakia in the border town of Vyšné Nemecké, one of three crossings with Ukraine, where she will meet Slovak Prime Minister Eduard Heger and Interior Minister Roman Mikulec. Biden will meet volunteers, non-profit organisations, and members of security forces who have been helping Ukrainian refugees and securing the Slovak border.

Since the invasion started on February 24, more than 400,000 refugees have crossed the Slovak-Ukrainian border. Of them, more than 74,000 have applied for temporary protection status.

On Monday, May 9, Biden also plans to meet with other members of the government and President Zuzana Čaputová before returning to the United States.

Biden is the third U.S. First Lady to visit Slovakia. 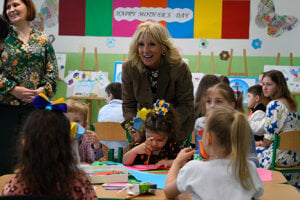 Hillary Clinton visited the country in 1996 and 1999 to meet with pro-democracy organisations. On her first trip, she met with the then authoritarian Slovak prime minister Vladimír Mečiar as well. Several years later, Clinton mentioned the meeting with him in her book, “Living History”, in which she claims that she was “appalled at his bullying attitude and barely controlled rage”. In 1999, she praised Slovakia, which had ousted Mečiar, for its move toward democracy.

Laura Bush followed in her footsteps during the Bush-Putin summit held in the Slovak capital in February 2005 . Her first stop was the University Library in Bratislava where she opened the InfoUSA centre.

Biden’s five-day trip, which she began on May 6 in Romania, is her second visit to another country as first lady without her husband. Last year, she attended the Olympics in Japan.

In Romania, the First Lady served meals to U.S. troops at a local air base, recorded a virtual bedtime story for an American boy whose mother is serving in Romania, and met with US embassy staff in Bucharest. She also paid a visit to a local school that has taken in Ukrainian refugee pupils.

President Joe Biden visited Ukrainian refugees in Poland during his trip in March.