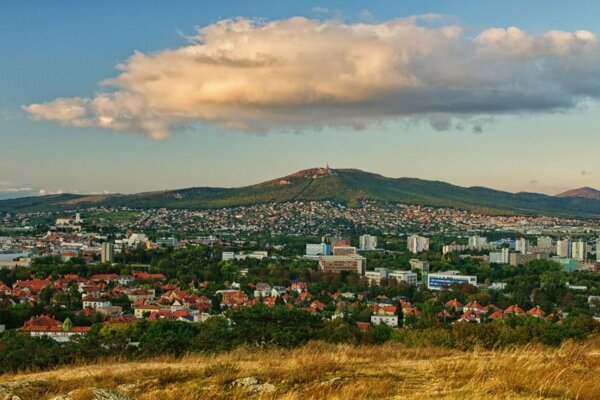 A view of Nitra from one of the seven hills that the city is built on. (Source: Tourist Information Centre Nitra)
Font size:A-|A+  Comments disabled

Two new ferratas were created on the rocks below the Pyramid in Nitra. They will be open to the public from July of this year. Members of the Nitra Mountain Association took part in their construction; the author of the project is its member Peter Michalík.

The first ferratas in the Nitra region will consist of two routes with different difficulties, the TASR newswire reported. With both routes it is possible to get to the top of the rock pillar of the Pyramid hill in Zobor, informed the executive director of the Nitra Tourism Organization Marta Hároniková.

View Slovakia’s oldest city through a kaleidoscopic lens with our Nitra city guide.

The simpler route of difficulty B is called Brezová and leads through a 12-metre ascent. The more difficult Dubová route of B / C difficulty will check the fitness of tourists on a 15-metre cable-stayed bridge leading through a rock window.

The Nitra ferratas are one-way. The ascent begins under the rocks of the Pyramid. They are freely accessible to the public until the winter months, when they will be closed.

The members of the association recommend using the ferrata in daylight. The ascent takes an average of 20 to 30 minutes, depending on the fitness of the climber. Climbers should use ferrata equipment.