The biggest central space in Slovakia's capital tells its history before it changes again. 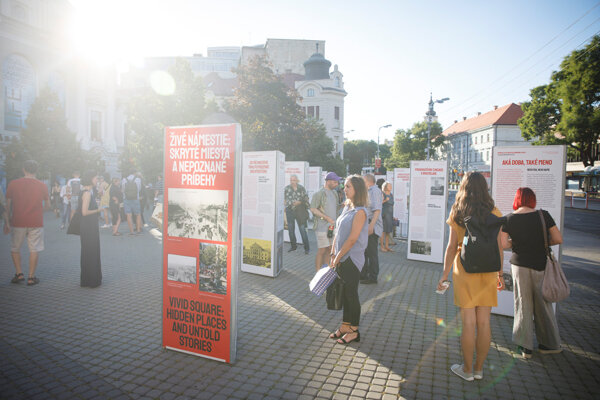 The biggest central space in Bratislava, which consists of three adjoining squares – Kamenné, Velvet Revolution and SNP - has at one time or another been the city’s main marketplace, a target of Napoleon’s shellfire, and the place where Slovaks rallied to win their freedom and democracy.

Together, the three squares will soon go through a complex revitalisation with a price tag of €20 million. Beforehand, Bratislavské Rožky, the civic association dedicated to promoting Bratislava’s history, has prepared an outdoor exhibition, The Vivid Square: Hidden Places and Untold Stories, revealing the highlights of its history.

“The exhibition shows how unique this space is, the richness of the history that can be found and what we have here,” Peter Janoviček of Bratislavské Rožky told The Slovak Spectator.

The exhibition, which is taking place until the end of October, was prepared based on The Vivid Square Guide published by the Metropolitan Institute of Bratislava in 2021. They have chosen the most interesting information and supplemented it with their own findings.

Slovak National Uprising (SNP) Square has witnessed a lot of changes over the centuries.

In the 15th century, it served as a marketplace, with fitting names – part of the square was Bread Market and another part Green Market. It was not until 1879 that all these markets were joined together, along with two other squares – Kramársky Rad and Námestie Milosrdných – to form one large area known as Markt Platz in German, Vásártér in Hungarian, or Market Square when translated into English.

After World War I, the square was renamed Republic Square, only to become Hlinka Square during World War II when Slovakia was a Nazi satellite state, and then Stalin Square after 1945, when it featured his sculpture. Only after Stalin’s death was it renamed, becoming SNP Square.