Sulík: SaS ministers will step down on Wednesday

The party says it won't support the state budget for next year in its current form. 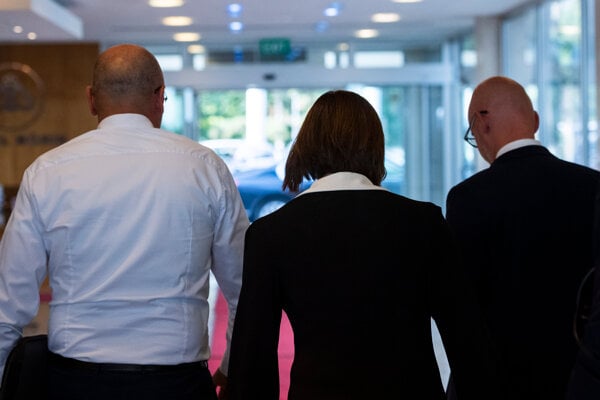 SaS leader and Economy Minister Richard Sulík said that as SaS' key demand – that Igor Matovič, the current finance minister and leader of fellow coalition party OĽaNO, should leave the government – had not been met, his ministers would submit their resignations next Wednesday, August 31. Speaking after a coalition meeting on Friday, August 26, he opined that further coalition talks would be pointless.

“No new proposals have been made today; we were only asked by OĽaNO how we would behave in certain situations,” Sulík told journalists, as quoted by the TASR newswire.

Igor Matovič was not at the meeting: he is currently on holiday in Spain.

Sulík said that further negotiation among the coalition would no longer be relevant. SaS representatives expressed surprise that their OĽaNO colleagues refused even to discuss Matovič's resignation.

Sulík pointed out that that the departure of the four SaS ministers – Justice Minister Mária Kolíková, Education Minister Branislav Gröhling, Foreign Affair Minister Ivan Korčok and himself as Economy Minister - would have an effect, as it would be necessary to fill many other positions within the ministries.

SaS ministers expect President Zuzana Čaputová to accept their resignations on September 8. Sulík added that SaS-nominated state secretaries (i.e. deputy ministers) at the Economy Ministry were willing to stay at their posts for one or two more weeks.

The question of SaS' stance towards the state budget was also raised at the meeting, with Sulík responding that the coalition could hardly expect SaS to support it given that it now contains a €1 billion gap resulting from policies pursued by Matovič in defiance of SaS, which he passed only after turning to far-right MPs to help circumvent the veto of President Zuzana Čaputová – indeed, this was one of the main reason for SaS' ultimatum.

“There will have to be corrections, or they cannot count on our votes,” said Sulík.

The SaS leader said that SaS MPs would help open the September parliamentary session and would support cabinet proposals in their first reading. They will also submit a “road map” for the energy sector.

If the coalition wants something, it will have to negotiate with SaS.

“We will be an opposition party, we will be constructive,” said Sulík.

Sulík emphasized that his party had done everything it could to remain in the ruling coalition.

“The country faces problems, we are available, we do not run away from responsibility, we have repeatedly told them that Igor Matovič should leave the government and that the four of us will stay and take full responsibility for our ministries,” Sulík said.