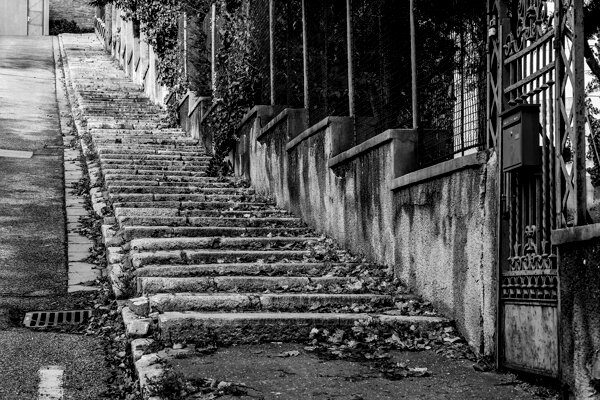 As a small boy, photographer Anton Sládek lived on Lermontovova Street in Bratislava’s Old Town. His father, an assistant at the University of Economics, once took him to his office on Palisády Street, via a shortcut from Vlčkova Street up the stairs to Marótyho Street.

“It left a magical impression on me,” recalled the photographer to The Slovak Spectator.

These shortcuts, with more in this part of the city, fascinate Sládek to this day. He has made them the subject of his latest photo book, entitled Skratky (Shortcuts), while dedicating the book itself to his father.

“They weren’t normal sidewalks, but like something secret that not everyone knew about,” said Sládek.

At that time, in the 1960s and 1970s, there were significantly fewer houses in this area than today. There were mainly gardens where people grew fruits and vegetables. As a small boy, Sládek wandered with his friends along the sidewalks leading between them. Later they used these paths when wandering from one local pub to another.

“I have had these shortcuts stuck somewhere in the back of my head,” said the photographer.

During the Covid-19 pandemic he resolved to systematically map them. Every day he set off with a tripod under his arm with the aim of creating a complete documentary of a chosen shortcut or path.

The result is a book of black-and-white photographs, which in 16 chapters maps the streets of the so-called Upper City, the area above Palisády Street. The author supplemented the book with hand-drawn maps.