Rides on renovated railway in Vychylovka in the spring

The Kysuce forest railway was established between 1915 and 1918, once used to transport wood. 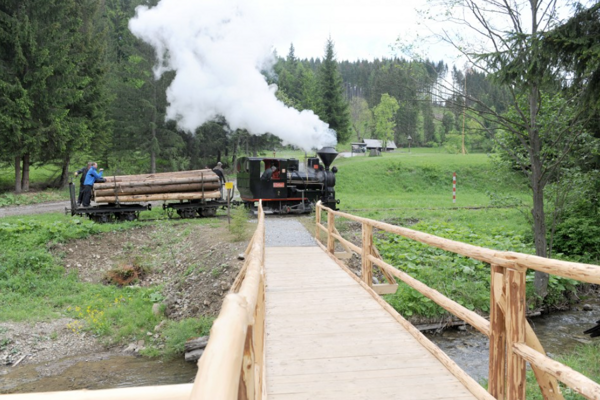 The reconstruction of the two-kilometre section of the Historic Forest Headland Railway in the Vychylovka open-air museum in Nová Bystrica is at an end. Costs rose to €2.2 million. As stated by the director of the Kysucké Museum Helena Kotvasová, the operation on the section will start in spring, after obtaining the permit.

The reconstructed part of the railway starts from Kubátkovia station and stretches to the railway depot under Skanzen (open-air museum) station. It was damaged by a flood in the past, which made it impossible to pass through. The museum director said that in several places there were inadequate wooden sleepers, switches and worn rails. It was possible to renovate the bottom and top of the railway for a line speed of 20 kilometres per hour, as well as the platform at Kubátkovia station and level crossings, including new cabling. A siding was also created at Skanzen station.

"Thanks to the Slovak-Polish cross-border cooperation project, a two-kilometre section of the historic railway was reconstructed after almost ten years,” Kotvasová explained, as quoted by the TASR newswire. “I believe that the operation of the lower section of the railway will be an interesting attraction for visitors.”

As she added, they are currently repairing the switches at the first caputium and graveling the bed along the entire railway line from the museum's resources. The aim of these activities is to restore the operation of the railway from Kubátkovia station to Sedlo Beskyd, which will connect the Kysucká and Orava forest railways.

The Kysuce forest railway was established between 1915 and 1918, once used to transport wood. It led from Oščadnica to Chmúra station in Vychylovka. In 1926, they completed the eight-kilometre section connecting Kysucká with the Orava Forest Railway. Since 1991, it has been called the Historic Forest Headland Railway. It is currently under use by the Kysucké Museum to transport visitors through the grounds of the Kysucké Village Museum.