Bratislava to welcome the new year in the streets again 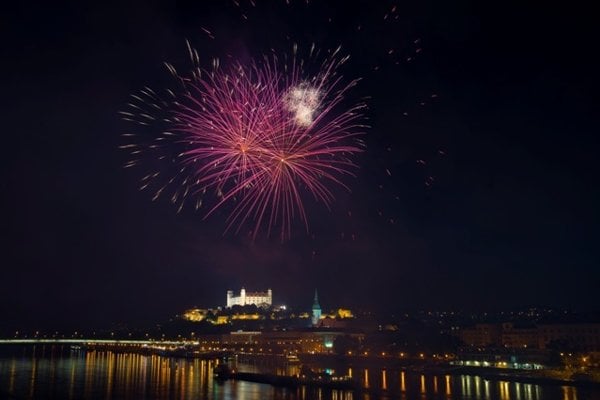 After two pandemic years, Bratislava will welcome the new year of 2023 with street festivities. While the traditional run over the Danube bridges will not take place, visitors can look forward to a lot of music, stands with refreshments and fireworks on the occasion of the anniversary of independent Slovakia.

“Midnight fireworks are not being organised by the capital this year, but professional fireworks are being prepared by the Government’s Office,” Dagmar Schmucková, Bratislava spokesperson, wrote in a press release. “They will be fired from Bratislava Castle, on the occasion of the 30th anniversary of an independent Slovak Republic.

The main programme will take place on Hviezdoslavovo Square. A monumental digital countdown timer will be erected in front of the historical building of the Slovak National Theatre. The timer will be 28 metres long and five metres high. It will be at this site bearing the inscription Bratislava 2023 until January 2.

The music programme featuring a DJ will start after 21:00, and last until 2:00 in the morning. At around 23:45, Bratislava Mayor Matúš Vallo will deliver his speech in person. Then, a countdown accompanied by The Blue Danube Waltz by Johann Strauss will follow.

There will be another stage will be on the Main (Hlavné) Square. The programme will begin at 17:30 with a performance by the children’s band Slniečko. Then music by Oľga Záblacká with her Band, the Czech Roma music band Terne Čhave from Hradec Králové, and Slovak performers will follow. These will include Mango Molas, Hex, and Pavol Hammel. Laco Lučenič and his Satisfactory will play songs by the Beatles, the Byrds, the Rolling Stones and other bands. The evening will culminate with a performance by Ján Kuric and Vidiek.

Operetta, music, a cruise as well as a hike

The Slovak National Theatre invites the public to The Bat operetta, starting at 18:00 in its new building. The Nová Scena theatre will perform the Jánošík musical, about the Slovak version of Robin Hood, at 17:00.

The Red Cat Cabaret Club on Obchodná Street is ready for the New Year’s Eve NeferNefer & Burlesque Show programme starting at 21:00. Visitors can also enjoy New Year’s Eve on the Harmónia luxury boat. The cruise with rich and varied buffet tables and drinks starts at 18:00.

Classical music fans can head to Reduta, where the Slovak Philharmonic orchestra will perform famous melodies like My Fair Lady and Phantom of the Opera. The concert starts at 19:00.

Nature lovers can join a traditional hike on the Devínska Kobyla hill. It will start in front of Istra Centrum at Hradištná 43 in Devínska Nová Ves at 9:30.

On New Year’s Eve, from 23:15 to 1:00 of January 1, 2023, there will be a traffic closure and a tram shutdown in the Jesenského Street – Námestie Ľ. Štúra Square section. Tram line No. 1 will be diverted towards Šafárikovo Square through the tunnel and the Danube embankment. Night lines will run at a shortened interval of every 30 minutes between 23:30 and 1:30. The city promises to dispatch special lines in case of a high number of visitors to the New Year’s Eve celebrations.

The city council promises that enforced municipal and state police patrols along with security guards, firefighters and paramedics will provide security.

“All those who decide to spend the last moments of 2022 on the streets of Bratislava are kindly asked to avoid using their own pyrotechnics or handling glass bottles and other potentially dangerous objects,” Schmucková. In Bratislava, amateur pyrotechnics have been prohibited since 2016. “The intention is to welcome the new year in a friendly and safe atmosphere.”