Joint op-ed of the French and German ambassadors on the 60th anniversary of the Elysée-Treaty. 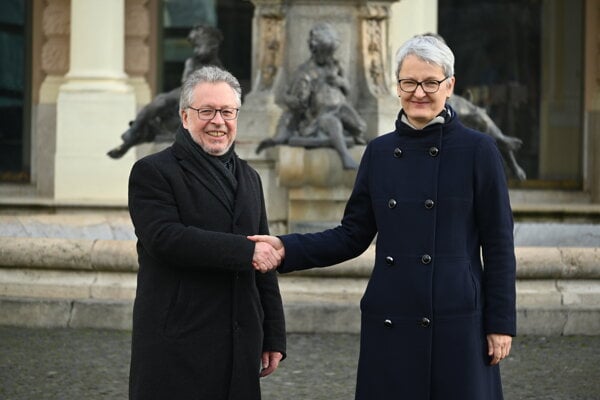 2023 starts with important anniversaries: we congratulate the Slovak Republic on its 30th anniversary and celebrate 30 years of bilateral diplomatic relations among both our countries. We look forward to further strengthened relations, today united in the European Union and mutually protected within the North Atlantic Alliance. And on January 22 we celebrate the 60th anniversary of the Elysée-Treaty, which in 1963 sealed the reconciliation between Germany and France.

On January 22, dem deutsch-französischen Tag, la journée franco-allemande, we send a clear message: France and Germany are the most important partners and closest allies for each other. Our relations are deep and manifold: at the national level, the regional level, between cities, associations, schools, universities, enterprises – between people.

We are constantly working to adapt and further develop our relations. With the Treaty of Aachen (Aix-la-Chapelle) signed on January 22, 2019, we complemented the Elysée-Treaty in order to jointly strengthen the European Union and further deepen our links.

We also aim to continuously attract and mobilise the young generation for the values and goals of the Franco-German relationship. So on this year’s anniversary of the Elysée-Treaty we will introduce a new networkthat brings together bright talents: "Generation Europe – Young Franco-German Talents", committed to sustainable and long-term cooperation. The German-French Ministerial Council held in Paris will also showcase the extraordinary intensity of our cooperation in line with the intense joint work carried out at the end of last year; in particular on the price and supply of energy in Europe and strengthening European industrial policy, which makes it possible to approach the Ministerial Council with a high degree of common ambition and concrete prospects on how to move forward together in Europe and the world.

It is no secret that in some areas we have different backgrounds, positions and interests. But we are working tirelessly to find common solutions precisely on these issues in the interest of our countries and Europe.

Our cooperation serves Europe and the European Union. We are working for a European Union, which is more resilient, more sovereign and more able to act. Our common challenges are huge: we stand together on the side of Ukraine and against Russian aggression. The further development of a European common security and defence policy along with our transatlantic partners is today more important than ever. Due to the war, our energy supplies and global food security are also enormous challenges that we only can face jointly and as a united front. Other issues whose purpose is to strengthen our European capacities and capabilities, include strengthening our industrial and digital sovereignty, as well as consolidating democracy. Our two countries trust and commend Slovakia for its support and cooperation in promoting a stronger, more protective and more united Europe, based on the values of freedom and respect for the rule of law.