Umělec settles down in London

THE INTERNATIONAL Czech-based art magazine Umělec celebrated the grand opening of its new office in London on March 11. To mark the occasion, it also opened the Girls exhibition, a selection of Czech and Slovak video art that visitors to Café Prague on London's Kingsland Road can watch until March 23.
London is the third location, after Prague and Berlin, through which the magazine plans to improve its distribution and seek new ideas for articles 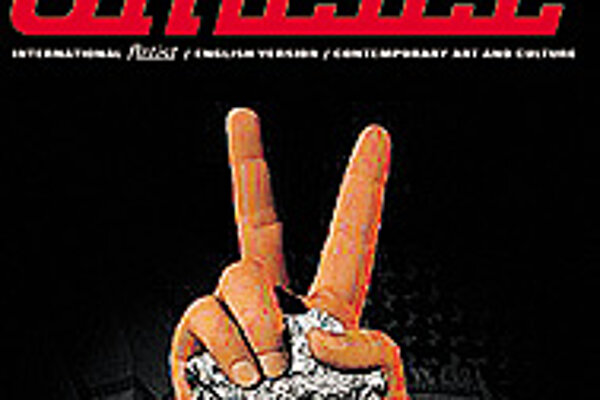 Font size:A-|A+0
THE INTERNATIONAL Czech-based art magazine Umělec celebrated the grand opening of its new office in London on March 11. To mark the occasion, it also opened the Girls exhibition, a selection of Czech and Slovak video art that visitors to Café Prague on London's Kingsland Road can watch until March 23.

London is the third location, after Prague and Berlin, through which the magazine plans to improve its distribution and seek new ideas for articles. It already has an official distributor on the market, but wants to become more visible in the sea of print media.

"We want Brits to know that Prague issues a magazine in their language, which is unprecedented in the art market," Jiří Ptáček, editor-in-chief of Umělec, told The Slovak Spectator.

Umělec was founded in 1997 to explore the international visual arts scene, with a focus on Eastern and Central European artists. Since 2005, it has been published bi-monthly in English, German and Czech/Slovak versions and distributed worldwide from China to Mexico. Continued interest has helped its number of pages to more than triple, to its current level of 96.

Umělec's current issue will come out at the end of April or beginning of May. The editor-in-chief explains that material is submitted a month early. "Then the editing and translating machinery starts," he says.

"The coming issue is in cooperation with Swiss curator Oliver Kielmayer and will partially focus on Swiss culture," Ptáček said. "Then it will be South America's turn. Articles from Argentina and Mexico have already begun arriving, so the distribution in those regions is also under way."

The magazine has a staff of approximately 20 writers that come mostly from the region between Germany and Russia. The London office and growing French team should expand the current group, Ptáček says.

Ptáček acknowledges contem-plating an office in Slovakia, but gave up on the idea.

"Our artistic scenes are well-connected and the creation of formal borders between the two once-united republics only increased the interest for mutual communication. There's plenty of Slovaks in the Czech Republic, though, so it's not difficult to find out what's happening in the country," he said.

Ptáček also considers the magazine to be Czech-Slovak and, therefore, does not translate the Slovak contributions into Czech.

"It makes sense to establish a new office where there are some barriers to overcome. In Slovakia, we have a lot of difficulty finding contributors brave enough to write openly and critically about their personal scene. But this is a problem in almost all small countries, where everyone depends on a social network. So, we will wait to open a Slovak office until really bad times arrive," he joked.

Umělec magazine is a non-profit project financed by foundations, sponsors and the Czech Ministry of Culture. Why did the state decide to support it?

"You should probably ask the ministry, but if I were a minister who had to decide, I would probably say to myself: 'Umělec is the only international magazine on visual culture in the Czech Republic. Moreover, it is published in three languages and, therefore, is a great export.' And then I would add: 'Umělec is critical and independent. As a minister, I should support what is essential for my use of power. That way, I wouldn't be fooling myself and could stay in touch with reality," Ptáček said.