THE RECENT Mediawave festival in Šaľa, which introduces a whole range of arts, also hosted Czech didgeridoo player Ondřej Smeykal who has made this traditional wooden instrument of the aboriginal Australians famous far from its native land. 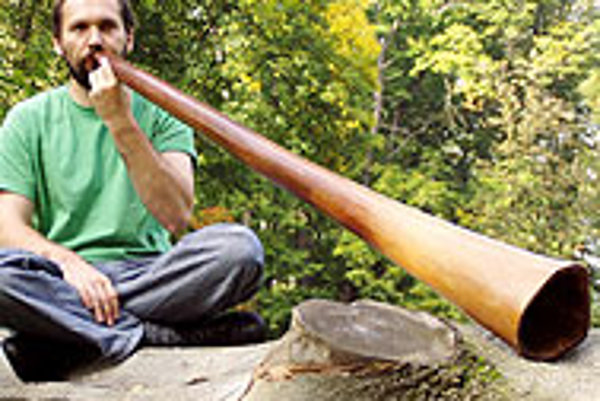 Font size:A-|A+  Comments disabled
THE RECENT Mediawave festival in Šaľa, which introduces a whole range of arts, also hosted Czech didgeridoo player Ondřej Smeykal who has made this traditional wooden instrument of the aboriginal Australians famous far from its native land.

With Pavel Fajt on drums, Smeykal demonstrated how the two instruments complement each other in sound, and then invited Yumiko Ishijima on a special "keyboard" to join them. Later, Smeykal switched the classical didgeridoo to electro-didgeridoo, which intensified its sound.

The Czech musician came to the instrument after the 1989 revolution freed his country from Communism and the borders opened to the world.

"The streets of Prague were filled with didgeridoo players. But it was not until I heard some albums and realised how much variation the instrument allows that my interest in it deepened," said Smeykal, who taught himself to play the didgeridoo.

Watching him sitting cross-legged and blowing gently into the smooth eucalyptus wood, it would seem that mastering the instrument is no problem. Moreover, it looks as though his creativity is boundless, as it seems impossible that he could repeat the same sounds in another performance.

However easy it may look, Smeykal says, there are rules: "Didgeridoo is a rhythmic instrument with some melodic possibilities. The player produces some bass links, as well as makes tone variations that can be written into notes.

"The didgeridoo is a physical thing, something like yoga. It is a kind of breathing exercise. You have to breathe with the rhythm; you must be part of it," Smeykal said.

Traditionally called yidaki, the didgeridoo is over 100 centimetres long, made from a eucalyptus log hollowed out by termites. The end is covered with wax to make it easier to play. Aboriginals believed that if Australia had a voice, it would be the sound of didgeridoo.

The spiritual wind instrument used by Aboriginals at their feasts is nowadays a popular souvenir and its sound is heard worldwide. Some enthusiasts learn to play so well that native Australians also appreciate their art. When Smeykal met Ian Wood, an Australian didgeridoo player living in Czech Republic in the 1990s, Wood was so impressed with his playing that he invited him to contribute to two recordings: Pražské snění (1996) and Wooden Toys (1999).

Smeykal then left for Australia to study Australian aboriginal cave art. He improved his playing techniques and gained some new contacts. Upon his return, he recorded his own album, Didgeridoo Solo (2004).

Apart from promoting didgeridoo at concerts across Europe, Smeykal organizes workshops, sells instruments, records albums and cooperates with other musicians. He is one of those who bring Europeans the "sound of Australia".

"The didgeridoo came to Europe through an underground hippie movement. But what I have noticed is that it has lost its underground image - now I meet businessmen or retired people at workshops," he said, adding that the instrument has also reached Slovakia.

"There are many talented people there, who are fond of playing. However, didgeridoo is a risky thing. One has to decide if he can sacrifice ten years to learn to play it really well."

Smeykal returns to Slovakia this week. On May 19 he will play in Skalica with the Autopilote project - including Fajt and Ishijima.