Residents of Roma ghetto to be moved

THE CITY of Košice has announced plans to divide the Roma inhabitants of its Luník IX suburb into three groups in order to be able to offer better living conditions to those who are willing and able to pay for them. 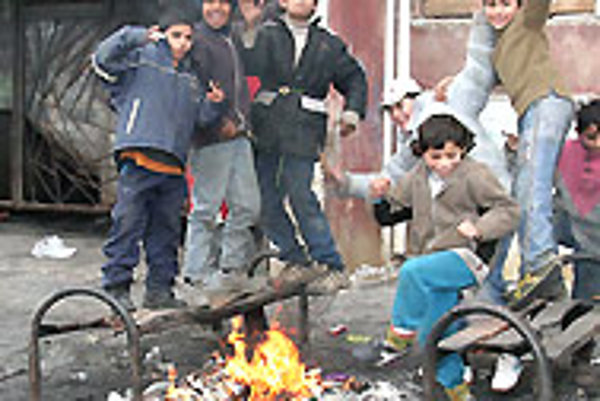 Font size:A-|A+  Comments disabled
THE CITY of Košice has announced plans to divide the Roma inhabitants of its Luník IX suburb into three groups in order to be able to offer better living conditions to those who are willing and able to pay for them.

Luník IX, home to over 5,500 Roma, has long had problems with a majority of its inhabitants not paying for rent or utilities. The suburb's publicly-owned housing estates have built up a debt of around Sk200 million and as a result have had their water, electricity and gas cut off.

The Košice city council hopes that by moving residents who are willing to pay into the same block of flats, it will be possible to offer them better living conditions at the same time as giving non-paying residents a reason to change.

The planned reorganisation includes dividing residents into three groups. The first group would include families who have a valid rental contract, are working towards paying off their debt, which cannot exceed Sk100,000, have been permanent residents of Luník IX for at least five years and are willing to work. These will be moved into flats on Krčméryho Street, which are in better condition than most.

On the other end of the scale in the third group would be those who have a valid rental contract but do not pay their bills regularly and have a debt of less than Sk200,000. These would have to live in the more run-down flats on Hrebendova Street. Those who do not even meet the requirements for the third group might find themselves living on the street.

In order to carry out the project, the city will have to evict many of the current residents of Krčméryho Street to make room for the first group, and Luník IX's Mayor Ladislav Šaňa fears that the moves will cause conflicts.

"People are already saying there will be a war," he said.

Šaňa was also unhappy with the fact that the Košice city council announced their plans without consulting with representatives of Luník IX first.

"I have still not received any official notice," he said. "I only heard about the plan from the newspapers... I think that we should discuss the city's plans with local representatives."

Šaňa thinks the problem would best be solved by building new flats and moving the paying families into them.

"We put forward the idea of building 350 new flats," he said. "So far we haven't had an answer [from the Košice city government]."

Luník IX was designed for 2,500 inhabitants but estimates say the current population is three times as much. The suburb has the highest concentration of Roma in all of Slovakia. It was originally built as housing for police and army officers, but in 1979 a nearby Roma village was demolished and its residents relocated to Luník IX. Over the years the suburb's non-Roma population gradually moved away and Luník IX is now a Roma ghetto. The unemployment rate is almost 100 percent.

The moves should be completed by the end of this year and Ičo said on March 19 that the city will do everything it can to make sure that everything goes smoothly.

"A solution will be found that is the least painful for all," he told the Joj TV channel.