THE YEAR of 2006 ended without any clear winners in Slovak popular music as the female vocalist Tina, Nitra-based band Desmond and Lavagance from Bratislava finished with two Aurels each. The Slovak music academy awards for 2006, known as the Aurels, were handed out on April 18 in Martin. 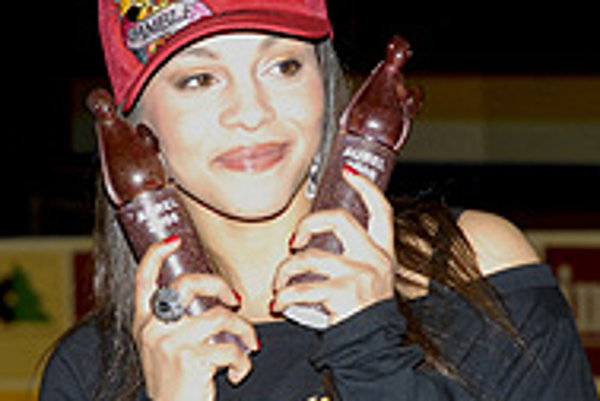 Font size:A-|A+
THE YEAR of 2006 ended without any clear winners in Slovak popular music as the female vocalist Tina, Nitra-based band Desmond and Lavagance from Bratislava finished with two Aurels each. The Slovak music academy awards for 2006, known as the Aurels, were handed out on April 18 in Martin.

Tina was probably the biggest surprise of the Slovak Grammy awards as she was awarded the Best Female Singer and her album Chillin received the Best Album Award. The music academy, which consists of journalists, critics, and music producers, also honoured her co-workers, who participated in her album, Marián Kachút for the Best Sound and Kachút, Peter Graus and Tomáš Zubák as producers.

"It's an incredible feeling," Tina told the Sme daily. "I believed that I would get one, but I did not expect at all that I would get the award for the album. R'n'b is not an in style here in Slovakia. I take my victory as a beginning. I'll see whether I will manage to keep the attention over the next few years," said the young singer.

Desmond won the Best Band award, and their leader Mário "Kuly" Kollár finished as Best Male Singer. The awards confirmed that the band's success at the Slávik, in which ranking is determined by the votes of listeners, was not an accident. Favourite band IMT Smile and singers Peter Cmorík and Robo Grigorov were sent home without penguin statuettes. Peha, a band from Prešov, was awarded Best Song for its hit Spomaľ.

The award for Lifetime Achievement went to Miro Meky Žbirka, who in spite of turning 55 this year still does not plan to retire from music at all. Another Slovak legend, Marián Varga, was awarded Best Instrumentalist of 2006.

Rapper Rytmus, who got the Aurel for the best hip-hop achievement, provided the biggest sensation at the ceremony. After getting the sculpture and the diploma, he raised them over his head and then hurled them down. The sculpture survived unharmed, but the diploma broke into pieces. By this gesture the controversial Rytmus showed what he thinks of Aurels.

Also electronic rock band Lavagance also won two Aurels, one in the category Alternative for its album Back To Attraction and the second as the Discovery of the Year.

Three days before the gala programme in Martin, the academy handed down Aurels in minority genres in Bratislava. Družina band won for its album Tragare in the category folk, ethno and world music. The group Konflikt won the award in the category hard, heavy and punk rock for its album Sapere Aude. The Gospel Aurel went to Trinity Group for the album Na Tisícich miestach. Pavol Bodnár won in the category of jazz and blues for his album Ecce. The Veslári band won the category of country, bluegrass and tramp for its CD Ja pôjdem sám. Marcel Haščič was awarded for the best cover of an album for the cover of Robo Grigorov's CD Balady.