BRYNDZA, said to help prevent cancer, have more than one billion micro-organisms per gram and a large number of different hormones and enzymes, is unique to the country's food industry. This 'white gold', as it is often called, has been produced in Slovakia for hundreds of years. 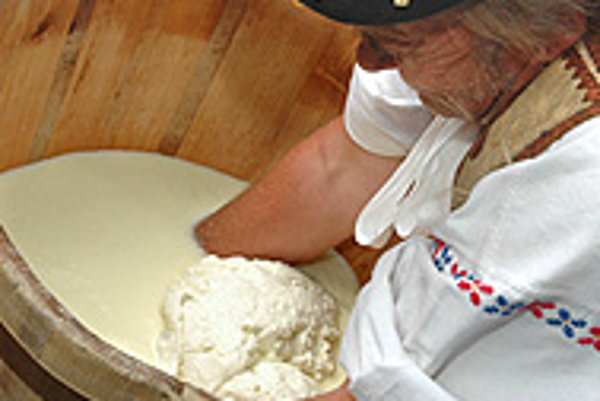 Font size:A-|A+
BRYNDZA, said to help prevent cancer, have more than one billion micro-organisms per gram and a large number of different hormones and enzymes, is unique to the country's food industry. This 'white gold', as it is often called, has been produced in Slovakia for hundreds of years.

Bryndza is a cheese traditionally made from fresh sheep milk. It has remained popular through the reign of Maria Theresia, the Austro-Hungarian Empire and socialism, and now it is fighting for its place on the capitalist market. It is most commonly found in packages of 250 grams and sells for approximately Sk25 (€0.75).

The first packages of Summer Bryndza have recently started appearing on the shelves of Slovak supermarkets. The largest producer of bryndza, a factory in Zvolenská Slatina, will have produced 400 tonnes of this traditional cheese by the end of the season in September. Other kinds of bryndza include Winter Bryndza and Liptovská Bryndza (bryndza from the Liptov region in northern Slovakia).

Founded in 1797, in the times of Napoleon of France, the factory in Zvolenská Slatina has been producing bryndza for more than two centuries, using the same methods as at the beginning and only modernising its equipment and expanding its production line by offering pasteurised bryndza. It has 50 steady employees but this number grows to 70 during peak season.

The factory produces 1,000 tonnes of bryndza every year, with exports counting for around a quarter of the total production.

"Export is growing gradually, as the usage of bryndza has a long tradition in Central Europe," Sven Harman, the factory's manager, told The Slovak Spectator.

The cheese factory is also trying to revive export connections with the US, which collapsed after the weakening of the US dollar.

"At the end of May we sent a 100kg package of bryndza to New York," Harman said, adding that Slovak ex-pats living in Canada and the US contact the cheese factory regularly.

The factory buys milk and cheese from approximately forty suppliers, 10 of which are private shepherds' cabins (salaše). The nearest one is located only five kilometres from the factory.

Harman said that even though paying discipline tends to be good, with a 40 to 60-day maturity, cooperation with supermarket chains is often problematic.

"We have a defensive negotiating position," Harman said, "so we usually supply bryndza for a lower price as asked."

The company receives bonuses during a certain period of the year, usually coming to 10 to 15 percent of the normal price, said Harman.

Zvolenská Slatina mostly produces bryndza using cheese made from pasteurised milk and mixes sheep cheese with cow cheese. There have been many disputes over the benefits of traditional bryndza over pasteurised bryndza. Some experts have claimed that pasteurised bryndza cannot be properly referred to as bryndza.

The debates ended with an agreement that the name bryndza refers to both pasteurised and non-pasteurised cheese. However, if the bryndza is made according to the original recipe using fresh sheep milk, it should be marked as being "made from fresh, non-pasteurised sheep milk".

"The thermal treatment kills the vitamins, hormones and enzymes that bryndza contains," Libor Ebringer, a professor at the Faculty of Natural Science at Comenius University in Bratislava told The Slovak Spectator. Being a microbiologist, he started focussing only on bryndza in 2002, when he heard about a company winning a Slovak Gold prize (award for providing high-quality services) for bryndza made from pasteurised milk.

Having examined the bryndza and having found none of the milk bacteria that the fresh-milk bryndza contains, he published an article suggesting the company won the prize for what he said to be "fake" bryndza. He has been defending the traditional bryndza-making process ever since.

"The traditional bryndza has every bioactive ingredient that the fresh milk has," he said, adding that bryndza made from fresh sheep's milk contains ten times as many milk bacteria species than yoghurt or acidophilic milk.

Ebringer has gone so far in promoting non-pasteurised bryndza that he has set up a research programme with 24 people, including himself, eating 100 grams of bryndza every day for two months. Even though bryndza contains 50-percent fat, nobody put on weight during the study and some of the people reported lower cholesterol and blood pressure. Ebringer said he is preparing a second study for 2008.

The traditional bryndza-making process involves straining sheep's milk through linen into wooden containers. The liquid collected in the casks is called srvátka, and by heating it up, the shepherds make a drink called žinčica. The sediment left behind is matured at a temperature of 30 to 32 degrees Celsius until a cheese paste is formed. It is then left to mature for almost a week. In the end, the shepherds remove the crust from the cheese, melt it and eat it with salt.

Bryndza is the main ingredient a Slovak national dish called bryndzové halušky (dumplings with bryndza cheese and fried bacon). The meal is quite popular among tourists, said Marcel, who works at Slovak Pub in Bratislava.

"Some tourists come only to try the bryndzové halušky," he told The Slovak Spectator, adding that in the peak season, which has just started, the pub serves from 200 to 300 plates of bryndzové halušky.

Bryndza is believed to have originally been brought to Slovakia from Romania by the Valachs who settled in the northern parts of Slovakia from the 14th to the 17th century. The name bryndza has been recognized by the European Union as a Protected Geographical Indication since 2004.