Whips and water: Easter in Slovakia

Easter morning was always stressful for Jarmila Holková. Her father woke her at 6:00 a.m. by pouring cold water on her face, and for the next six hours, young men would come to her flat, drag her outside, douse her with buckets of water and whip her with wicker sticks. 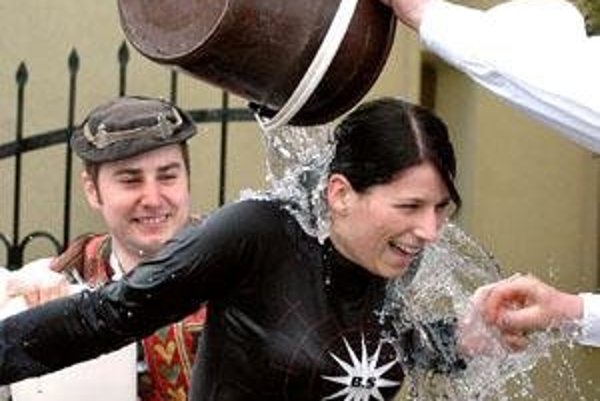 Tradition compelled Holková to give the boys dyed hard-boiled eggs and tie a ribbon around their whips. Her father rewarded them with money and a shot of alcohol.

Holková's ordeal is shared by Slovak women in villages and small cities across the country on Easter Monday - the focus of Slovakia's Easter season. Bands of young men and boys set out to win chocolate and money by whipping - šibať - and pouring water - oblievať - on young Slovak women. The customs, once believed to purify the soul and body, are the remnants of a complex system of Slovak folk traditions based around the seasons of the year.

"Women hate Easter, men love it," said ethnographer Zuzana Beňušková. "But on the other hand, women brag the following day about the number of visits they had."

The water-throwing and whipping became linked to the Easter holiday after Christianity came to Slovakia in the ninth century. But the traditions originated as part of folk beliefs based on nature's cycle, according to the book Slovakia: European Contexts of the [sic] Folk Culture, by ethnographer Viera Feglová.

Mid-April was celebrated as a time of rebirth: processions were used to drive away evil spirits, houses were decorated with vegetation (the egg survives today as a symbol of life), and whipping and water were employed to ensure a young woman's fertility and beauty. It was believed that the vitality from the young twigs entwined in the whip would flow into the woman's body.

While many traditions have died out, Easter Monday's water and whipping have remained a colourful relic of Slovak folk life.

"The days leading up to the date are now seen as Christian by Slovaks," said Beňušková. "But Monday continues to be a day of folk traditions." Even the Slovak name for the holiday - Veľká noc, or big night - seems secular.

There have been some changes. Whipping and dousing were performed in most parts of Slovakia up to the 1950s, but the advent of Communism, which discouraged religious rituals, Christian or folk, and forced the migration of Slovaks from villages to cities, led to their gradual demise, at least in their purest form.

In Slovakia's biggest cities, symbolic reference to the customs - spraying scented water from a small flask - is more common than full-out drenchings and lashings; even in villages and smaller cities, things are not what they used to be.

"They used to throw women in the river that flows through town," said Emília Sekerešová of the southern Slovak village of Detva, population 15,000. "They no longer do that. But they still douse them with water."

Yet the traditions seem to carry a certain charm, even for Slovak women, that may guarantee their continuation.

Holková, at 25, is no longer visited by groups of young men on Easter, but she admits to remembering the Easters of her adolescence with fondness. Nowadays, she would rather celebrate Easter in "peace and quiet", but says she and her friends have found an egalitarian way of sustaining the customs from their youth.

"I go to cottages with friends for Easter, away from the ruckus of groups of boys," said Holková. "And in the morning we go outside and everyone pours water on everyone else - girls and boys."