"My daughter is a prisoner"

"Have you seen where my daughter is locked up?" asked American John Izykowski of The Slovak Spectator May 1. "She's not 'living' in Bratislava with her mother. She's locked up. My daughter is a prisoner in Slovakia."
Izykowski was speaking of his five year-old daughter Emily, whom he hasn't seen since 1998, except for a brief dramatic encounter this past New Year's Eve when he tried to take her back to America with him by force. Slovak police intervened and returned the child to her mother, Eva Slobodová, an American-Slovak who is wanted in the US for kidnapping her own daughter.
Slobodová, who was born in Czechoslovakia but emigrated to the US with her family in 1968, left America with her daughter in 1998 without telling Izykowski. She applied for and received Slovak citizenship for Emily and herself last June. 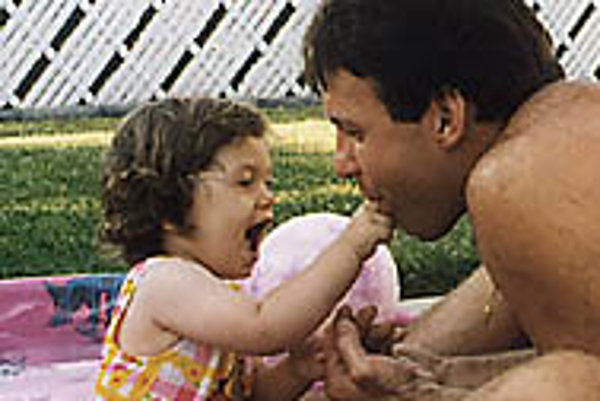 "Have you seen where my daughter is locked up?" asked American John Izykowski of The Slovak Spectator May 1. "She's not 'living' in Bratislava with her mother. She's locked up. My daughter is a prisoner in Slovakia."

Izykowski was speaking of his five year-old daughter Emily, whom he hasn't seen since 1998, except for a brief dramatic encounter this past New Year's Eve when he tried to take her back to America with him by force. Slovak police intervened and returned the child to her mother, Eva Slobodová, an American-Slovak who is wanted in the US for kidnapping her own daughter.

Slobodová, who was born in Czechoslovakia but emigrated to the US with her family in 1968, left America with her daughter in 1998 without telling Izykowski. She applied for and received Slovak citizenship for Emily and herself last June.

But regardless of how they got citizenship, they now have it. And that fact, said Justice Minister Ján Čarnogurský April 25, prevents Slobodová or Emily from being sent back to the US against their will - Eva to face criminal charges, and Emily to be reunited with her father, who under US law has full custody rights.

Čarnogurský said he based his decision on the rights assured to Slovak citizens in the Slovak Constitution, which states that a Slovak citizen cannot "be forced to leave the country, (s)he cannot be expelled from the country or extradited to another state".

Furthermore, Slobodová cannot be charged with kidnapping here in Slovakia because she left America before a 1999 court decision granted Izykowski full custody of the child (see timeline, this page). "She could only be charged here with kidnapping had she left the US after the 1999 court decision which gave the father full custody," said Tomaš Plank, the lawyer representing Izykowski.

The international custody battle, which has moved on to the Slovak Supreme Court (a decision is expected in June), has left Izykowski edgy and distrustful, refusing to grant a full interview until Plank called him with the go-ahead. "How do I even know you are a newspaper?" he asked. "Why would I tell you anything about the case? How do I really know you work for The Slovak Spectator?"

Izykowski and Slobodová were married in 1994. Although their marriage lasted only a year, the couple had Emily during the short union.

US courts granted Slobodová custody of the child after she filed for divorce in 1995, with Izykowski being granted visitation rights. But in an interview with the Slovak weekly magazine Život (the only interview she has given in Slovakia - Slobodová declined to be interviewed for this story), she said her ex-husband exhibited "aggressive and strange" behaviour around her and Emily.

"Emily would hide from him when he was supposed to visit," she said. "She would hold tight to the railings in front of the house and wouldn't let go. She'd cry and repeatedly say 'no, no, no'."

Slobodová asked the court to revoke Izykowski's visitation privileges in 1997 and again in 1998. Both requests were rejected. After the first appeal, the court ruled that the child would be supervised under a "common parenthood", an agreement which dictated that decisions affecting the child be agreed upon by both parents.

A week after the second request was rejected, Eva sent a fax to her lawyer saying that she was going on vacation with Emily. She never returned to America. "I saw no other way out but to run away," she explained later.

Once it was discovered that Eva had fled the country with Emily, a US court gave Izykowski full custody of his daughter on August 21, 1998 and Eva was charged with kidnapping the same day. As kidnapping is a federal crime in the US, the case was taken over by the Federal Investigation Bureau (FBI) in September that year.

Frustrated, Izykowski hired a private investigator to help determine the whereabouts of his ex-wife and daughter. Meanwhile, in Bratislava, Emily and Eva were starting a new life, moving into a flat on Špitálska Street in downtown Bratislava.

With the aid of the hired investigator, Izykowski finally located his daughter late last year. He boarded a plane and came to Slovakia, setting up the tense confrontation of December 31, 2000, in which Izykowski tried to take his daughter with him back to America.

According to January press reports, Izykowski and another man put Emily into his car while he and Eva shouted at each other on the street. Bystanders called the police, who returned the child to Slobodová and took Izykowski to the police station for questioning.

"My client didn't know then that they [Eva and Emily] had already become Slovak citizens," lawyer Plank said April 30. "But as the father of the child with full custody rights, he should have been informed of this development. No decisions concerning his daughter should have been made without both parents agreeing to them."

Plank said that Emily's Slovak citizenship was granted "in conflict with existing Slovak laws" because the child's father was not consulted. "They never checked with the US embassy about the father's whereabouts," he said.

Anna Čižniarová, the head of the Interior Ministry's section which issues citizenship, refused to comment on the Izykowski case, saying April 27 only that she had "had no reason not to issue Slovak citizenship to Eva's daughter Emily. It's normal practice for children to be given the same citizenship as their parents. And in this case there was no reason to act differently."

Izykowski, for his part, says that he is "prepared to leave any moment" from Chicago to get his daughter back.

"My daughter was born in the US and she did not ask to be kidnapped to Slovakia," he said. "She knows I will take her home. She has a family here and that doesn't change just because her mother decided to steal her away."

November 5, 1994 - American John Izykowski and Czechoslovak-born US citizen Eva Slobodová are married in Chicago, Illinois.
October 24, 1995 - Slobodová files for divorce.
January 6, 1996 - Daughter Emily is born. US court decision grants custody to Slobodová with the father allowed visitation rights.
October, 1997 - Slobodová asks US court to revoke Izykowski's visitation rights. Request is denied.
December 1, 1997 - Court rules that Slobodová and Izykowski will parent Emily under "common parenthood", which dictates that all decisions affecting the child must be agreed upon by both parents.
July 23, 1998 - Slobodová again asks court to revoke father's visitation rights. Request is again denied. One week later, Slobodová tells her lawyer she's going on vacation with Emily. She never returns to the US.
August 18, 1998 - Date on which Slobodová said she would return passes.
August 21, 1998 - US court issues preliminary ruling granting full custody to Izykowski. State of Illinois charges Slobodová with kidnapping.
September, 1998 - Federal Bureau of Investigation (FBI) takes over the case.
November 11, 1998 - FBI issues federal warrant for Slobodová's arrest.
November 9, 1999 - Court confirms earlier decision granting Izykowski full custody.
June 2, 2000 - Slobodová and Emily are granted Slovak citizenship by Interior Ministry.
December 31, 2000 - In Bratislava, Izkowski tries to forcefully take his daughter back to America. Police prevent him.
April 24, 2001 - Justice Minister Ján Čarnogurský says that because Slobodová and Emily are Slovak citizens, they cannot be turned over to US authorities.