With the fate of a law on money laundering hanging in the balance as The Slovak Spectator went to print September 21, questions were once again being raised over the price the country may be paying for irresolution within the government coalition.
Amendments to the country's 1994 law on money laundering had been previously approved by parliament in June but were returned to the house in July by cabinet, which was using powers inherited during President Rudolf Schuster's critical illness. In addition to the refused bill, the government sent an entirely new set of amendments to parliament which, it said, corrected grave deficiencies in the earlier draft. 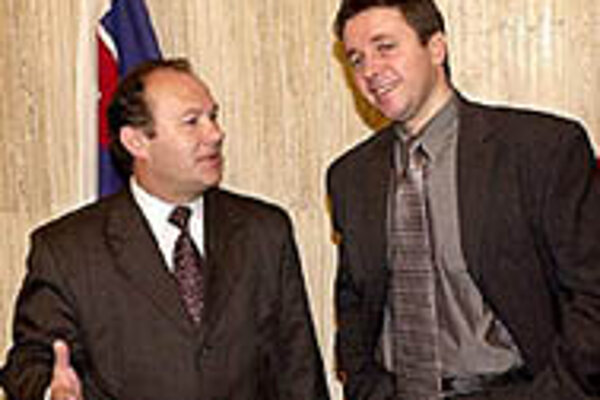 Font size:A-|A+  Comments disabled
With the fate of a law on money laundering hanging in the balance as The Slovak Spectator went to print September 21, questions were once again being raised over the price the country may be paying for irresolution within the government coalition.

Amendments to the country's 1994 law on money laundering had been previously approved by parliament in June but were returned to the house in July by cabinet, which was using powers inherited during President Rudolf Schuster's critical illness. In addition to the refused bill, the government sent an entirely new set of amendments to parliament which, it said, corrected grave deficiencies in the earlier draft.

The latest government move has left parliament with a direct decision between the two sets of amendments. However, the choice to return the earlier bill has pitted those who argue the need for haste in fighting organised crime against those who counsel caution and the need for air-tight legislation.

The submission of the latest amendment has also created a delay in putting any new law into effect, a delay that analysts have said is making a mockery of the government's claims to be fighting corruption and cleaning up the business sector.

"The government is contradicting its own decision to fight corruption in doing this [originally sending the bill back to parliament]," said Peter Zajac, a member of the Democratic Party (DS) within the coalition government and one of the proposers of the original amendment to the 1994 law. "[Even if] it should draw attention to some of [what it claims] are the weak parts of the amendment and then let those parts be reworked, it made the worst possible decision and returned the amendments as a whole to parliament."

As part of its plans to fight corruption and reform Slovakia's financially and legislatively weak corporate sector, the government had declared that changes were needed to existing money laundering legislation.

The key, cabinet said, was to give financial police greater scope to investigate suspicious sums of money held in bank deposit accounts. If such money could be shown to have criminal antecedents in the drug trade or prostitution, for example, the police could prevent it from being plowed back into legitimate businesses - a process that allows criminals worldwide to 'wash' their ill-gotten gains with the sheen of respectability.

However, when President Schuster fell ill in late June, his powers were transferred to the government, giving cabinet officials the power of final consent to the law passed by parliament. When consensus remained beyond reach, the bill was returned to parliament amid recriminations from its supporters, such as Deputy Prime Minister for Economy Ivan Mikloš, Interior Minister Ladislav Pittner and Justice Minister Ján Čarnogurský, all of whom claimed that the bill had been sabotaged by government members who had been against the amendments since their original conception.

Ján Langoš, DS chairman and the man who orginally submitted the amendments, claimed that Deputy Prime Minister for Legislation Ľubomír Fogaš had been the prime mover behind the rejection of the bill. Fogaš objected that the bill had been unclear and had violated legal standards - a claim whose truth the government's own legislative department has admitted.

The first (June) amendments increased from the 1994 legislation not only the legal punishments for people found guilty of money-laundering, but also the powers of financial police to demand information on deposits from banks and other financial institutions. It decreased the sum of money on deposit for which the financial police could ask for details to 50,000 crowns ($1,000).

In arguing against these changes, Fogaš said that the draft might have given financial police access to confidential information at banks without saying how abuse of this information could be avoided or punished.

Other government figures have agreed that the original proposals were not derailed for lack of courage in fighting corruption, but because of real concerns, such as the threat they posed to the activities of key banking institutions within the financial sector. Michal Ivantyšyn, coordinator of the managing commitee for the government's Campaign Against Corruption, said that the National Bank of Slovakia especially had raised objections to the original draft. Representatives of the bank were unavailable for comment on the issue.

Divided between those arguing the virtues of haste and those insisting on legal infallibility, cabinet returned the first bill to parliament with a recommendation that it not be passed by deputies. In the meantime, the government's legislative department began drawing up a new set of amendments in the hope that the virtues of new packages would be appreciated by parliament.

But the dispute wouldn't be quieted. Langoš in particular was critical of the July rejection, arguing at the time that even if there were some points of the proposed amendment package that were legislatively weak, it would be better to have approved even an imperfect draft to correct the woeful 1994 legislation and show cabinet unity in the fight against corruption, and then to have refined the law after it came into effect.

His claims were backed by legal expert and independent MP Peter Kresák. "It's better to approve a bill, even a slightly unclear one, for a certain period and then change it for a better, perfect one," he said.

Ondrej Dostál, DS spokesman, added: "Present mechanisms existing in Slovakia are not sufficient to uncover money laundering. More pressure needs to be put on financial institutions in the fight against money launderers."

With no new law yet in effect, both ministers and economic analysts have argued that further delays are only hampering the fight against money launderers.

Foreign analysts have said that as part of a combined set of economic reforms, including a recently passed bankruptcy law, the quick implementation of a money laundering law was vital, and that the government's commitment to fighting corruption at all levels was key to swinging decisions by foreign investors in Slovakia's favour.

"It would create a more positive image of Slovakia," said Ivan Chodák, analyst for CAIB in Bratislava. He added that a money laundering law would help investors perceive the country "in a more positive light" and strengthen its claims to be cracking down on corporate sector corruption. "It's just another part of the jigsaw puzzle in the fight against corruption," he said.

Michal Kustra, an analyst at Tatra banka, added that the implementation of the money laundering law was important for pushing the Slovak economy closer to European Union standards and the country as a whole towards the 15-member bloc. "To have good legal norms is essential for Slovakia, if only because it's a preparation [and a prerequisite] for European Union membership."

But those in the cabinet who turned down the original bill have said they have precisely those goals in mind. Speaking at a September 19 press conference, Fogaš said that the latest set of amendments prepared by the government's legislative department fell in line with European Union guidelines on fighting crime in the corporate sector.

Nevertheless, analysts have said that combined with a November 11 referendum on early elections recently declared by the president, the perceived political disunity behind the July decision to reject the original bill and the continued political wrangling over its successor will do little to persuade investors of the stability of the coalition and entice them to direct important funds into Slovakia in the form of FDI dollars.

Despite the negative press from the July rejection, the new government package is, its supporters claim, more precise in its legislation, will cut a more effective swathe through money laundering, and reflects the coalition's true commitment to rooting out corruption in Slovakia.

"This package is clearer on legislation, defines more precisely what had been ambiguous [in the previous amendments], and also states clearly who is responsible for any damage to a financial institution following the release of protected bank information to authorities," said Fogaš. He added that the new package would allow banks to disclose the identification only of account holders whose deposits totalled over 100,000 crowns, doubling the threshold from the previous amendments and exempting more modest deposits from scrutiny.

The Deputy PM added: "This legislation is in no way weak, and will put a stop to money laundering."

The Campaign Against Corruption's Ivantyšyn said that the amendment package was testament to the coalition's continued determination to battle corruption. "The fact that the government authorised the Interior Minister, Ladislav Pittner, a man who radically wants to fight corruption, to come up with the new proposals, proves that the government is standing up to the problem of corruption," he said.