Miroslav Majoroš became the general director of IBM Slovakia on January 1, 1998, breaking the firm's string of three consecutive foreign directors. At the time, Majoros said that "my Slovak origins will help me communicate with customers better than my predecessors."
After over fourteen months in the top post, the numbers support Majoroš's earlier predictions. IBM has significantly narrowed the gap between themselves and Compaq in hardware sales. On February 9, The Slovak Spectator sat down with Majoroš to discuss the current and future plans of IBM Slovakia. 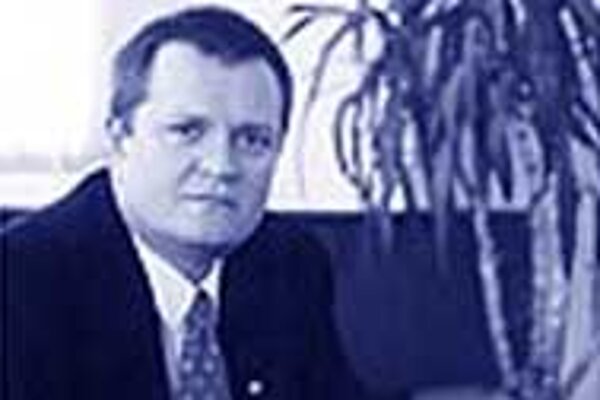 Font size:A-|A+  Comments disabled
Miroslav Majoroš became the general director of IBM Slovakia on January 1, 1998, breaking the firm's string of three consecutive foreign directors. At the time, Majoros said that "my Slovak origins will help me communicate with customers better than my predecessors."

After over fourteen months in the top post, the numbers support Majoroš's earlier predictions. IBM has significantly narrowed the gap between themselves and Compaq in hardware sales. On February 9, The Slovak Spectator sat down with Majoroš to discuss the current and future plans of IBM Slovakia.

The Slovak Spectator (TSS): IBM's customer base in Slovakia has traditionally been mainly the banking industry and larger corporations - former IBM General Manager Espen Ramsbacher said in November 1997 that "we are particularily strong in the banking sector, with a 65% share." Is this still the case?

Miroslav Majoroš (MM): My feeling is that we have grown in the [banking] sector, especially with larger banks. According to Mr. Ramsbacher, the total was 65% in 1997, but I think it's higher now.

TSS: Slovakia's economic crisis has hit banks and large corporations hard. How has this in turn affected IBM?

MM: 1998 was a very good year with our corporate customers, and this has carried over into this year. The reason behind [the carry-over effect] is that our larger customers are usually involved in big projects and services. Such ventures take time to complete, and we have a few projects from last year that are continuing. But I agree that especially in the public and banking sectors, investment has slowed down at the moment. In the industrial sector, there has been basically no change because we had almost no business with them last year, if we are talking about big business.

What we want to do now is to focus on small and medium-sized firms and to try to compensate in this area for what we feel will not come from big corporations. In the smaller and medium enterprise sector, it is very important to have good relationships with business partners. IT companies are working with us, dealing with us, and we would like to develop these business channels this year.

I believe that in the third quarter, the market will take off and we will see new investment begin again as well as some new projects. But the first two quarters, mainly in private and state corporations and in banking, it will be quite... how can I say it without offending anybody?...

TSS: Has IBM devised any strategies to help the companies it depends on for business?

MM: It's hard to help companies whose business base has been shaken or moved. Unfortunately, many Slovak banks at the moment are in a situation comparable to that following the [1989 Velvet] revolution - we have seen huge change, and there is now new management. Many IT projects that were started [under the old management] have not yet been finished. The new management must now first decide what their strategy will be.

We have a lot of know-how and can offer different projects to help banks, but they must first decide what they want to do. Of course, we are talking about big banks, state owned banks, because the mid-sized banks, which usually have western investment, are doing quite well and are in very good shape.

This situation is not unique [to Slovakia]. I think that the same situation exists in the Czech Republic, Hungary and Poland as well because the influences on the banking sector, mainly state-owned, are not just a result of the change in government. There have also been huge changes in the financial markets of central and eastern Europe. But, to help them? We have been helping them so much over the past years that I think it is time they should try to help us.

TSS: New technologies in Slovakia have had mixed results. For example, GSM mobile phone technology, which has been on the market for only two years, has taken off far beyond expectations. Home computers, on the other hand, have never made much headway. How will IBM convince people that they need computers like they need mobile phones?

MM: Well, I don't think that people need computers at all. I think that they need information. It is not necessary to have a computer if you want access to information. This is our strategy.

For big business, we talk about this quite often and it is a very important thing that we are trying to explain to our clients. It's called "pervasive computing," which means that you can find data through all equipment you use in your daily life, like mobile phones, televisions, specialised navigating systems in cars and so on. Our strategy for the next few years will be to integrate technology into people's daily lives, and not [limit their information needs to] computers.

Personally, I feel that PC's are so complicated that some common people have difficulty using them. This is true not only for businesses, but also for people who use them just for fun or for getting information. Many people don't know anything about computers, but they still need information. So, [the 'pervasive computing' strategy] will probably be an interesting move. Of course, there are not too many products on the market right now, but that will change very soon.

TSS: What specific market tools will IBM use in pursuit of its'pervasive computing' strategy?

MM: Well, of course I have been talking about IBM's global strategy. For Slovakia, we will follow the global strategy and when businesses reach international levels and when the products are available here, we will present them. At the moment, though, what we are offering is our technology plus our services. We are especially trying to promote our electronic business [business done on and through the Internet] strategy, mainly for financial, wholesale and retail markets where we see many opportunities.

In Slovakia, however, only 6% of households have computers and maybe 2% have computers connected to the Internet. So promoting electronic business on a public basis is, unfortunately, not realistic. What we are trying to do is to create a so-called 'business to business' community to offer companies technologies and opportunities to connect with each other and allow business to be done on the Internet.

TSS: Does IBM have any sponsorship or partnership plans with Slovak schools in 1999?

MM: It's very hard for me to explain our programmes with schools because IBM, as an American company, is quite careful about investing in marketing and advertising in this territory. So what we are talking about is academic initiatives mainly with universities. We don't do too much with secondary schools and we do almost nothing with primary schools. In universities, we are trying to help them get the latest technology, but I do not like the idea of giving computers to somebody for free when they will use them mainly for the Internet or perhaps for some games.

We would like to offer something else, such as specialised systems for technical schools, engineering schools and so on. We will probably start such programmes this year. But we would like to target our activities more at the development of young people's technological and communication skills vis a vis the possible new investors that will come to Slovakia.

For example, Volkswagon has really had problems getting people with an engineering education, and if new investors arrive, they will have the same problems. The reason for this is that schools do not have the equipment to properly educate their students.

I cannot promise that, for example, we will deliver 200 or 500 or some number of computers to some schools - I don't believe that makes sense. To organise a common project between a university and some company or producer in some market segment, and then to educate and develop people makes more sense. Students who complete such projects will not only act as messengers for our technology, they will also [contribute to] our economy here in Slovakia.

We usually don't have much money for such activities, however, but this is not our choice - our American friends are really very tough on expenses.