US woos Slovakia on Iraq

SLOVAKIA has been asked to pledge its support for US-led military action in Iraq with or without the blessing of the United Nations, as western European leaders become more vocal in their opposition to such a move.
Commentators note that the push for Slovakia to take sides puts the country in a delicate position, as it is slated to join both the EU and NATO in 2004.
On January 26 Prime Minister Mikuláš Dzurinda received a diplomatic note from Ronald Weiser, the US ambassador to Slovakia, that laid out specific demands for Slovak aid in the event of a possible attack on Iraq. 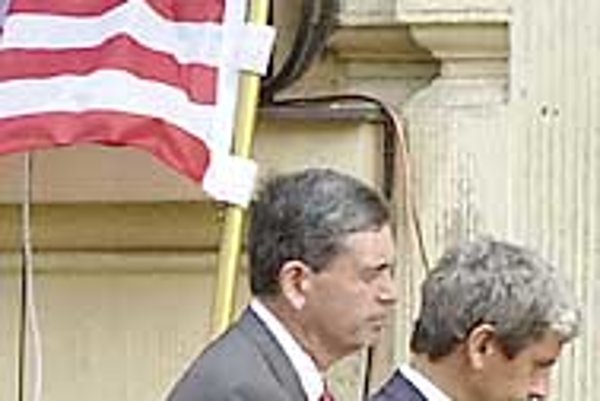 Font size:A-|A+
SLOVAKIA has been asked to pledge its support for US-led military action in Iraq with or without the blessing of the United Nations, as western European leaders become more vocal in their opposition to such a move.

Commentators note that the push for Slovakia to take sides puts the country in a delicate position, as it is slated to join both the EU and NATO in 2004.

On January 26 Prime Minister Mikuláš Dzurinda received a diplomatic note from Ronald Weiser, the US ambassador to Slovakia, that laid out specific demands for Slovak aid in the event of a possible attack on Iraq.

Three days later, the cabinet proposed that a military chemical unit consisting of 75 volunteers be sent to the Persian Gulf to deal with possible consequences of the use of chemical or biological weapons.

The motion states that Slovak soldiers should be deployed only after a UN resolution is passed authorizing the use of force.

"We are in favour of a peaceful resolution of conflicts, but both Europe and our homeland have a history that tells us that appeasing aggressors does not lead to peace," Dzurinda said.

The government also agreed to open the country's air space to coalition forces led by the US, and allow allied aircraft to land on its territory.

The deployment of Slovak troops in the gulf still has to be approved by parliament, which is scheduled to debate the issue on February 6.

It is unclear how politicians will vote on this measure. The Christian Democrats, from the ruling coalition, however, have said they need more time and information before they can commit to sending Slovak military personnel to the Persian Gulf.

Analysts suggest that the US request for support from former communist countries may end up polarising Europe.

"I think [the US request] serves a twofold purpose. First of all the US may need air corridors for its aircraft. But second of all, there is certainly a political effort to gain broader support for the action of the US, since there are different opinions about this in Europe and it is very important for the US that this action be supported by as many countries as possible," said Grigorij Mesežnikov, head of the Institute for Public Affairs think tank.

"Even though the US is being accused of unilateralism, it is trying until the last minute to gain broader support, particularly bearing in mind recent experiences with the situation in the Balkans and the attitude of some countries towards the situation in Iraq," said Mesežnikov.

The leaders of France and Germany recently expressed their opposition to military action without a UN mandate, instead suggesting that the weapons inspectors be given more time to discover what arms Iraqi president Saddam Hussein does or does not have.

This open opposition to the US stance caused US Defence Secretary Donald Rumsfeld to dismiss those western European countries as "old Europe".

"If you look at the entire NATO Europe today, the centre of gravity is shifting to the east. Look at vast numbers of other countries in Europe. They're not with France and Germany on this. They're with the United States," Rumsfeld said.

This opinion angered many in Europe, including one Bratislava-based Western diplomat who declared: "It's not up to the Americans to decide who is who in Europe. It's up to ourselves to unite our views to the greatest extent possible."

Although Dzurinda insists that the Iraqi crisis is not connected to the country's imminent NATO membership, still waiting to be approved by NATO members including the US, not all experts agree.

"The basic questions that the US will be asking itself when admitting new members [to NATO] are whether these countries share the same values and attitudes as the US, and whether they are willing to actively participate on security," said political scientist Ľuboš Kubín from the Slovak Academy of Sciences (SAV), adding that because of this, he thinks Slovakia will agree to support a US-led attack.

But while a decision to support the US might ensure Slovakia's membership of NATO, it could jeopardise Slovakia's successful EU integration.

"It would be regrettable if on such an important matter European countries and future members of the [EU] couldn't come up with more or less the same point of view," said the Bratislava-based Western diplomat.

He added that Slovakia should try to stick to the position taken by most EU countries.

"I think that future member states are already observers in the process of common foreign and security policy and that they should try to unite themselves with the policy of the EU as far as possible," the diplomat said.

However, other observers are less certain that a pro-US stance would seriously threatened the country's EU integration.

"Even if there are different opinions about the attitude towards [an attack on] Iraq in Europe, Slovakia will not be alone [if it takes] a pro-American approach. The majority of EU countries are likely to support the US action [when the time comes]," said Mesežnikov.