The most important things you need to know how to say in Slovak around this holiday season are probably Merry Christmas (Veselé Vianoce) and Happy New Year (Šťastný Nový Rok). 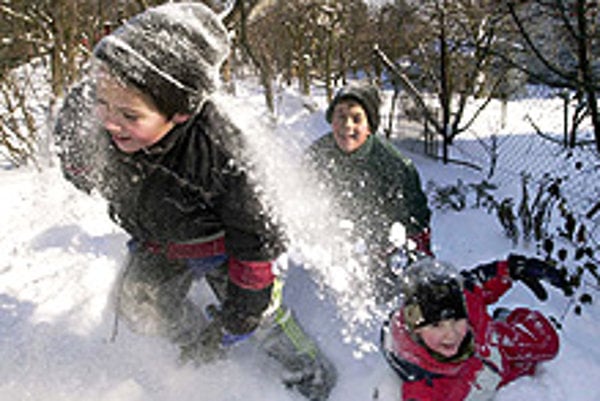 Slovak Matters was a bi-weekly column devoted to helping expats and foreigners understand the beautiful but difficult Slovak language. This article from Slovak matter was first published on December 15, 2003.

The most important things you need to know how to say in Slovak around this holiday season are probably Merry Christmas (Veselé Vianoce) and Happy New Year (Šťastný Nový Rok). Astute and dedicated readers of Slovak Matters may complain that we have covered this material in years past, but some things need reminding. Certainly over New Year's Eve, some of us may forget a thing or two.

There is much to remember of Christmas, however, in the way of traditions. Starting with the most familiar, the gift-giving spirit here goes by the name of little Jesus (Ježiško) or by the nonreligious, communist pseudonym Father Frost (Dedo Mráz).

I suspect that the latter name will lose some of its credibility this year, after the recent bribery scandal involving a municipal official of the same name.

For those who love to give gifts, it is important to know how to ask "Have you written your letter to Santa yet?" (Písal si už list Ježiškovi?), and "What did you get under the Christmas tree?" (Čo si dostal pod stromček?). For those who like to get gifts, you should probably practice saying "Thank you very much, it's great!" (Ďakujem veľmi pekne, je úžasný!).

Other traditions include abstention from eating meat on December 24. The prohibition resulted in the tradition of eating carp (kapor), an acceptable alternative to meat, for Christmas Eve dinner. Holiday observers encourage their children to keep the fast (pôst) until dinner by telling them that they will see a little golden pig (zlaté prasiatko) if they succeed.

There are also ways to prepare psychologically for the coming year. Slovak mothers might put a honey cross on the foreheads of their children to ensure a year's worth of good behaviour. My (married) co-worker says that her mother still does this to her every year. In another case, an apple is split horizontally across the middle and, if it is fresh inside and the core forms the shape of a star, the family will stay healthy and meet again in a year. On the other hand, if the flame of a candle leans toward someone, or the smoke from a wick they extinguish sinks and curls instead of rising in a straight line, the unlucky person will be ill or, according to some interpretations, die.

On a lighter note: snow. When snowflakes (snehové vločky) fall thickly enough and the strong wind blows them everywhere in a heavy snowstorm (fujavica), the next day everything seems as white as in a fairytale (bielo ako v rozprávke). Children, then, can be found rushing outside yelling, "let's go balling" (poďme sa guľovať), by which they mean throw snowballs (snehové gule). Otherwise, they might build a snowman (snehuliak), or go sledding (sánkovať sa). Meanwhile, adults can be found trudging out to shovel snow from the sidewalks (ohŕňať sneh z chodníkov). Though sometimes it is the other way around.

It is very popular to ski (lyžovať sa), and many hotels or cottages in the hills and mountains have their own little ski slope (lyžiarsky svah) and ski lift (vlek). Perhaps these small slopes are set up just to get guests cold enough to start thinking about a hot bowl of soup or some mulled wine (varené víno).

When it is cold enough to freeze over, so cold it cracks (mrzne až praští), the hockey players (hokejisti) and others set out to go ice-skating (korčuľovať). Meanwhile, some people just slide around on the icy pavement (šmýkačka) on their shoes and, eventually, the seat of their pants, as I did very memorably last winter while trying to meet a train.

No matter what they do, everyone outside ends up frozen to the bone (zmrznutý na kosť), and may be inclined to hurry back inside crying, "it's a scythe" (to je ale kosa), meaning that it is very, very cold outside. When I first heard this I though it had something to do with the New Year, when Death slices off another bit of our lives. But it doesn't.

The favoured way to celebrate Silvester, as New Year's Eve is inexplicably called, is a New Year's Eve party (Silvestrovská veselica). Either in a cottage in the woods with your friends or at a nightclub, you can count down to the start of the New Year (odpočítavať Nový Rok). Along the way you can toast with the words "let's drink to the New Year" (pripime si na Nový Rok), or the standby "to your health" (na zdravie).

I will not teach you any others or I might be to blame on January 1 when you have a monkey (mať opicu), that is, when you have a hangover. I still have not learned any secret Slovak hangover cures, and besides, it pays to behave on New Year's Eve because as things go on New Year's Day, so they go for the rest of the year (ako na Nový Rok tak po celý rok).