"WHEN Levi Strauss started producing jeans as work trousers for US farmers, he had no idea they would one day be a hit that would affect all of Europe," said Blanka Landová, a historian at the Museum of Slovak National Councils in the western Slovak town of Myjava and the curator of its recently opened exhibition. 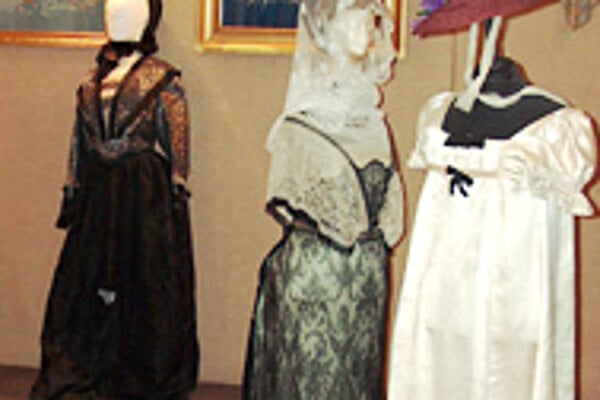 Font size:A-|A+  Comments disabled
"WHEN Levi Strauss started producing jeans as work trousers for US farmers, he had no idea they would one day be a hit that would affect all of Europe," said Blanka Landová, a historian at the Museum of Slovak National Councils in the western Slovak town of Myjava and the curator of its recently opened exhibition.

Entitled From Crinolines to Jeans, it presents local women's fashion developments from the second half of the 19th century up through today. There are over 70 pieces on display that cover everything from the designs of the rococo period up to the latest trends.

The display starts in the "second rococo period", the last time crinolines were used. One of the oldest displays features heavy pelerines from around 1850, which are unique for their amazing tiny pearl embroideries. The display continues with the art nouveau style of tight-fitting dresses, followed by the shortening and loosening of 20th century fashion. This was the time that women started putting their corsets away, opening the era of emancipation.

"As long as a woman had to wear a corset, she was constantly dependent on someone to help her in and out of it. Throwing [corsets] away was a symbol of emancipation. Some women even refused to wear bras," Landová said.

The modest fashion of the period after the second world war - when fabric, like food, could only be bought with tickets - eventually evolved into more elaborate designs.

The 1950s were marked by stiff dresses that restricted movement; the 1960s by minis that barely covered the legs. And then came the revolutionary break: jeans. They developed along with other styles, like ethno and folk, and the marginal fashion of certain groups, such as skinheads or hippies, came into prominence.

While each exhibited model is unique, as is the fashion of each period, one thing can be said about style in general: Fashion has always reflected the economic situation of its era and individual styles or techniques are repeated.

"We can talk about fashion comebacks," said the curator, singling out the example of the 1873 wedding dress design at the exhibit, which resurfaced exactly 100 years later, or the pleating technique of the 1920s that is present in the latest designs.

Landová's favourite style is from the period of the Charleston, the beginning of the 20th century. "It was a time of loosening lines, covered knees, and the end of corsets - the kind of fashion that covers and can be worn by anybody."

The exhibition, at the Múzeum Slovenských národných rád (Museum of Slovak National Councils) in Myjava, is open Monday to Friday from 8:00 to 16:00 until February 28. It is situated in the reconstructed house of Anna Kolényiová, at Štúrova 2, where the national council first held a seat.

The museum's exhibits can also be admired during special evening tours (also in English) accompanied by a guide dressed in a period costume. To book a tour, call 034/6212-256 at least three days ahead.