Power is in unity

A SINGLE voice might sound beautiful, but lonely and weak. Only several voices bring real harmony and power.
A group of young Slovak composers has grasped this basic principle very well. They brought together their talents, intelligence, and organisational skills to create an association to promote contemporary music - the music of their generation. 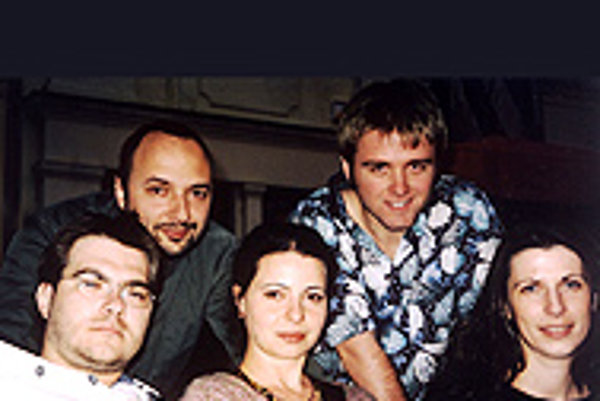 Font size:A-|A+
A SINGLE voice might sound beautiful, but lonely and weak. Only several voices bring real harmony and power.

A group of young Slovak composers has grasped this basic principle very well. They brought together their talents, intelligence, and organisational skills to create an association to promote contemporary music - the music of their generation.

It was two years ago that composers Peter Groll, Boško Milakovič, Lucia Koňakovská, Lucia Papanetzová, and Marián Lejava put the association of young composers, musicians, and admirers of contemporary music together. They named it Soozvuk, which, when pronounced, means co-sounding in Slovak. The first four letters of the title symbolise the birth year of the association - 2002.

"We belong to the same generation and we graduated from the Music Academy more or less at the same time. We saw that the situation for young composers in Slovakia was not as satisfying as we wished. The best we could hope for were three concerts per year for all of us. We decided to found Soozvuk to be able to organise concerts and to create more space for our activities," Lejava said about the association's tasks.

"Another reason was to keep young composers, musicians, and the admirers of contemporary music of our generation together, and to unite their efforts. Also, we would like to help those who just finished their music studies make an easy transition from the academy to active musical life."

Having almost no material basis or fixed premises, the association has initiated 30 different events in two years: discussions, meetings, and concerts. The five members of the association established close collaboration with such institutions as the Music Fund, Slovak Radio, and the Buryzone and V-club cultural venues. Their compositions were performed during the concerts they organised themselves and within the programmes of the international music festivals in Slovakia. Slovak Radio broadcast their music.

The association does not only promote the works of its members. "Our doors are opened for everybody who is ready to contribute to our activities," said Lejava.

Marián Varga, Peter Zagar, Jevgenij Irsai, Oskar Rózsa, Ilja Zeljenka, and Juraj Kojš are some of the Slovak composers who have participated in events organised by Soozvuk.

Asked if it is easy to find musicians to perform contemporary music, Lejava answered: "It is not at all easy because the whole system of musical education is based on classical tradition. In spite of that, we have formed a group of 10 musicians who are happy to collaborate with us. There is the Zwiebel String Quartet, pianists Andrea Mudroňová and Lenka Bajuszová, accordionist Marika Kormanová, flutist Monika Streitová-Popelářová, conductor Zuzana Znavová, and pianist and composer Ivan Buffa."

Each member of Soozvuk carries his own unique personality. Looking at them, one wonders how they could possibly work together. Lucia Papanetzová is very discreet and gentle. Marián Lejava charms with his openness and humour. Boško Milakovič is slow and serious. Lucia Koňakovská combines modesty, clarity, and determination. The gloomy and introverted looks of Peter Groll hide a childlike soul.

"The main principles of our activities are communication and confrontation," expla-ined Groll. "Communication is possible because we have similar goals. And confrontation naturally arises from different styles and approaches to composition among the members of our group. How do we arrive at a common understanding?

We discuss, compromise, produce new ideas, and realise them. For all of us it is a great school of life and creation!"

And indeed, stylistic differences in the creations of these young composers are striking. Looking for symbolic meanings, Papanetzová writes very rational, constructive, and cool music. Lejava plays with minimalism and sonorities. Milakovič experiments with acoustic and electronic soundings. Koňakovská builds her compositions on the development of small thematic patterns, and Groll continues in the best traditions of 20th century music. The new member of the group, Armenian Karin Sarkisjan, refreshes her style with oriental motifs.

Together they embrace all possible genres by writing chamber, symphonic, choir, and vocal music; working for drama and ballet theatres, movies and the pop industry; and conducting and playing different instruments.

"Our power is in unity," said Milakovič.

"If I were alone, to reach my goals I would need to be a manager, an agent, a politician, and a composer. Being together we can share all these functions and, in addition, get more time to create music," he said.

"As a group we can more easily face difficulties like the commercialisation of art, the centralisation of Slovak cultural life, and the insufficiency of musical education," added Koňakovská.

The above tasks challenge the young composers of Soozvuk to proclaim their artistic credo and to make sure it is heard by all of society.

For more information about Soozvuk visit www.soozvuk.szm.sk. The group holds a concert on June 23 at 19:00 at the building of the Slovak Radio.