"HALT! Your soul belongs to God and your money belongs to me!" That's how Juraj Jánošík (1688 - 1713) used to stop carriages filled with nobles travelling around the Malá Fatra Mountains, or so the legend goes. 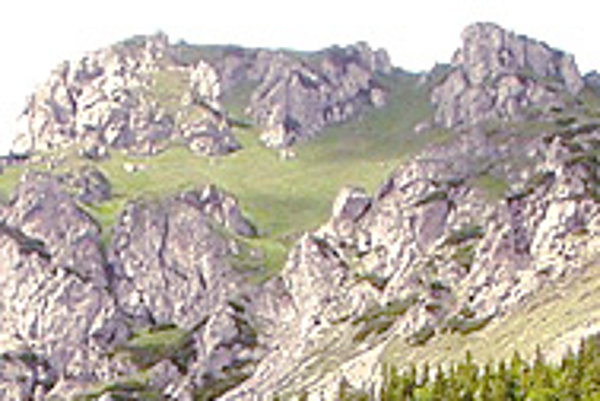 "HALT! Your soul belongs to God and your money belongs to me!" That's how Juraj Jánošík (1688 - 1713) used to stop carriages filled with nobles travelling around the Malá Fatra Mountains, or so the legend goes. The poor considered him a hero - a Slovak Robin Hood - but nobles viewed him as nothing more than a bandit.

Jánošík operated out of the steep mountains that surround the Vrátna valley. Today, you can hike many of the same trails that he and his compatriots once used to hide from the authorities. Eventually, the nobility caught up with Jánošík and sentenced him to death, but his legend lives on in nearby Terchová, his birthplace and the site of a statue dedicated to his memory.

In this article, we will follow Jánošík's tracks through the Horné Diery (Upper Holes) gorges. We will climb high ladders, cross torrential creeks, and scale the jagged peaks of Veľký Rozsutec. What is more, we will cover all this in a single afternoon. We will also describe a demanding hike that follows the eastern part of the ridge from Poludňový Grúň (1,470 metres) over Mount Chleb (1,647 metres) to Snilovské Sedlo (1,520 metres) and back down to Vrátna dolina valley.

Vratná is two hours by car and three hours by express train and local bus from the capital. After leaving my luggage at the hotel Boboty, right in the Vrátna valley, I began my first day by exploring the nature trail that begins in front of the hotel. The trail goes through a forest, and then continues through meadows to Podždiar, where you can see an old shepherd's hut from the period of Wallachian colonisation of the 14th - 16th centuries. The Wallachians were itinerant shepherds from Romania who, over the course of 200 years, gradually colonised the entire Carpathian arc. These independent shepherds served local lords as border guards but, up until the Thirty Years War (1618-1648), were not regular subjects. They ruled themselves according to their own law, the Wallachian Law, and elected their own leaders, known as vojvodas. They also cut down large swaths of the Carpathian forest, and that's why, even today, the Vrátna tree line is 400 metres lower than it used to be.

The trail continued through one of the most attractive parts of the valley - the gorges between Veľký and Malý Rozsutec. Created by the Dierový potok (Hole Creek), these gorges and their nine waterfalls are accessible via a series of ladders and footbridges. The entire ascent got my adrenaline pumping because heavy rains had flooded the creek, causing water from the falls to cascade over parts of the ladders. Waterproof hiking boots are essential.

After less than one hour, I reached Medzirozsutce (1,200 metres). From here a trail leads straight to Veľký Rozsutec (1,609 metres). This ascent takes about one hour. However, the trail gets quite steep here so I decided to take a less demanding detour through the woods, skirting the entire massif. In another hour I was in the Medziholie gap (1,185 metres) on the main ridge between Rozsutec and Stoh (1,607 metres). Many hikers use this gap to take a break, but since it was windy, I pressed on - down to the valley and through the woods to the village of Štefanová (650 metres), where there are several restaurants.

The morning of the second day welcomed me with a marvellous sight: beautiful little white clouds rolling through the surrounding meadows and the sun shining above. Some say Vrátna is the most beautiful valley in Slovakia, and today it lived up to its reputation.

After breakfast I took a quad chair from the valley up to Grúň mountain (1,000 metres). The chair covers an impressive 400 metres of uphill vertical - a blessing for time-pressed day hikers. At the top, I found a small chalet and sheep grazing on the high meadows. A late-night storm had left the steep trail to Poludňový grúň slippery and muddy. Collapsible aluminium hiking poles would have made this ascent much easier.

After a one-hour climb, I reached the peak. It is rumoured that Jánošík used to communicate with his fellow bandits by whistling from mountains like this one. The rocky trail continued further above the tree line along the ridge. We climbed 100 metres and then descended 100 metres, only to climb 100 metres all over again. "This is not fair," complained my friend Miro. To the south, the slopes descend to the Váh river valley; and to the north they fall into the Vrátna valley.

As the day progressed, the sky became cloudier, but I continued to march to the top of Chleb (1,647 metres). Last year, the ski resort decommissioned the 40-year-old chairlift that ascended to Chleb from Vrátna dolina, but a new chair is on order and should be installed in the near future. "I have skied all over the Alps and North America," exclaimed my co-author, "and I've never experienced a chairlift like the old Chleb chair." The chair moved up the mountain sideways on the cable rather than facing forward, giving skiers and hikers a unique perspective on the mountain.

From Snilovské sedlo, the trail leads to the highest point of the national park, Veľký Kriváň (1,709 metres). The round trip up and back takes 1.5 hours. More experienced hikers can continue further on the ridge to Malý Kriváň (1,671 metres), Suchý vrch (1,468 metres), and the chalet on Kľačianska Magura, where one can spend the night, or head down to the village of Turčianske Kľačany (410 metres). After a short break, I started my descent back to the valley by the towers of the old chair lift. The 750-metre vertical drop was strenuous, and my legs got quite a workout.

I did not run into Jánošík, but I did run into a few people from Košice and Bratislava, who, as the receptionist in hotel Boboty said, "usually come here for the long weekends to rest, check out the ladders in the Diery gorges, or, on occasion, take a chairlift up to the ridge." Many lovers of folklore will come here during the first August weekend for the Jánošík Days festival (see page 13).

Accommodation in family pensions can be found mainly in Terchová, about four kilometres from the valley.