NOTHING today evokes the 1968 Soviet invasion of Czechoslovakia and the famous confrontation that took place at one of Bratislava's busiest crossroads, near the Commenius University, save a small commemorative plaque on the school's exterior. It marks the place where the Soviet occupiers killed a 17-year-old girl. 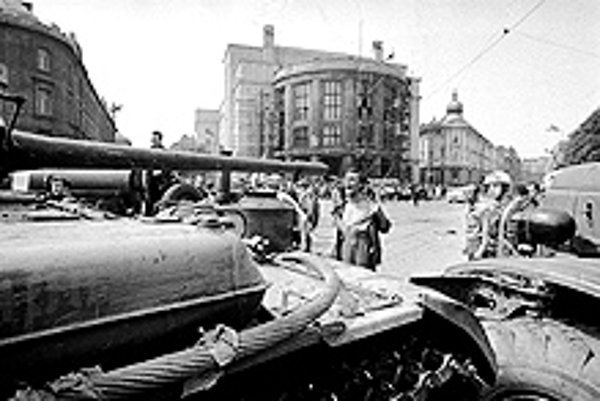 Font size:A-|A+  Comments disabled
NOTHING today evokes the 1968 Soviet invasion of Czechoslovakia and the famous confrontation that took place at one of Bratislava's busiest crossroads, near the Commenius University, save a small commemorative plaque on the school's exterior. It marks the place where the Soviet occupiers killed a 17-year-old girl.

At that time, dozens of tanks ringed the streets and aimed at the crowds of protestors. There was shooting heard, cries. People could not believe that the invaders were Russians - the Russians who had liberated them in 1945. That day, August 21, 1968, crushed all hopes for democratic change under the authoritarian communist regime. The Prague Spring was definitely over.

Ladislav Bielik, a photojournalist with the Smena daily at the time, was there to capture it all. His photograph of a man baring his chest to a tank gun reached the West and soon became emblematic. It was published in many media, won prizes at international competitions, and ranked among the century's 100 greatest photographs. But all this was done without mention of the author, under a false name, and often with an incorrect caption underneath the picture.

"Father died in 1984. We are very proud that he managed to raise such awareness. But what we have to do is correct the information that was published with the picture," said Peter Bielik, the younger of the photographer's two sons.

Bielik produced around 300 pictures documenting the events of those days. The Man with Bared Chest in Front of the Occupying Tank is the most famous, followed by Gunman, a set of four pictures capturing a Soviet soldier aiming his pistol at the crowds and shouting. Then there is Statues, a series of emotional photos of people carrying poet Dominik Tatarka above the crowd on their hands (see top of this page). Other photos capture tanks burning, being pelted with stones, and decorated with flowers and Czechoslovak flags.

When Bielik died, killed by a car while taking pictures of a rally in Budapest, the family did not know anything about the pictures. Even a police search ended in vain. In 1989, after the fall of the communism, the photographer's good friend Pavel Meluš persuaded the family to look for them so they could bring their terrible testimony to light through exhibitions.

"I started to search in an old suitcase, which I once had in a pioneer camp and which was half-mouldy from being hidden down in the basement," Peter recalls. "Among the negatives an older, yellowish photo file clearly stuck out. It was full of tanks. We brought it to a studio. There were all the photographs we were searching for, including the main photo."

In 1998, the family discovered that the photograph was being distributed illegally under a false copyright. One reason was that the agencies distributed only the central part of the original, not the whole picture. The fight for the acknowledgement of the real photographer began.

The number of papers and books around the world that have printed the picture with false or no credit and without permit is vast. The Slovak Spectator is no exception. Many corrected the credit as well as the misleading caption stating that the photograph was taken in Prague, at least online. But some Slovak papers, such as Nový Čas and Národná Obroda, still continue to publish it illegally.

"Every year we send an announcement to the [Slovak] media saying that if you want to publish Bielik's photos contact us. Not even one replies, and then they publish it illegally. There's no respect, it's nonsense to deal with them," Peter said.

Reporting on the issue revealed that the photograph was taken to the West after Smena published it the day after the invasion. A German student, Peter Stephan Lutz, told the Capa agency that he took it to the Deutsche Press Agency (DPA), where it has since been distributed under his rights. Interestingly, Lutz never met Peter's father. He claimed that somebody gave him a file of negatives on the street, which he then brought to DPA. In 2000 the agency recognised the mischief and offered the Bielik family compensation.

"It was such a tiny and small recompense that we decided to appeal to a court," the family said. "Next week we should learn the results."

Bielik's photograph won him the 1968 - 1969 World Press Photo award. Quido Knopp, a documentary journalist from the German Zweites Deutsches Fernsehen public television broadcaster, was the first to rank the photograph of the man facing the tank gun among the 100 Pictures that Made History in 1993. Following the TV report, the Slovak daily Národná Obroda started a search for the man in the photograph. The man, Emil Gallo, it turned out, committed suicide in 1970 for family reasons.

In 1998, Marie-Monique Robin from the French agency Capa ranked Bielik's photograph among The Photos of the Century: 100 Historic Moments. The American Life magazine included the photograph in its book 100 Photographs that Changed the World but credited it to Stern, a German newspaper.

Even though Bielik was never credited for the picture during his life, the authorities in his country knew who took them. After moving to Štart magazine he was gradually forced out through various banal accusations obscuring the real truth.

The events of August 21, 1968 came only a few days after Bielik married Alica, a reporter with Smena. When the Soviet-led armies entered the town he came to her and told her: "Look, the whole Warsaw Pact has come to congratulate us."

"Of course, he hated what was happening, taking it as a terrible injustice," his son said, adding that it is interesting that he never talked about the pictures to anybody and never destroyed them, despite his wife begging him to do so.

"Now is a good time to understand what was happening at that time. Though today [our relationship with the region's superpower] has economic rather than social aspects, as it was back then, just imagine if the Americans, whom we trust so much, attacked us. It would have the exact same effect. Nobody expected tanks; people were collapsing on the street, unable to understand what was going on. Development was halted - and it turned us back for many years. On the other hand, it's a strong message and lesson for the future."

It is early morning in August.
I wake up suddenly, my neighbour is shouting something
Is it a reality or a nightmare?
It is 21 August 1968

Later I walk up Štúrova Street, it is 7:00
tanks are queueing in the middle of the street,
people are queueing for food.

30 minutes later I'm in front of the Radio building.
Another tank with it's trunk pointing right at the main entrance.
After having a short meeting with our boss,
we have to abandon the building.

Railway stations, roads, borders -
emigration.
In several weeks' time my family is smaller,
the number of my friends is reducing
Days and nights of long debates,
hot discussions,
tears and fury.