EVEN THOUGH non-governmental organisations were satisfied with the current law on associations, dating from the beginning of the 1990s, the Interior Ministry has prepared a new bill on associations that hardly anybody is happy with. 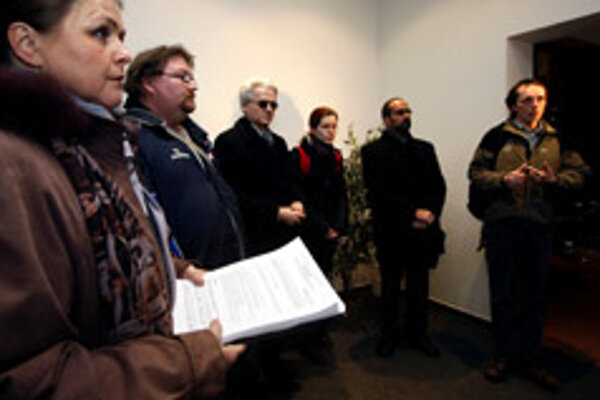 EVEN THOUGH non-governmental organisations were satisfied with the current law on associations, dating from the beginning of the 1990s, the Interior Ministry has prepared a new bill on associations that hardly anybody is happy with.

According to representatives of NGOs and experts in the field, the proposed bill is a step back from democratic principles that violates the constitution.

But the Interior Ministry says the law must change to meet European Union requirements.

"Instead of a slightly over-sensitive reaction, we would expect constructive proposals on how to improve this law from the NGOs," ministry spokesman Erik Tomáš told Slovak Television on January 3.

Under the proposed bill, citizens can only associate in clubs where they pursue activities that are mutually beneficial.

"They cannot engage in any activity that is useful for the outside world or towards the public - which, however, most organisations do," said lawyer Eva Kováčevichová, who works for the Via Iuris NGO. "Associations that pursue only mutually beneficial activities are bee-keepers, or philatelists, or so on."

Under the new bill, if a group of parents decids to form an association to build a playground for their children, that would be an illegal activity, she said.

"The equipment would not be built for themselves, but rather for their children. So the associations could not do that, as they can only perform activities that are useful for their members," she said.

"This again contradicts constitutional law, which provides that associations have the freedom to choose whether they will collect membership subscriptions or not," she said.

The current bill only sets out how to implement the freedom of association, said Šarlota Pufflerová, from the Citizen and Democracy civic association.

"(The proposal) introduces many terrible limitations," she said. "It is very complicated. And for some Slovak NGOs it may even be fatal."

The new bill deals with re-registering existing associations, but it shows signs of a licensing process, which also goes against the constitution, she said.

"The constitution says that the freedom to associate is not based on anything," Kováčevichová said. "It is only limited for reasons that would be at odds with civic rights, the protection of public order, and so on."

The bill also says that associations that get money from the two-percent assigned tax must submit to an audit. And it forces associations to file annual financial reports to the ministry.

"Imagine the ministry gets about 20,000 annual reports - as this is approximately the number of civic associations," Pufflerová said. "Who will read and check them at the ministry?"

There is already some control over public resources for NGOs, according to Kováčevichová. As soon as an NGO gets money from the public budget, such as the two-percent tax, the Levy Office can check its numbers at any time.

The ministry's report on associations says the new act was created because there is chaos in the non-profit sector.

Representatives of the non-profit sector argue that the law should deal with the considerable financial resources received by foundations, not associations or clubs. Foundations are governed by the Act on Foundations of 2002.

Kováčevichová said she suspects the Interior Ministry prepared the bill in an attempt to get the whole sector under its control.

"It is definitely an interference in democratic freedoms, as the bill goes far beyond the limitations set by the constitution," she told The Slovak Spectator.

Radoslav Procházka, an expert on constitutional law, said the bill violates the Slovak Constitution, and the Convention on Human Rights and Fundamental Freedoms, because it greatly limits the right to association.

"This law is a regression to the time before 1989, when we succeeded to push through the freedom of association," said Marcel Zajac from the Ekopolis NGO, a member of the

Tomáš told the television news channel TA3 that the proposal was designed to make the non-profit system more transparent. The current system is flawed because NGOs are not required to document their activities.

"Most of these NGOs are dysfunctional," he said on January 4.

Kováčevichová said that is complete nonsense.

Pufflerová suspected there was another reason for the law.

"The NGOs that monitor and publish the unfair behaviour of politicians and public bodies interfere with their interests, and this is a way for public administration representatives how to move them out the way," she told The Slovak Spectator.

In early January, more than 430 NGOs formed the Civic Initiative for the Freedom of Association. They threatened that if the bill was not withdrawn from the legislative process, they would start a "massive campaign". They also submitted a petition supported by about 4,000 citizens.

"It is crucial for us to learn the real reasons that led not only the Interior Ministry, but also other ministries to the verge of changing the current legislation," Marcel Zajac from the Ekopolis NGO and a member of the Council for Non-governmental Organisations, told the Sme daily on January 8. Instead, the ministries must "create a piece of legislation, either with amendments or a completely new law, that will preferably satisfy all those who want to associate in Slovakia".

After the cabinet council negotiations in January, Tomáš said the bill could not be withdrawn from the legislation process.

"But it will not be handed in for cabinet negotiations before an agreement is reached with the NGOs," the told the TA3 TV channel.

Interior Minister Robert Kaliňák promised to meet with NGO representatives to discuss the bill in early January. But so far, neither he nor any other ministry official has done that.

The Interior Ministry has not responded to requests for comment from The Slovak Spectator.

Martin Bútora, the honorary president of the Institute for Public Affairs think-tank and former Slovak Ambassador to the US, said the Interior Ministry created the bill without consulting NGOs.

"It almost seems as if they wrote it as some kind of a trick," Bútora said for The Slovak Spectator.

He sees a whole series of grave faults and problems, the most serious being that the bill undermines, or even destroys, the relationship between governmental institutions and NGOs.

"This partnership is natural in every modern European country, in every member state of the European Union," he said. "In Slovakia, it was severely damaged during Mečiarism," the reign of Vladimír Mečiar as prime minister from 1994 - 1998.

The partnership has been rebuilt since Mikuláš Dzurinda's government took power in 1998, he said.

"There has never been such a series of threats like this ruling coalition has made," he said. "First, it was the attempt to end the two-percent tax, which helps the NGOs to survive, and the second attempt is this current bill."