THE WORLD of sports is preparing for the Summer Olympics, and Slovakia is no exception. 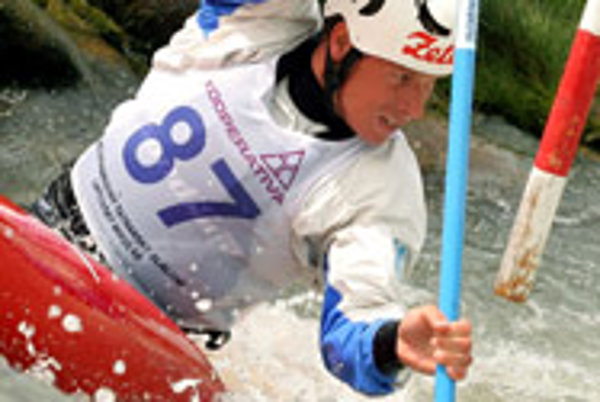 Martikán is another of Slovakia's irons in the Olympic fire. (Source: ČTK)
Font size:A-|A+

THE WORLD of sports is preparing for the Summer Olympics, and Slovakia is no exception.

Twenty-seven Slovak athletes have already qualified for the games, which have thrilled athletes and spectators since the times of ancient Greece. The Slovak Olympic Committee (SOC) estimates that more than 50 Slovak athletes will compete at this year's Summer Games, which start in Beijing, China on August 8.

Hopes are high, with the SOC predicting that Slovak athletes can win six medals and 14 diploma positions (up to 8th place) in total.

"That number of medals would match Slovakia's performance at the 2004 Games in Athens and the 14 diploma positions would be the best result the country has achieved at one Olympics," Ľubomír Souček from the Slovak Olympic Committee told The Slovak Spectator.

Part of the SOC's preparation for each Olympics is to appoint a committee to gather all the information the teams will need, Souček told the Spectator.

"Here the athletes can get all the detailed information which will be important in Beijing, Souček said, "such as information relating to accommodation, food, health care and so on."

The SOC takes care of everything linked to Slovakia's participation in the Games, from arranging flights and securing the official clothing of the Slovak teams to finalising accommodation in the Olympic village, said Souček. The committee also serves as a liaison between the organisational committee of the Olympics and Slovak state bodies, and will be responsible for arranging the ceremonial swearing-in of the Slovak athletes by President Ivan Gašparovič, who, along with Education Minister Ján Mikolaj, is planning to be in Beijing.

The Summer Olympics in Beijing will be the fourth summer Games which Slovakia will attend as an independent country since the split of the Czech-Slovak Republic in 1993. The qualification process is not yet complete, and thus the list of Slovak athletes travelling to Beijing is still open.

"So far, 27 Slovak athletes have tickets to the Games," said Souček. "Of these, seven athletes will compete in flatwater canoeing, five in water slalom, seven in shooting, four in athletics, three in road cycling and one in sailing."

These numbers confirm the strong position of Slovakia in water sports. Many prior Slovak Olympic medallists have already secured tickets to this year's Games.

Among the five water slalom canoeists competing this year are Michal Martikán, who won the first gold Olympic medal for Slovakia in Atlanta in 1996, and brothers Peter and Pavol Hochschorner.

Marián Ostrčil, competing in the category of the individual Canadian canoe (C-1), came in second at the 2007 World Championship in the 1,000-metre race.

"We hope that Martina Moravcová, who suffered from major health problems in 2007, will recuperate this year and confirm that she remains among the top world-class swimmers," said Souček. Moravcová holds two silver Olympic medals and many medals from World and European championships. If she competes, this will be her fifth Olympics.

In the category of athletics, hammer thrower Libor Charfreitag, who won bronze the World Championships in Athletics last year, might be the country's best hope for a medal. Shot putter Mikuláš Konopka, who finished first at the European Indoor Championship in 2007, is another of Slovakia's irons in the fire.

Slovakia also excels in tennis, said Souček. "In particular, Daniela Hantuchová is expected to launch an attack on medals in Beijing." Hantuchová recently reached a milestone when she advanced to the semi-finals of the Australian Open grand slam tournament, placing her among the four best players. As she is now ranked number 8 worldwide, it is possible to expect that her achievements at the Games will be high. Another top Slovak tennis player, Dominik Hrbatý, underwent elbow surgery last year. The SOC is now requesting a wild card for him, which is awarded to top athletes who, due to health problems or injuries, cannot participate in Olympic qualification trials.

The team of sportsmen and women competing in athletic disciplines might be as large as 16 people. "This means that 12 places are still open," said Souček.

"In swimming, we estimate that three may qualify for the Games. In tennis, it might be four and one in weightlifting. There is also a chance that Slovakia will qualify in judo, wrestling, table tennis, and gymnastics, but it is very difficult to estimate the number of athletes who will qualify.

"Basically, the Slovak contingent should have about 50 to 55 athletes, or possibly even 57," Souček told The Slovak Spectator. "This is the estimate according to the current situation."

The qualification process will be completed in late May or early June, and the final lists of Slovak athletes nominated for the Games will be compiled in late July. According to the SOC's current plan, Slovak President Ivan Gašparovič will swear the athletes in on July 24.

Slovakia improves at each Summer Olympics

Slovakia has participated in seven Olympic Games since it become independent in 1993. It is traditionally more successful at the Summer Olympic Games, winning medals at all three summer Games, and improving on its record each time.

During the following Games, in Sydney in 2000, Slovakia won five medals. The Hochschorner twins were golden in the water slalom and Moravcová claimed two silvers. Martikán returned to win silver, and another water slalomist, Juraj Minčík, claimed bronze. "In Sydney there was a unique situation in the C-1 category (single canoe), when Martikán came in second and Minčík third," said Souček. "This was the first time in history that two Slovaks stood shoulder to shoulder on the victory podium in an individual discipline."

"They were the first in Slovak history to win gold in two consecutive Olympics," said Souček.

Slovakia has been much less successful in the winter Olympics. From four winter Games, it has brought home only one medal: Radoslav Židek won silver in snowboard cross in Torino in 2006.

But even though Slovakia has only one winter Olympics medal, its overall performance has been quite sound.

Slovak biatheletes have also performed well. Martina Jašicová was sixth in Lillehammer, Soňa Mihoková was fourth in Nagano in 1998, and the Slovak biathlon relay team came in fourth as well. In Salt Lake City in 2002 the relay team again excelled, coming in in fifth position. Marek Matiaško also placed fifth in Torino. "Thus we can say that biatheletes have achieved the best performance at winter games," Souček told The Slovak Spectator.

Slovakia fares very well in water sports, and Souček attributes the successes in water slalom to excellent training conditions. "We can say that Slovakia offers the best conditions for preparation," Souček told The Slovak Spectator. "The state invested a lot into water slalom when it opened a new centre in Čunovo, which is a world-class slalom and rafting area." There is also another, older area, in Liptovský Mikuláš. "This is the only sport in Slovakia in which athletes have two centres with excellent conditions for training," said Souček.

The situation is less optimal for flatwater canoeists. "Conditions for training in flatwater canoeing in Slovakia are not comparable with water slalom," said Souček. "For example, the men's team in K4, who are from Komárno, return regularly with medals from world and European championships. But these boys do not have any proper track to train on. In fact, they train on a winding river, which does not even allow them to mark out the track. In spite of this, they are absolutely elite."

In shooting, training conditions are similarly under par.

"In general, one can say that the results of Slovak athletes at the Olympics are significa