Slovak-Canadian ties will get new incentives

THE LINKS between Canada and Slovakia have been growing closer in recent years, with joint programmes in development, education and youth opportunities. Slovaks do need visas to travel to Canada, though, but that could change in the near future, says John Broadbent, Canada's charge d'affaires for Slovakia. Slovakia could also be a promising country for investment for Canadian companies, especially those in Canada's large auto sector, Broadbent told The Slovak Spectator in an interview. 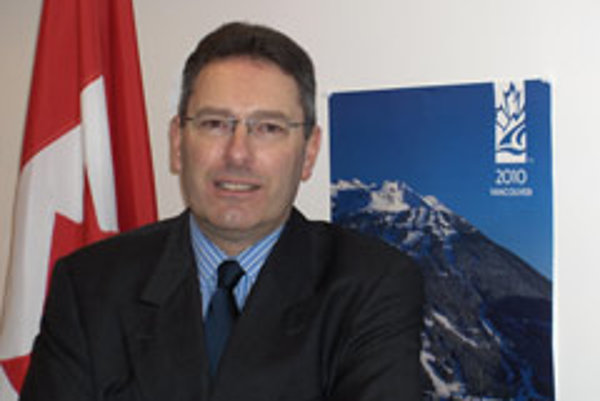 Charge d'affaires of the Canadian Embassy John Broadbent. (Source: Courtesy of the Office of the Embassy of Canada)
Font size:A-|A+

THE LINKS between Canada and Slovakia have been growing closer in recent years, with joint programmes in development, education and youth opportunities. Slovaks do need visas to travel to Canada, though, but that could change in the near future, says John Broadbent, Canada's charge d'affaires for Slovakia. Slovakia could also be a promising country for investment for Canadian companies, especially those in Canada's large auto sector, Broadbent told The Slovak Spectator in an interview.

The Slovak Spectator (TSS): The unemployment rate for young people is much higher in several countries of the European Union than it is in Canada or Japan. Experts suggest that one of the reasons might be the weakness of the education systems of these countries. Slovakia's education system has been criticised for its lack of bridges to the real needs of business and society in general. Is education a key issue in your homeland? What are, in your opinion, the most urgent issues in the Slovak education system? What are Canada's experiences that Slovakia can use?

John Broadbent (JB): Several decades ago, Canadian governments understood the need to coordinate education with the requirements of a modern economy. Education is a provincial responsibility in Canada, and several provinces started to work with their industries to identify training needs. In the 1960s, Ontario established a network of colleges with links to regional businesses. Alberta did the same for the oil and gas industry, with two superb institutions in Calgary and Edmonton. Québec has also succeeded in targeting training in the aerospace sector.

We have tried to develop industrial "clusters" in Canada, which includes building training centres to service those specific sectors. Slovakia could do the same in the auto sector in western Slovakia - you have the industry already, but now you need the training facilities to ensure a constant flow of qualified employees at all levels. Young people in the region then stay, knowing they will have well-paid jobs, and whole communities start to identify themselves over several generations with a particular industry. It can be very healthy for a community to have this identification in an industrial cluster.

TSS: The Canadian Studies Program, according to the website of your embassy, offers support to academics outside Canada for teaching, research and publication about Canada in various disciplines. Could you tell our readers more about this programme? Has Slovakia been actively involved in this programme?

JB: The objective of the Canadian Studies Program is to develop a greater knowledge and understanding of Canada, its values and its culture among scholars and other influential groups abroad. The scope varies greatly from one institution to the next. Courses deal with questions involving Canada's bilateral and multilateral relations and such subjects as: English and French-Canadian literature; culture and the arts; history; social and political sciences; geography; business studies; the Canadian political system; the economy; status of women; aboriginal issues; multiculturalism; social values; the environment; law; media; and even regional development. There are more than 24 national and multinational Canadian Studies associations around the world.

JB: Yes, but only in a limited and indirect way. However, we hope this will change significantly later this year. In 2007, the governments of Canada and the Slovak Republic negotiated an Agreement on Youth Mobility. Once signed and ratified, young Slovaks and Canadians between the ages of 18 and 35 will have new opportunities to study, to engage in short-term employment in support of their career development, to complete internships and to participate in working holidays in each of our countries. The agreement will simplify the administrative procedures to make it easier to gain international experience, enhance professional study, increase employability in the job market and better adapt to today's knowledge-based societies and globalised world.

TSS: Slovakia has entered the Schengen zone. Will the fact that Slovakia is now part of the EU's Schengen security system increase the likelihood of Slovaks travelling to Canada without visas? The visa waiver programme with the United States has been one of the most intensively covered issues in the Slovak media. Is the visa issue, in your opinion, as dominant in Slovak-Canadian relations as well?

JB: Slovakia's entry into Schengen is one of the factors that Canada takes into consideration. The requirements that the EU made on new member states to accede to Schengen involve critical issues such as document security, passenger screening, etc. Canada has other criteria as well. Until the visa on Slovakia has been lifted, it will be a major issue in our relations, but it is by no means the dominant element.

JB: Each country is reviewed individually. Visa policy decisions are based on an objective country-by-country assessment of a number of criteria such as socio-economic profile, immigration issues, travel documents, safety and security issues, border management, human rights, and bilateral relations. Citizenship and Immigration Canada (CIC) consults extensively with other departments to ensure that a broad range of perspectives is considered when reviewing countries and in deciding if a change to the visa requirement of a country is recommended.

TSS: How is Slovakia doing in terms of meeting the Canadian criteria for visa cancellation?

JB: The technical visit by Canadian officials in late November last year compiled a great deal of information that CIC is reviewing. A recommendation will be made to the minister in the spring. I can say that Canadian officials were very impressed with what they saw during their visit.

JB: The ODACE programme has ended but it was a great success, both in helping Slovakia build its own ODA agency, named SlovakAid, but also in co-financing over 30 projects in other countries. Our two countries completed aid projects in Africa, the Balkans, Central Asia and even four in Afghanistan. The projects were identified by Slovaks, financed equally by the two sides, and implemented by Slovaks. It was a model for this sort of cooperation, and was by far the most successful of all the countries in the region.

JB: Yes, Slovakia is certainly an attractive destination for Canadian investors. I was in Canada only two weeks ago and met with several Canadian firms who are seriously studying, in detail, the option of establishing here. The key sector is obviously the auto industry, where Canada has a large number of parts manufacturers with the experience of working with high-tech processes and in a highly competitive environment. They are looking at installing operations here to service the regional market.

As for incentives, taxes are important but qualified and hard-working employees are the single most important element in their decision. The fact that qualified labour is increasingly difficult to find in western Slovakia could be a problem.

In the other direction, Canada is open to investment from Slovakia in any sector at all. We encourage foreign investment in both directions and would like to see more Slovak interest in Canada.

TSS: What are Slovakia's competitive advantages compared to countries farther east or the Balkans, which now offer even cheaper labour and also tax incentives?

JB: Cheap labour and low taxes are not the only considerations for investors. They also need good infrastructure to be sure that their products will be delivered safely and quickly. Transparent and consistent application of rules and regulations is also a big consideration. Investors need to be sure that there will be no surprises when their tax bill is calculated, for example. Finally, I think that the strong work ethic in Slovakia is very important.

JB: Yes it does. There are certain sectors of the Canadian economy where there is a chronic shortage of particular skills, for example the construction industry. Also, we have a big challenge in moving workers from areas of high unemployment to regions where workers are needed, such as northern Alberta. Keep in mind the size of Canada and you will understand the problem of labour mobility.

TSS: Is there a large Canadian community in Slovakia? How is it structured? Are they mostly Canadian expatriates or rather managers working for international corporations?

JB: There are relatively few Canadians living in Slovakia and many of these are Slovak-Canadians who have returned here to work or retire. Some of our community, whether of Slovak origin or not, are working for international companies in construction, real estate, legal firms, telecommunications, and the auto sector, and there are a few famous journalists, but the number is very small. We even have trouble assembling a group to watch the World Hockey Championships each year, and find ourselves massively outnumbered by Slovaks in a sports bar!

JB: The Slovak community in Canada is the third largest in the world and they are highly regarded. There have been several prominent business leaders and some academics who have made their mark in Canada. Also, and this is important when talking about investment, Slovaks in Canada have built a reputation as excellent employees at all levels in an industry, to the point that this enhances very directly the image of Slovakia as a place to invest.