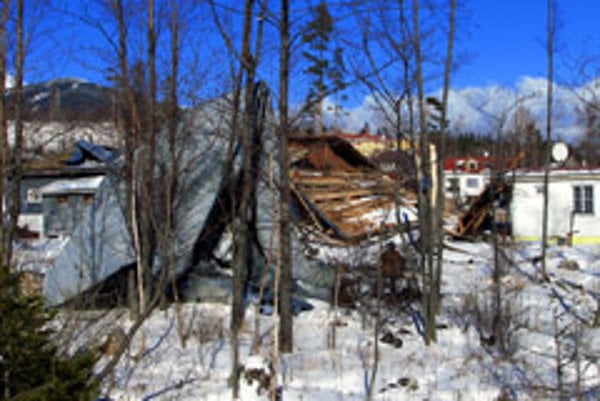 Wind tore off the roof of this cottage in Tatranská Lomnica. (Source: SITA)
Font size:A-|A+

The High Tatras region suffered the worst damage again, the Pravda daily wrote. Here the storm peaked overnight from Sunday to Monday with wind gusts reaching 80 to 108 kilometres per hour. At the Chopok peak in the Low Tatras, the gusts went up to 166 km/h. In total, more than 9,000 trees fell on state land in the High Tatras region.

"This was a scattered calamity, as no property was hit completely," the director of the TANAP state forest company, Peter Liška, told the daily.

"This is not an exceptional situation," Liška said. "This land was hit by a windstorm three years ago, and moreover, the trees are damaged by the bark beetle."

About 200 fallen trees blocked the road between Svit and Batizovce.

"The trees also fell on four cars," said Jozef Michlík from the firefighters headquarters in Poprad. "Fortunately, the trees only damaged cars' bodies and nobody was injured."

After the stormy weekend, Tatras' Electrical Railways (TEŽ) did not resume operation until Monday, January 29. Martina Pavlíková from TEŽ told Pravda that the railway between Štrba and Štrbské Pleso is still out of order due to fallen trees and damaged electrical wires.

More than 350 trees fell on roads in the Prešov Region. The windstorm ripped off some roofs and caused some car accidents. Between Hozelec and Hôrka, near Poprad, it blew some cars from the roads into ditches.

In Bratislava, the storm did not cause anything more serious than a few fallen trees, billboards and streetlamps. But police closed Grösslingová, Panská and Mostná Streets after the wind started blowing down roof tiles.

The bad weather did cut off power to some households in the capital.

"Up to 2,000 clients from the entire Bratislava Region reported problems with electricity," Ján Orlovský, spokesperson of the regional power distributor ZSE, told the daily.

The total damages caused by the windstorm across Slovakia have not been calculated yet. Liška estimates the damages in the state forests at Sk300,000.