Leaving the east behind

IRENA Ščuroková and her husband Fedor have always crossed the Slovak-Ukrainian border once or twice a month to buy cheap cigarettes and alcohol, as well as candy for their grandchildren. They live in the small Slovak village of Ubľa, and used to walk to Velkyj Bereznyj in Ukraine. 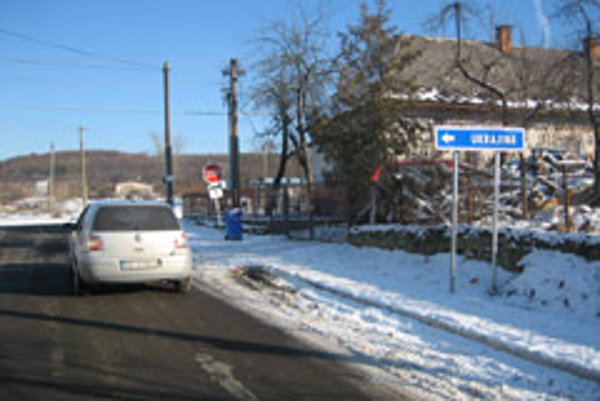 IRENA Ščuroková and her husband Fedor have always crossed the Slovak-Ukrainian border once or twice a month to buy cheap cigarettes and alcohol, as well as candy for their grandchildren. They live in the small Slovak village of Ubľa, and used to walk to Velkyj Bereznyj in Ukraine.

But since their last trip, two significant changes have occurred: Slovakia, unlike Ukraine, joined the Schengen zone on December 21 and revised its Customs Law as of January 1. From now on, all goods taken across the border are electronically recorded, which makes both smuggling and legal transportation much more complicated.

On a recent Friday morning, it was -10 degrees, which kept the checkpoint in Ubľa from overcrowding. Ščuroková and her husband showed their passports to the customs officers and filled in a form about the purpose of their trip into Ukraine. They then received an information sheet stating the new customs limits.

"We are shocked," Ščuroková told The Slovak Spectator, speaking in the Rusyn dialect of northeastern Slovakia. "We have been walking for an hour and only now they tell us that we can buy just two packs of cigarettes."

In fact, as of January 1, 2008 anyone living within 15 kilometres of the Slovak-Ukrainian border can take only one packet of cigarettes per person a day across the border.

Those who live farther inland can buy a whole carton, 10 packets, just as they did before, but that's the new monthly limit for everyone.

"Do they think we can fly?" Renáta Vitková, a young waitress from Vyšné Nemecké, asked angrily. "I have friends who live 10 kilometres from the border who now have to travel five times as often. It is nothing but discrimination."

But František Pochanič, a car mechanic in his late thirties, disagrees with the assumption that people who live closer to the border need to travel to Ukraine more frequently than others do.

"I live in Vyšné Nemecké, which is two kilometres from the border, and have been to Ukraine only two or three times," he said. "Everybody thinks that living close to the border makes me a smuggler of cheap goods."

"Unfortunately, the situation is more complex than it seems at first," Klára Baloghová, spokeswoman for the Customs Office in Michalovce, told the media at a press conference. "Last year, 6.5 million pieces of cigarettes were illegally taken across the border."

She added that within two days of the revised rules going into effect, the number of cigarettes declared at customs in Veľké Slemence and Čierna nad Tisou had dropped by 80 percent year-on-year.

"If I want to buy 10 packs of cigarettes, I have to cross the border ten times," says Fedor. "We will have to get new passports twice a year because of all the stamps. Can you imagine what a Sk1,000 (passport fee) means to us?"

Those who go to Ukraine only for shopping are hardly interested in Slovakia's having joined the Schengen zone.

"We actually haven't noticed a change," Ľudovít Tóth, mayor of Veľké Slemence, told The Slovak Spectator. "Border checks have been rather strict for some time already. And as for the policemen, we are used to them."

Nevertheless, there are many people for whom Ukraine means more than a shopping paradise: hundreds of them have relatives on the other side.

Since the borders were abolished on December 21, Ukrainians wanting to visit Slovakia are required to apply for a Schengen visa, which costs €35.

"I don't know whether it is cheap or expensive," said businessman Alexander Horditchuk, adding that his business was prosperous enough to afford the fee. "But I suppose that for anyone living in poverty, it might be impossible to travel here very often."

"A Ukrainian family of three can barely afford such an expensive trip," Danko told The Slovak Spectator. "And our residents have difficulties travelling to Ukraine as well. They don't need a visa, but there's no pedestrian crossing in Vyšné Nemecké, so they have to go somewhere else."

The issue of costly visas could be solved by waiving the fees for border region inhabitants visiting their families, Slovak authorities said.

"We would like to have an agreement passed as soon as possible," Slovak Foreign Minister Ján Kubiš told the Sme daily. "It is being developed and we hope it will come into force within a few months."

But this means inhabitants further inland will still have to pay.

"We find the new visa conditions very restrictive," Pavol Bogdan, secretary of Rusyn-Ukrainian Union in Prešov, told The Slovak Spectator. "They may endanger our cultural cooperation. Ukrainians will likely not take part in our annual Rusyn-Ukrainian folk festival this year because they cannot afford the visas."

The various reactions to the change prove the complexity of the situation.

"I don't understand Schengen or the new laws," Irena Ščuroková said. "And I don't know what we will do. My feelings are completely mixed."