U. S. Steel Košice in it for the long-term

FOR MORE than 40 years, steelmaking has been an inseparable part of the image of not only Košice, but all of eastern Slovakia. 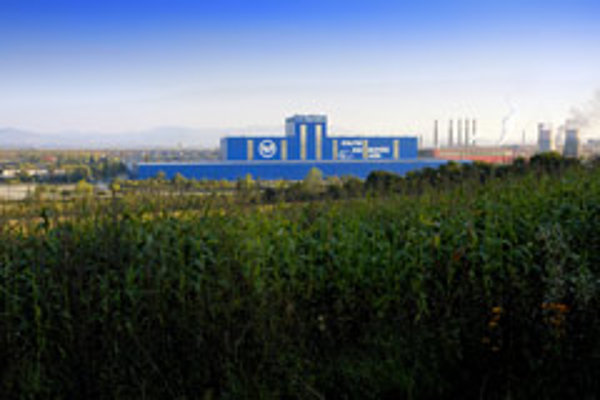 FOR MORE than 40 years, steelmaking has been an inseparable part of the image of not only Košice, but all of eastern Slovakia.

The company behind that tradition, U. S. Steel Košice, combines Slovak technical and international expertise with an American focus on customers. It has become a leader in flat-rolled products in Central Europe.

U. S. Steel Košice was ranked as the best company in Slovakia by the Trend economic weekly in 2005 and 2006. In 2007 the company finished second to Samsung Electronics Slovakia. However, USSK still considers 2007 a successful year, thanks to the launch of its new galvanising line.

"The new galvanising line not only symbolises that the quality of our products has been improving, but it changes the skyline of our plant in the community where we are active," said U. S. Steel Košice president David H. Lohr.

U. S. Steel Košice is the biggest private employer in Slovakia, with about 15,000 employees, including its subsidiary companies. It is also the largest employer in the eastern part of the country and the largest steel producer in Slovakia. It is an integrated producer that does everything from processing iron ore into steel to manufacturing finished products.

U. S. Steel Košice offers a wide assortment of hot rolled, cold rolled and coated products, including tin and dynamo products. It also sells finished products such as spiral welded pipes and radiators, which it manufactures under the Korad trademark.

The new phase in the history of the Košice steelworks started on November 24, 2000, when the metallurgical production and commercial activities were sold to U. S. Steel Group, the steelmaking division of USX, now United States Steel Corporation.

To the American company, taking over VSŽ - renamed U. S. Steel Košice - provided its first entry into European production. It also boosted the production capacity of U. S. Steel by 30 percent, said former company president John H. Goodish at the time of his appointment.

Over the following years, USSK has become a successful partnership between Slovak technical skills and American plant management and market-oriented business experience.

Right after the takeover, U. S. Steel Košice embarked on an ambitious programme of capital investment, customer service improvements and cost reduction, while improving its product quality and environmental performance.

Those continued to be the main goals for Christopher J. Navetta, who replaced Goodish in 2003, and Lohr, who took over the highest post in mid-2005.

When U. S. Steel took over the steel core business at VSŽ, on the company made a number of commitments. It promised to invest $700 million in USSK over the next 10 years, to not cut jobs aside from the natural outflow of employees, and to help the region develop and boost employment.

U. S. Steel Košice met its commitment to invest $700 million to improve its performance, environmental systems and infrastructure in mid-2006 - long before the deadline of 2010.

In 2003, it started its second continuous annealing and tinning lines. In 2004, the third dynamo line for electrical steel was commissioned. And there have been other investment projects.

But the fact that the company has already fulfilled its investment commitment does not mean its modernisation and enhancements have ended. USSK continues to invest in its production capacities, ecological projects and repairs and improvements to its infrastructure.

After 27 months, the line was officially put into operation on September 25, 2007.

"It's the path of the future," Lohr said at the grand opening. "For the company, for its employees, for the region."

It helps the company continue its focus on value-added products for the automotive, packaging, electro-technical, appliance and construction industries.

This new dominant feature of USSK, the blue production hall neighbouring the recently-built continuous annealing line, symbolises the progress that U. S. Steel has made at its Slovak plant since 2000. With an annual capacity of 350,000 metric tonnes, the new facility can serve the growing demand for high-quality, coated sheet products in the Central European automotive and construction industries.

The galvanising line, whose main contractor was the German company SMS Demag, is designed to produce exposed automotive-quality hot dip galvanised and galvannealed materials with a strip thickness between 0.3 and 2.0 millimetres.

The new line is the third galvanising line at USSK, and it almost doubles the plant's production capacity. It uses the latest technology to let the company meet the quality requirements of its most demanding customers: car companies. It also employs 150 people.

Steel production everywhere in the world comes with environmental issues. One recently recognized issue is the production of carbon dioxide (CO2), a greenhouse gas that is considered to be one of the main causes of climate change.

"Converting iron ore into steel requires a carbon reaction that releases CO2, and no one knows how to make steel without having that chemical reaction," Lohr said.

USSK has been focusing on environmental stewardship by improving its soil and water protection, reducing its atmospheric emissions and improving its waste processing. It has introduced an applied environmental management system, based on ISO 14001, and invested millions of crowns into ecological projects to meet the environmental standards and regulations in Slovakia and the EU.

"USSK invested roughly 35 to 40 percent of the investment commitment of $700 million into ecological projects," said Miroslav Kiraľvarga, vice-president of management services and administration. "We did not just invest in the environment because the law required it, but there were also efforts to catch up and keep pace with companies that had better results.

"In this sector, we can at least be proud of what has been done during the last seven years - not only from the viewpoint of the amount of money invested into environmental projects, but also how the environment has improved."

Since 2000, emissions have been reduced by more than 80 percent. The company says its goal is to continuously improve the environment in the region where it is located.

The company has made Safety First its top priority.

"From 2002 to 2007, we reduced the frequency of occupational injuries by almost 80 percent," said Kiraľvarga. "On the other hand, there is still a lot of work to be done in this field because even though there are a few of these injuries, it is still not zero. Nevertheless, we are one of the better locations within the whole corporation."

To promote Slovakia abroad and to attract business investment to this country - and especially to eastern Slovakia - USSK established the Economic Development Center in 2001. The centre has attended and organised investment conferences abroad. In Slovakia, it has prepared seminars and assisted visits by potential investors.

Even though the company's voluntary commitment was to run the centre for two years, USSK ended up running it for six years.

"To sum it up, from 2001 to 2007, the centre drew 26 foreign investors to Slovakia, and they have launched aggregate investments of $250 million and promised to create more than 4,000 jobs in eastern Slovakia," said Kiraľvarga.

These include one of the oldest American industrial companies, Harsco Corporation, which set up business in Slovakia through its Taylor-Wharton division in Košice. One steel scrap supplier, Tube City, has started working directly on the USSK premises. A software company, Zenops, and a manufacturer of automotive leather products, Howe Leather, also set up their businesses in Košice with help from the centre.

In 2007, the centre started cooperating more closely with the Košice Regional Government. The centre moved under the region's umbrella as of January 1, 2008.

"The centre has not vanished, but it moved to the Košice Region (KSK), where we think it belongs," Kiraľvarga said.

Compared to western Slovakia, where employers have already started complaining of a labour force shortage, labour is not a major problem in Košice so far.

"But investors who have come here and established themselves are claiming that there are also some signs of a labour force shortage here," said Kiraľvarga. "It is not because of a labour shortage, but because it is not free any more. That means that those 26 investors arrived and created new positions and qualified people got jobs.

"It is not possible to say that eastern Slovakia does not have a problem with a shortage of qualified workers, as it is a problem to find qualified labour everywhere in Slovakia."

In order to avert a qualified labour shortage in the future, USSK is closely cooperating with local schools to develop future employees for all its units. Company representatives participate in discussions at schools and the Technical University in Košice to help them shape their curricula to reflect the market's needs, which have changed rapidly over the last five to 10 years.

"We are continually working to make sure we have enough qualified employees," said Kiraľvarga. "There is also a clear direction from the top management of the company, including USSK president Lohr, that we must hire, train and retain skilled workers, so when the current workers retire, there will be qualified people ready to take these jobs."

USSK closely cooperates with local metallurgical and secondary technical schools and offers summer internships to university students. Since 2002, USSK has invited university students to work for the company in July and August as part of regular working teams.

The summer internship project lets the company evaluate the most promising students and offer them jobs.

USSK believes that satisfied and educated employees are the key to the company's success.

"I like to use very simple math: about 15,000 people work with USSK and its subsidiaries, which means that roughly 50,000 to 60,000 people, as members of their families, are directly linked to these workers," said Kiraľvarga. "In addition, there are another 50,000 to 60,000 family members bound to our suppliers. So roughly half of the population of Košice, which is about 235,000, are connected to our company."

U. S. Steel Košice recognises and accepts its role as a responsible community partner.

"The company runs an enormous number of support projects in the region," said Ľubomíra Šoltésová, media relations and visitors' centre manager. "The company actually helps in many fields: culture, sports, education and health care, just to mention a few."

As the main company in a region with a large Roma community, USSK seeks ways to improve the situation for the Roma and other needy groups. It started a long-term education and employment project for the Roma, and it also pays a lot of attention to Roma children. Another project offers scholarships to university students from disadvantaged families.

USSK has also become a traditional partner of Košice's International Peace Marathon, as a sponsor and supplying organisational assistance. The marathon is the oldest in Europe and the second-oldest in the world, after the Boston Marathon. USSK also helped the City of Košice complete the Steel Arena.

With all its involvement in the region and the investments into the steel company itself, U. S. Steel Košice has shown that it is here to stay as part of eastern Slovakia's steel industry.