Cops get jail for torture

KAROL Sendrei, a Roma from the mining town of Magnezitovce in south-central Slovakia, died seven years ago after spending 12 hours in police custody. He was handcuffed to a radiator by officers at the local station in Revúca and beaten, kicked and jumped on until he was pronounced dead at 07:15. 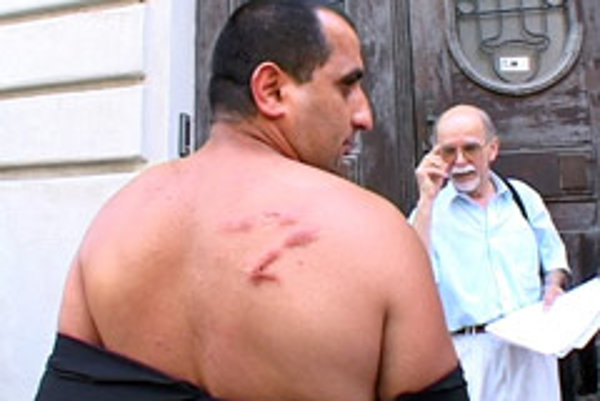 KAROL Sendrei, a Roma from the mining town of Magnezitovce in south-central Slovakia, died seven years ago after spending 12 hours in police custody. He was handcuffed to a radiator by officers at the local station in Revúca and beaten, kicked and jumped on until he was pronounced dead at 07:15.

At the time, the police claimed that Sendrei had suffered his injuries when initially arrested after a scuffle at the house of the mayor of Magnezitovce. However, a court-appointed pathologist said that such injuries could only have resulted from 10-12 hours of violence, judging from the amount of internal bleeding in the skull and abdomen, and the lividity of the external bruising. "I've never seen such injuries in all my time as a pathologist," he said.

"According to the [forensic] specialist, the deceased suffered an exceptionally devastating attack on his person," said the trial judge at the Banská Bystrica regional court on February 28 in handing down his sentence. "He suffered dozens of kicks and punches, and would have died anyway, but his death was hastened when one of the accused jumped on his chest."

The judge found two policemen, Ján K. (30) and Miroslav S. (36), to have been principally responsible, and sentenced each to 8.5 years in jail on charges of torture and cruel conduct. Ladislav K., the officer who jumped on Sendrei's chest, received 7 years for the same offences. Roman R. (33) got four years for torture; the court found that as the officer on duty, even though he didn't participate in the torture of Sendrei, he had a duty to prevent his colleagues from doing so.

Three other officers, all in their thirties or early forties, received suspended sentences of 1-2 years. All of the defendants appealed their sentences to the Supreme Court.

The events leading to the murder of Karol Sendrei began on July 4, 2001. Sendrei's adopted son Robert Gunár, while drunk, broke an ashtray over the head of Dušan K., a fellow patron of Magnezitovce's only pub. Dušan K. went home and called the police, and Ondrej Hudák, the son of the mayor and an officer with the local Jelšava force, responded. In the meantime, Gunár went home to sleep off his intoxication, but Hudák paid him a visit and hauled him out of bed, giving him what witnesses described as "a brutal beating".

The next day, Karol Sendrei, 51, went to the home of Magnezitovce Mayor Andrej Hudák, who had been elected only a week earlier, to complain about his son Ondrej's assault on Gunár. Sendrei's three sons soon joined him at the mayor's house, and neighbours called the police, saying the Sendrei brothers were behaving aggressively.

When the police arrived, they managed with the help of the mayor and his son Ondrej to subdue Karol Sendrei and two of his sons. The third son in the meantime left the scene.

At first, the Sendreis were taken to the police station in Jelšava, where they allege they were punched and kicked. Then they were moved to Revúca, where other officers joined in the beating. In addition to Karol Sendrei's fatal beating, Peter Sendrei and Róbert Gunár also sustained serious injuries.

While the Sendrei sons had a reputation for drunkenness and violence, the death of Karol Sendrei shocked the nation. The OSCE said it was "deeply disturbed" by the killing, and called for a speedy investigation. For the international community, Sendrei's death was the latest in a series of troubling incidents in which Roma had been hurt or killed while in police custody.

In August 1999, for example, a Roma youth named Ľubomír Šarišský, 21, allegedly shot and killed himself at a police station after grabbing a gun from an officer. He was being investigated for stealing a bicycle.

Klára Orgovánová, a Roma and the Government Appointee for Roma Affairs from 2001 to 2006, remembers Sendrei's death as if it were yesterday. "I had just been made the cabinet appointee on July 1, and a few days later all this happened," she told The Slovak Spectator.

"It was my first big case. I remember being very frustrated with the tardiness of the investigation, because at the beginning it seemed so clear, and there were plenty of witnesses who knew exactly what had happened."

Orgovánová said that the Sendrei killing was part of a culture of police aggression towards the Roma. "We had lots of cases where the police responded brutally when called to Roma settlements, but the problem was that because the Roma tend not to be educated, and because of their social position, people often don't believe them when they say they have been mistreated."

However, she said, the recent court verdict was a sign that the anti-Roma culture in the justice system was changing. "Slovak society and the international community should see this decision as a good precedent."