THE FINANCE Ministry is proposing a new solution to a problem which has long kept two groups in Slovak society deadlocked: the owners of property returned under the post-communism restitution laws, and the tenants who still live in their property. 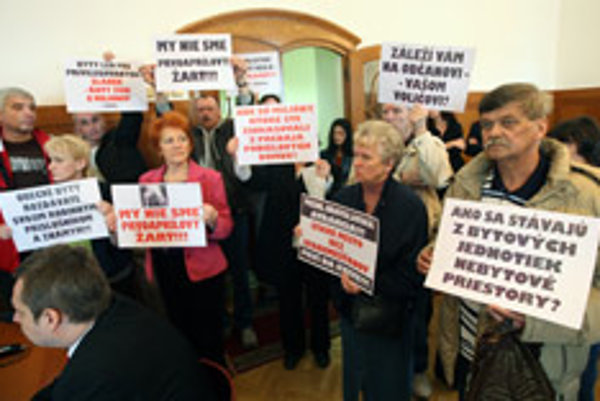 THE FINANCE Ministry is proposing a new solution to a problem which has long kept two groups in Slovak society deadlocked: the owners of property returned under the post-communism restitution laws, and the tenants who still live in their property.

The ministry proposes a 15-percent hike in the regulated rents which tenants now pay to the original owners, whose property was restored following seizure under the former regime. Once the proposal is approved by the government, tenants will be charged higher rents as of May, regardless of who is the owner of the blocks in which they live.

Earlier this year the Fico government said that it would keep regulating the rents beyond the end of 2008.

The renters, mostly older inhabitants who argue that having to pay the full market rates would force them onto the street, say that the 15-percent hike is an acceptable solution; but according to property owners, it's merely a cosmetic change and will only serve to extend the agony of capped rental payments.

The state originally capped the rents in 2003 as compensation for the tenants, who do not enjoy the right to buy the properties in which they live (unlike other former tenants of state housing). But the owners say this makes it impossible for them to invest in reconstruction or any other kind or development.

"We have to respect the rights of the owners, but the government could not agree to lift completely the regulation of rentals," Prime Minister Robert Fico told news television station TA3 on April 9.

The Finance Ministry has submitted its proposal for interdepartmental review.

Earlier this year, Construction Minister Marian Janušek proposed a gradual deregulation of the rents at a rate of 20 percent a year over five years, during which the government would guarantee substitute housing for pensioners and low-income families. But the Fico cabinet rejected the plan.

"If we do not solve it now, we will have to return to the problem in a year or two, or in five years," Janušek told public service broadcaster Slovak Television on March 6. "It could well happen that the state will be forced not only to solve the situation, but to pay fines for infringing ownership rights."

The Finance Ministry now proposes capping monthly rents based on the property's category (i.e. its location and estimated value) and the size of the apartment: tenants living in apartments of the so-called 1st category will pay Sk33.8 per square metre, while for 2nd-category apartments they might be charged a maximum monthly rent of Sk22.6 per square metre. Tenants living in a 3rd-category apartments would pay a maximum of Sk18.10, and Sk11.20 in the 4th category, according to the SITA newswire. If the proposal goes through, tenants will also see appearing on their bills an annual standing charge for storage rooms, and gas, electricity and water utilities.

Kristián Straka of the Right to Housing civil association, which represents the tenants, said that the association understands this as an unavoidable step.

"No price hike will ever please citizens," Straka told The Slovak Spectator. "But we have been explaining to our members the necessity of accepting this proposal by the Finance Ministry."

However, according to Radoslav Procházka, a lawyer who is representing several owners at the European Court of Human Rights in Strasbourg, the Finance Ministry's proposal is not a real solution to the problem.

"This solution is analogical to putting a band aid on an open fracture," Procházka told The Slovak Spectator.

"This proposal in fact means that they will contribute by a few tens of crowns less," Prochadzka said.

For Straka the important point is that the state will continue regulating rents until it finds a better solution.

"It is a temporary solution giving the state time to prepare legislation, which should then be a lasting solution" said Straka.

A permanent solution would be for tenants to be given substitute apartments into which they could move under the same conditions that were created for other citizens, Straka said.

Any lasting solution is possible only with the participation of the state, which rented the tenants the apartments and then in the restitution process returned these apartments to the original owners, Straka added.

If Slovakia were to pass legislation pertaining to this segment of the real estate market, it would take a leading role in the post-socialist Europe and should not worry about court trials in Strasbourg, according to Straka.

However Prochadzka said that the best solution would be to cancel the regulation of rents.

"The second best possibility would be to modify the rents in a way that would cover the reconstruction of the properties and at the same time generate adequate revenues for the owners," Procházka said. "However, it cannot be generally applied so it also would be the second worst solution. The first worst solution is not to do anything or to perform cosmetic corrections like these 15 percent."

Procházka also said that the regulation of rents applies not only to people whose property was returned through restitution proceedings, but also those "whose houses were never taken by the Communist regime but 'only' had the state impose eternal tenants on them."

An owners of one such house, Denis Ščasný, told new television station TA3 that apartment houses such as his are often more than 70 or 80 years old and need hundreds of thousands, or often millions, of crowns in investments, which could not possibly be covered by current rents.

Straka only partially agrees with the claim and said that if owners decided to keep their buildings just as rental properties, there are no grounds to increase the rents because they are in a desolate condition.

"It would be the same as if a taxi driver who carries me in a dilapidated taxi were to ask me to pay a higher fee just because his old car needs more money for repairs," Straka told The Slovak Spectator.

The impasse dates back to the restitution laws that followed the collapse of socialism, during which the state returned about 7,000 apartments to people who had been stripped of their property, according to the Sme daily.

This mostly affected property in larger cities, such as Bratislava, Košice, Nitra and Banská Bystrica. However, no precise estimate exists of how many people would be affected if the cap on the rents was removed.

According to Sme, a rent-controlled, 140-square-metre apartment in an upscale section of Bratislava is let for Sk3,200 a month. The market rental would be Sk21,500 a month.