PRIME Minister Robert Fico recently appealed to Slovaks to be more united and prouder of their nationality. 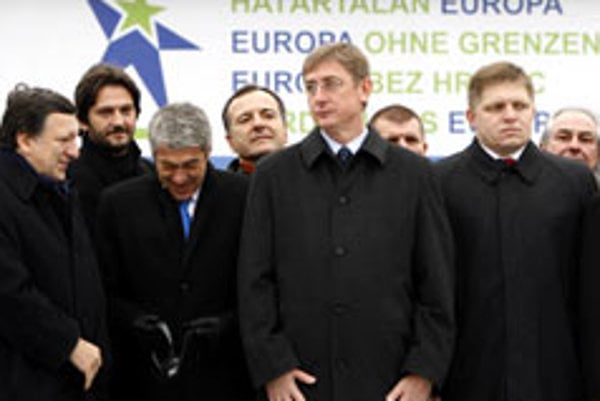 PRIME Minister Robert Fico recently appealed to Slovaks to be more united and prouder of their nationality.

Fico also labelled neighbouring Hungary a potential threat during a speech commemorating the 161st anniversary of the day that Slovaks demanded national equality with other nations within the Austro-Hungarian Monarchy. The celebration was held in Liptovský Mikuláš, where the demands were formulated.

Fico used the anniversary to openly criticise the political situation in Hungary and warn about the influence it might have on Slovakia. While Fico’s coalition partners have been supportive of the prime minister’s take on Hungary, political analysts said he was walking a dangerous political path and that his statements were unstatesmanlike. But they noted that criticisms of Hungary are nothing new for the Fico team.

When commenting on recent political developments in Hungary, where the government of Ferenc Gyurcsány has found itself in the minority, Fico said that the eventual rise of the opposition Fidesz party, led by Viktor Orbán, will be grave for Slovakia. Gyurcsány’s Hungarian Socialist Party is a leftist political force, while Orbán’s Fidesz is a right-wing party.

“Slovakia must stand united now,” Fico declared, adding that Fidesz might give a rise to nationalism and extremism towards Slovakia.

“Slovak parties, regardless of their political orientation, leftist or rightist, must have clear goals when it comes to protecting the state interests,” said Fico as quoted by the SITA newswire. “If we are not clear on this elementary issue, then we will lose all duels.”

Ján Slota, chairman of the junior Slovak National Party (SNS) coalition party, supported Fico at the meeting, which was attended by dozens of people.

“The anti-Slovak forces attacking our Slovak essence are tougher and tougher; I think it’s time to open our eyes, in Liptovský Mikuláš, on this occasion,” Slota said.

Fico also called on Slovak youth not to be ashamed to wear state symbols, and appealed to them to sufficiently master the Slovak language, which he said since many have not.

“If young people don’t hesitate to wear the American or British flag, it should be an honour to wear the Slovak one,” Fico was quoted by the ČTK newswire.

The prime minister said that the new Education Act that is being prepared by Education Minister Ján Mikolaj will change young people’s approach to the Slovak language.

Political analyst Samuel Abrahám said that such statements are not appropriate for the head of a state that is a member of the European Union.

“To strive for some unification of society and to pit our state nationalism against the Hungarian one is the way to hell,” Abrahám told The Slovak Spectator. “The right way is to address this through European structures.”

However, Fico rightly guessed that if Fidesz makes it to power, it would take a much tougher stance towards neighbouring countries, said Grigorij Mesežnikov, president of the Institute for Public Affairs (IVO), a non-governmental think tank.

“From this point of view, Fico’s evaluation is quite correct,” Mesežnikov told The Slovak Spectator. “But the trouble is that he is offering a very improper solution: nationalist mobilisation.”

A similar mobilisation of all Slovak political parties would push the ethnic Hungarian Coalition Party (SMK), which cannot unite with the others on an ethnic basis, into complete isolation, according to Mesežnikov. Furthermore, the SMK co-operates with Fidesz, he added.

“This was not just a criticism of Fidesz, but also a signal of mistrust towards Hungary and Hungarians,” Mesežnikov said.

Fico and his government has not had good relations with the current Hungarian cabinet either, though it is led by Socialists and Gyurcsány, said Mesežnikov.

Fico will keep exploiting tensions between Slovakia and Hungary to strengthen nationalism in his own country, Mesežnikov said, adding that this seems to appeal to part of his constituency.

However, both Hungary and Slovakia are members of the European Union and NATO and, in this context, such a warning and stirring of national issues rings false, Mesežikov concluded.

Fico has already criticised the right-wing Fidesz in the past.

In an interview for the Austrian daily Die Presse on July 11, 2007, he said that “Gyurcsány is under pressure from the extremely nationalist party of Viktor Orbán.”

And Gyurcsány has repeatedly criticised the fact that the SNS of Slota, known for his controversial statements about Hungarians, was part of Slovakia’s ruling coalition.

One of Ján Slota’s most famous statements was: “We will get into our tanks and level Budapest,” which he declared on Radio Twist on March 8, 1999. “We will fight for our territory, square metre by square metre.”

Again, on January 14, 2002, Slota told the Nový Čas daily: “They (the Hungarians) kick us in the head and yet we talk about friendly neighbourly relationships. Let us hope that in the end, Hungarian national colours will not fly over Kriváň and Lomnický Štít.”