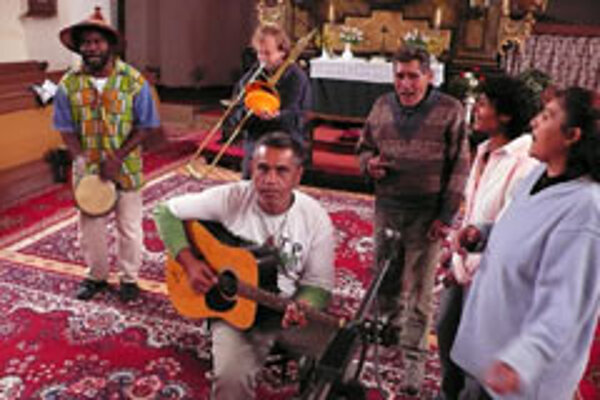 Bratislava
LIVE MUSIC: BOTH Roma and non-Roma musicians will perform ancient Romany tunes at the AfterPhurikane concerts in Bratislava and Nitra. Charming Romany songs that never fail to thrill audiences were set to modern arrangements during a recent series of workshops aimed at encouraging cultural dialogue among artists from different ethnic groups. The concerts feature renowned cellist Jozef Lupták, accordion player Boris Lenko, composer Juraj Dobrakov, and percussionist Thierry Ebam from Africa, who will accompany a number of Roma singers and musicians from several Slovak villages. The Bratislava concert takes place on May 26 at the music club Klub za Zrkadlom at Rovniankova 3. On May 27, the musicians will perform at Nitra's Staré divadlo theatre at Siedmeho pešieho pluku 1. Both concerts start at 19:00 and tickets cost Sk120. For more information, see www.zudro.sk.

Bratislava
HORSE RACE: Turf Gala - World-class equestrian riders and the best horses from across Central and Western Europe compete at the 30th Turf Gala, the region's most prestigious international horse race and one of the peaks of the horse racing season in Slovakia. The event will be full of cultural and social events, including a competition for the most elegant lady's hat.
Starts: Jun 1, 14:00. Admission: Sk40. The Závodisko racecourse, Starohájska 29. Tel: 02/6241-1504, www.zavodisko.sk.

Žilina
FESTIVAL: THE NORTHWESTERN town of Žilina will fill with performers and visitors during the 14th Old Town Festival from May 29 to 31. One of the most anticipated events of the year, the town will welcome more than 50 performers from Slovakia, the Czech Republic, Russia, France and Italy, who will offer a mixture of rock, pop, jazz, funk, rap, classical and folk music. Because this year is also the 800th anniversary of the first written mention of city, the open-air festival will be even more spectacular than in past years. As well as the main programme, visitors will be able to buy products at traditional craft markets and visit a lot of accompanying events for all age groups. The festival, which annually attracts thousands of visitors, will take place at Hlinkovo and Mariánske Squares, starting on May 29 at 14:30 and finishing late on May 31. For more information, visit www.staromestske-slavnosti.sk.

Turecká
CHAMPIONSHIP: Bryndzové halušky - The organisers of the 14th World Championship in Eating Bryndzové Halušky invite all food-lovers to taste the Slovak national meal. To take part in the competition itself, an application has to be submitted in advance.
Starts: May 31, 9:00. Admis-sion: free (participants: Sk1,000
per team). Tel: 0918/683-795, www.haluskyturecka.sk.