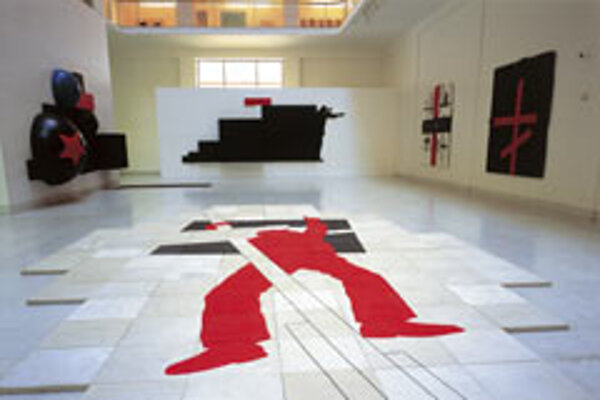 Bratislava
EXHIBITION: RUDOLF SIKORA, one of the most outstanding personalities of modern visual arts in Slovakia, presents a retrospective titled Against Oneself. His 'cosmological conceptualism', which is based on original trends that appeared in the country's artistic scene in the second half of the twentieth century, portrays people's view of Earth and the entire universe. The exhibition is being held at two Bratislava galleries until June 8. Visitors can see Sikora's works at the Esterházy Palace of the Slovak National Gallery at Ľudovít Štúr Square 4, which is open daily except on Mondays from 10:00 to 17:30, and the Palace of Art at SNP Square 12, open on the same days from 10:00 to 18:00. Tickets cost Sk80. For more information, visit www.sng.sk.

Bratislava
FESTIVAL: Wilsonic - Focused mainly on Central and Eastern European artists, the Wilsonic festival connects the best elements of advanced, urban & electronic music fused within the atmosphere of a concert, a club and a party.
Runs: June 6-7, from 17:00 until late at night. Admission: Sk550-Sk990. Tyršovo nábrežie (Danube embankment). Tel: 0903/268-872, www.wilsonic.sk.

Bratislava
EXTREME SPORTS: Ufo Base Jump Day - Seven experienced jumpers from both Slovakia and abroad jump from the Ufo Restaurant more than 60 times to demonstrate one of the most dangerous and exciting sports.
Starts: June 7, 12:00. Admission: free. Nový Most bridge. Tel: 02/6252-0300, www.u-f-o.sk.

Košice
SHOW: WINNIE the Pooh on Stage, a wildly popular show among audiences of all ages, will bring the characters of the Hundred Acre Wood to Košice for the first time. The touring production features the honey-loving Winnie the Pooh and his friends Tigger, Piglet, Eeyore, Rabbit, Kanga, Roo and Owl, who embark on a journey of fun and surprise to discover what makes 'a perfect day'. The show's producers have worked with Disney animators to transform the stage into a magical world full of colours, amazing sounds and lighting effects. A cast of 15 performers takes to the stage under the direction of renowned choreographer Christopher Gattelli. In total, seven performances will take place at the Steel Arena at Nerudova 12 from June 5 to 8. Tickets cost between Sk390 and Sk690. For further information, see www.ges.sk or call 055/6221-345.