Fico rebukes minister, but keeps him on

PRIME Minister Robert Fico has publicly condemned his finance minister, Ján Počiatek, for meeting the boss of a Slovak financial group in Monaco. Fico called the meeting “unethical” and “immoral” given his government’s proclaimed hostility towards such firms. Nevertheless, Počiatek will remain in his post. 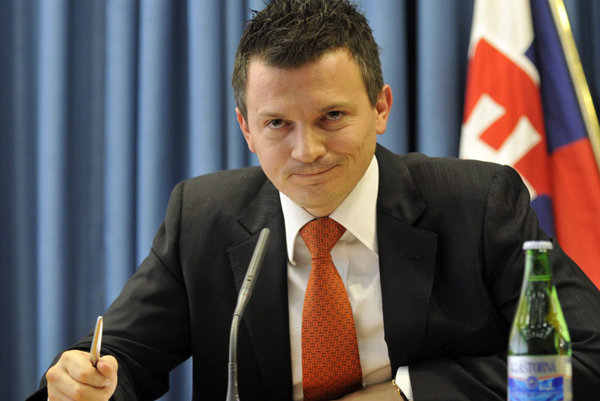 PRIME Minister Robert Fico has publicly condemned his finance minister, Ján Počiatek, for meeting the boss of a Slovak financial group in Monaco. Fico called the meeting “unethical” and “immoral” given his government’s proclaimed hostility towards such firms. Nevertheless, Počiatek will remain in his post.

The rebuke came as the central bank looked into suspicions that there may have been a leak of information during the revaluation of the Slovak crown's so-called central parity rate against the euro in late May. A former finance minister has suggested that a leak may have allowed some financial groups to indulge in insider trading during the revaluation, reaping significant profits.
Minister Počiatek and general director of Bratislava Airport, Karol Biermann, met Ivan Jakabovič, a partner in the J&T financial group, aboard Jakabovič’s yacht in Monte Carlo a few days before the European Central Bank revalued the crown's central parity on May 28, according to Plus Jeden Deň, the tabloid daily which broke the story. Former finance minister Ivan Mikloš declared that the switch to the euro in Slovakia “already has its victors,” naming the financial groups J&T and Istrokapitál and saying that they made hundreds of millions of crown by buying the Slovak currency at the right time.

Central parity is the mid-point exchange rate between the euro and currencies hoping to adopt it and which are governed by the Exchange Rate Mechanism II (ERM II). ERM II rules mean that a currency’s exchange rate should not move more than 15 percent beyond the parity rate without triggering central bank intervention.

The steady appreciation of the Slovak crown earlier this year meant that by late May the crown-euro exchange rate was approaching the limit set under ERM II. At the request of the National Bank of Slovakia and the Finance Ministry, the ECB therefore adjusted the central parity to Sk30.1260 per euro on the evening of May 28. The new compulsory intervention rates within ERM II were reset at Sk34.64 and Sk25.60 per euro and were immediately effective from the opening of foreign exchange markets on May 29. The revaluation gave an immediate fillip to the Slovak crown, which jumped to a new high of Sk30.08 to the euro, before easing slightly to Sk30.23 later on May 29.

Both Počiatek and the financial groups rejected speculation about alleged insider trading, arguing that J&T and Istrokapitál both bought large volumes of Slovak currency ahead of revaluation based on Prime Minister Fico’s public calls for the strongest possible conversion rate for the Slovak crown.
“There was no possibility of an information leak from the government,” Počiatek told media.

While Počiatek received a telling-off from the prime minister, Bratislava Airport CEO Karol Biermann was not so lucky: Fico ordered Transport Minister Ľubomír Vážny to sack him, along with the entire senior management of the airport. While Biermann had been in Monaco with Počiatek, the other airport managers had not. Fico gave no reason for their dismissal.

Počiatek said he had underestimated the situation due to his lack of political experience, but said that that did not mean he should resign.

“In no way have I violated my loyalty to the government,” Počiatek said, according to the Sme daily. “I am 100 percent sure that I have not violated the law in any of its aspects so I currently do not see a reason to resign.”

Political ethics watchdog Transparency International Slovakia said that the problem was not so much the fact that Počiatek met businesspeople, but rather where and how.

“I do think the finance minister should be meeting businessmen – just not on yachts in Monaco, but rather across the negotiating table, since all citizens have a right to know what they have been discussing and why they met,” Emília Beblavá, the director of Transparency International Slovakia, told The Slovak Spectator.  “I consider such a selective approach towards a selective group of businessmen to be absolutely unacceptable, as is the acceptance of an invitation to such meetings in Monaco.”

According to Beblavá, there is a definite risk that the finance minister’s relationship with J&T could have helped the financial group to make a fortune by trading in the currency.

“Neither the minister nor J&T can erase concerns that are legitimate and exist,” Beblavá said. “The minister comes from a business environment but he is currently a representative of the public sector.”

She said that Počiatek, as finance minister, has access to sensitive information, since he decides about numerous public tenders, and his behaviour is therefore simply incompatible with his position.
As for the suspicion of insider trading, the prime minister said that Počiatek and Ivan Šramko, the governor of the National Bank of Slovakia, had requested revaluation of central parity in a letter but neither of them had access to information about how the rate would finally change.

“It is bad if someone has abused the information, but the question I am asking is whether the state has been damaged [by this act]” Fico told a press conference on June 18.

Governor Šramko delivered a report on trading in the Slovak crown on May 28 to members of the parliamentary financial committee. However, Mikloš, a deputy for the opposition Slovak Democratic and Christian Union (SDKÚ), said that the report did not answer the question of whether there had been any insider trading.

The Slovak market is now waiting with bated breath for the final conversion rate for the Slovak crown to the euro, which will be set on July 8. Market watchers predict that the conversion rate will be somewhere very close to the new central parity.

Fico has been calling for the strongest possible conversion rate since the country’s membership of the euro received the backing of the European Commission.

“The position of the Slovak government is unambiguous: the strongest possible exchange rate,” Fico said on May 12.

The prime minister said the government wants Slovaks to pay the least possible number of Slovak crowns for each euro, and trade unions have joined Fico in his campaign for a strong conversion rate.

“Prime Minister Robert Fico publicly said that the government would be pushing for the strongest possible exchange rate during negotiations with the European Union, while the governor of the National Bank of Slovakia, Ivan Šramko, also supported the expectation of growth [in the value] of the Slovak crown,” J&T spokesman Maroš Sýkora told Sme.

However, the prime minister made clear that, for him, the most serious issue was his finance minister’s proximity to the financial groups, something which he considers incompatible with the policies of his government.

“I keep saying that I like financial groups just as much as a goat likes a knife,” Fico told journalists.

Fico stressed that he has a major problem with financial groups operating in Slovakia and the policies of his government have to reflect that.

“I publicly condemn the behaviour of the finance minister,” Fico told a press conference. “If we have to fight against financial groups and if the finance minister appears on a yacht with a representative of this group in a foreign country then it is not credible. It is immoral and it goes against how the Slovak government wants to behave towards financial groups,” Fico stated.

However, Emília Beblavá of Transparency International maintained that the prime minister was using double standards when he sacked the boss of the airport but only scolded the minister.

“They should both have been penalised in the same way since their behaviour is not compatible with the way public officials should operate,” Beblavá told The Slovak Spectator.

The editor of Trend financial weekly, Martin Jaroš, agreed that Počiatek has done something that should have not have been done by any minister.

“He evoked suspicions that he is meeting people to whom he could potentially have provided insider information,” Jaroš told The Slovak Spectator. “We do not know whether they really talked about the parity rate, but the suspicion itself disqualifies the minister. That said, I have to acknowledge that Počiatek is among the more competent ministers in the Fico government.”