ALTHOUGH not many folklore songs make the popular music charts, no discotheque in Slovakia boasts a higher attendance than the Folk Festival in Východná in north-west Slovakia. 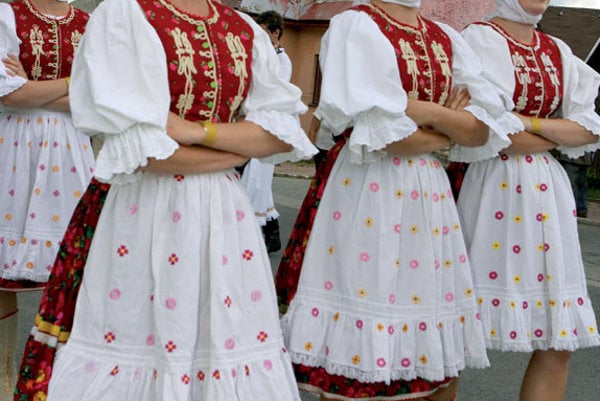 ALTHOUGH not many folklore songs make the popular music charts, no discotheque in Slovakia boasts a higher attendance than the Folk Festival in Východná in north-west Slovakia.

Every year, thousands of folk art lovers enjoy a rich, three-day program that embraces not only dance and song but also exhibitions, theater shows, workshops and even courses in folk dance.
Since the 1950s, the Východná festival has drawn almost 30,000 visitors to its 53 stagings.
In 2006, the amphitheatre where it usually takes place was renovated, enabling organisers to increase the number of performances and accompanying events.

“The renovation was a key point in our efforts to make the program richer,” said Pavel Krupa, the mayor of Východná. “We also intend to organize seven or eight similar festivals or celebrations every year. Our aim is to use the renovated amphitheater as fully as possible.”

However, building a new amphitheatre was only half the battle. Preparing for the big event takes months, even after so many years of experience.

“To ensure that everything is ready in time, we always start to prepare the amphitheatre at the beginning of April,” Krupa told SPEX. “We care deeply about the success of the festival, so every year we landscape the surroundings, plant new trees, cut the grass and arrange all the necessary services. This is only natural given that the event helps to promote our village throughout Slovakia as well as abroad.”

But the local authorities are not the only ones who take part in the preparations. “Our residents play a big part in the festival,” Krupa said. “For example, many help the municipality by sewing or embroidering costumes that are later worn by performers.”

According to Krupa, families who live in Východná look forward to the festival for several reasons.
“Since it’s the most important celebration in our village, people change their everyday lives by decorating their houses and cooking various specialties,” he said. “Moreover, the festival is a good occasion for their relatives to pay a visit to Východná. So you have families meeting up after a long time and attending the performances together, which makes for a particularly cheerful atmosphere.”

Nevertheless, the residents of Východná and their relatives are far from the only visitors of the festival.

“The Východná Folk Festival is the oldest event of its kind in Slovakia,” Krupa said. “With such a long tradition and with so many first-rate artists performing here every year, it’s not difficult to attract tourists and folklore enthusiasts.”

The prestige of the festival is underlined by the fact that it is held under the auspices of the UN’s global cultural fund, UNESCO. It is also one of the priorities of “cultural development” in Žilina region.

Festival manager Jana Liptáková, from the National Public Education Center, believes that Východná’s reputation rests on its high-quality program and the richness of Slovakia’s cultural heritage.

“Of course, the festival is popular especially because of the talented singers, choreographers and musicians who perform there every year, but the related socio-cultural aspects are equally important,” Liptáková told SPEX. “By promoting Slovak lore, it brings our people closer to one another, helps to raise their awareness of social diversity, and creates a sense of patriotism.”
Although the quality criteria for performances remain the same every year, the line-up of artists changes constantly.

“This year, for instance, we focused on ensembles that are celebrating an anniversary, like Zemplín, Technik, Urpín, Mostár, Partizán and many others,” Liptáková said. “This ‘jubilee criterion’ was also used when choosing individual amateur and professional artists and children’s folklore ensembles. Another recurring theme in this year’s festival is bells and clappers.”
Liptáková added that since performing at Východná is considered a great privilege, many more artists than can be accepted applied to take part in the program.

“Unfortunately, we don’t have enough room to invite them all,” she said. “We have to make a lot of tough choices, and use criteria such as the number of awards an ensemble has won at national and international competitions.”

Liptáková said that the highlights of the 2008 festival would include two drama performances - Adam Šangala by the Andrej Bagar Theater from Nitra, and Čin-čin by Jozef Gregor Tajovský Theater of Zvolen. She added that visitors should not miss performances by folk ensembles from abroad.
“We are especially looking forward to performances by dancers and singers from Italy, Spain, and even Turkey,” Liptáková said.

Famous Slovak actors will also take part in the program as presenters, something new from preceding years.

“It occurred to us to invite several important personalities who we knew to be attached to Slovak folklore to present individual acts,” Liptáková said. “Stars such as Ján Kroner, Ján Gallovič, Eva Pavlíková and Radko Kuric all accepted our offer.”

Liptáková added that despite the increasingly frenetic pace of life in Slovakia, the festival remains well-attended.

“Attendance has always been extremely high and we expect a similar, if not better, turnout for our 54th year as well,” she said. “Hopefully, the weather will also be in our favor. Nothing improves the overall atmosphere of the festival more than sunshine on the faces of visitors and participants.”

The Východná Folklore Festival 2008 takes place from July 4 to 6 at the new amphitheatre. Tickets cost Sk200 for a set of morning or afternoon performances. For more information and a complete program, see www.vychodna.net.