Fico's march to a socially-oriented state

THE TIME has come for a “very serious return” to a socially-oriented state in Slovakia, Slovak Prime Minister Robert Fico declared as he shared his vision of how the government intends to use the second half of its term in office. The Fico team promises more subsidies, more stability in the pension system and some clean-ups within state institutions, which it says could save money and allow greater state generosity via social programmes. 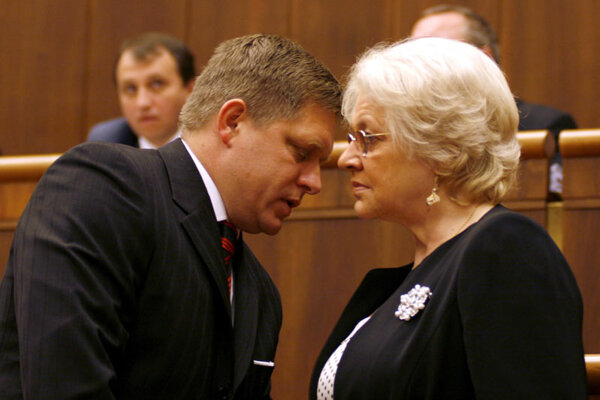 THE TIME has come for a “very serious return” to a socially-oriented state in Slovakia, Slovak Prime Minister Robert Fico declared as he shared his vision of how the government intends to use the second half of its term in office. The Fico team promises more subsidies, more stability in the pension system and some clean-ups within state institutions, which it says could save money and allow greater state generosity via social programmes.

While Fico’s minister of labour and social affairs, Viera Tomanová, fully identifies with the prime minister’s vision of a socially-oriented state, the opposition and observers remain rather sceptical about the government’s potential to turn what Fico has promised into reality.

"The social aspect is absolutely crucial for us,” the prime minister told media on June 25 as he concluded his mid-term round of inspections at government ministries with a visit to the Labour Ministry. Fico said his visit to the Labour Ministry had been left as the climax of his departmental inspections as a reflection of how significant social policy is to his government’s agenda, stating “Today Slovakia is much closer to a socially-oriented state than the country was when we took over the ministry.”

However, the prime minister has repeatedly said that the return to what he calls a more socially-just society should not be financed through raising taxes or by deepening the public finance deficit. Instead, ministries should operate more economically, he said.

Fico in early June tasked the Finance Ministry to help the government to pursue its social policies based on the improved performance of the economy and stable public finances. However, for Fico the Labour Ministry is of strategic importance for achieving his goal.

“This [labour] ministry is the stronghold of the social policies of this government,” Fico said on June 25.

The ministry, under Tomanová’s management, has revised the Labour Code, making it kinder to employees and stricter towards employers, and has also altered reforms of the country’s pension system initiated by the previous government, which had given people the option of saving for their pensions with private pension funds.

Over the past couple of months, in particular fuelled by the resignation of Health Minister Ivan Valentovič, local media has been speculating about whether Tomanová is about to be replaced.

However, on June 25, Fico rejected the speculation and said that the minister has his full support.
According to the prime minister, Tomanová’s ministry had prepared a package of measures to fight both the potential negative impact of euro adoption on socially vulnerable groups and the effects of the rise in world food prices. The ruling coalition has also been talking about increasing the one-off subsidy for first-born children, as well as advantageous loans for newly-married couples and Christmas bonuses for pensioners.

Eugen Jurzyca, director of the Institute for Economic and Social Reforms (INEKO), said that Fico’s statements on building a socially-oriented state are similar to many other statements he has made.

“The probability of Robert Fico giving Slovakia the character of a social state is [now] the same as if he had not said anything at all,” Jurzyca told The Slovak Spectator.

If, for example, the system of public procurement improves, the social system gets more transparent, and the business environment is refined, poverty would certainly drop in Slovakia and there would be more funds for old-age pensions, for example, Jurzyca said.

“However, in terms of legislation, the government has so far proceeded either in the opposite direction or - in the better cases - it has simply not worsened existing situation,” Jurzyca added.
What is fundamental, though, according to Radovan Ďurana of the Institute of Economic and Social Studies (INESS), is that any increase of subsidies which is not targeted at those who are really in need is ultimately a waste of funds which will create inflationary pressure.

As for Fico’s plans to obtain funds through savings and reductions, Ďurana said he has not yet observed any encouraging trend in the Fico government’s behaviour.

“Despite the heralded lay-off of employees and cancellation of some state administration offices, the government has so far not managed to halt the annual increase in wage expenses,” Ďurana told The Slovak Spectator. “Over the past two years the government has saved only a minimal amount of funds; this is why we remain sceptical about statements regarding savings in upcoming years.”
As for the half-time verdict on the current government’s performance, Jurzyca said it is to its credit that the government has not reverted basic economic reforms.

“Professionally, this was not much of an achievement, but in fact politically it was,” Jurzyca said. “However, the government is not continuing to improve the business environment, which is a precondition for the mid-term sustainability of economic growth at the very least.”

Ďurana agrees that the government under the management of Smer has not yet adopted laws which have fundamentally affected the economy.

However some minor shifts can be sensed already, such as making the Labour Code more severe, the ban on health insurers from making a profit, the speeded-up process of property expropriation or a fee for electricity exports, said Ďurana.

According to Jurzyca, the government has not fundamentally reformed the healthcare, education or pension systems, or shaken up science, sport and culture, even though these departments have been in urgent need of change.

“I consider what the most popular politicians have been doing to be a sort of counter-enlightenment,” Jurzyca told The Slovak Spectator. “If, in the long run, they keep repeating that traders, bankers, managers and wealthy people are to blame for high prices; if they ridicule the representatives of the neighbouring state; if they say that the worst thing about problems is that they are publicised; then after a certain time, a critical mass of Slovak voters will end up with misguided beliefs about how Slovakia needs to be managed.”

Petra Šrámková contributed to this report