THIS August 21 is the 40th anniversary of the occupation of Czechoslovakia by Russian–led troops.Between the night of August 20 and the early morning hours of August 21, the Russian army and troops from the Warsaw Pact countries rolled onto the streets of what is now the Czech Republic and Slovakia. They had been ordered there to put an end to the Prague Spring, the spate of democratic reforms instituted by the progressive leadership in Prague, led by the charismatic Alexander Dubček. 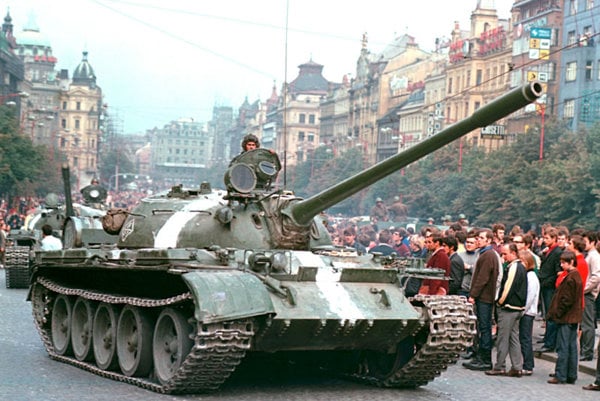 THIS August 21 is the 40th anniversary of the occupation of Czechoslovakia by Russian–led troops.Between the night of August 20 and the early morning hours of August 21, the Russian army and troops from the Warsaw Pact countries rolled onto the streets of what is now the Czech Republic and Slovakia. They had been ordered there to put an end to the Prague Spring, the spate of democratic reforms instituted by the progressive leadership in Prague, led by the charismatic Alexander Dubček.

The Warsaw Pact troops pulled out of Czechoslovakia in November 1968, but the Soviet troops stayed until 1991.

Agneša Kalinová, a journalist from Bratislava who experienced the invasion first hand, told The Slovak Spectator that the invasion weakened the Soviet Union's standing in the world, and likely led to the fall of Communism, even if that took another 20 years.

The origins of the invasion

The Warsaw Pact was a military treaty signed in the Polish capital in 1955. Its signatories were Albania, Bulgaria, Czechoslovakia, East Germany, Hungary, Poland, Romania, and the Soviet Union.

Its creators called it The Treaty of Friendship, Cooperation and Mutual Assistance, but it was in reality a reaction to the “imperialists from the West,” who formed the NATO Alliance in 1949 and re–armed West Germany in 1954.

The occupation successfully halted reform in Czechoslovakia, which had begun in the middle of the 1960s. Under the leadership of Dubček and other reformers, Czechoslovakia had adopted "socialism with a human face."

One of its proponents was political analyst Miroslav Kusý.

Memories of a dissident

A commonly–heard opinion nowadays is that the Prague Spring was not much more than a declaration that the system was reformed, even though it never could have been. But Kusý disagrees.

The discussion about basic human rights was restored during that short window of time, he said, and censorship was lifted, which was a huge step for the regime.

“It was something unheard of in a communist country,” Kusý told The Slovak Spectator. "People were allowed to speak openly. And they also began saying their grievances and requirements openly, at last. In 1968, there was hope in Czechoslovakia.”

Kusý said this hope began when Dubček became the First Secretary of the Communist Party in January 1968.

“The threat of the Soviets coming was still looming large, but we did not take it seriously until the last moment,” he said.

And when they came, it was definitely a shock for all of Czechoslovakia, he said.

Kusý remembers standing on Pražská Street in the centre of Bratislava at six in the morning and watching the tanks roll by, when his friend Gustáv Husák approached him.

Husák replaced Dubček after the invasion. In 1975, Husák held two positions: General Secretary of the Communist Party and President of Czechoslovakia.

He remained president until November 1989.

That day, Husák had just attended a meeting of the Central Committee of the Communist Party, where he said everyone was hysterical, shaking their heads, and even crying.

Kusý recalled that Husák then looked into the distance and, like a prophet, vowed: “I will save this nation, even if everyone spits in my eyes for it.”

Those words would soon take on a very different meaning.

After the occupation, Kusý was asked to work as Husák’s adviser and head of the ideology department of the Central Committee of the Communist Party, which he did for almost half a year.

Kusý says he accepted the position because he thought he could influence Husák not to completely reverse the reforms made during the Prague Spring.

After all, Husák kept telling everyone: "We rise and fall with Dubček."

But after several months, Kusý says Husák did a complete about–face, and began pursuing a pro-Brezhnev policy. Kusý was sacked soon after.

Husák then implemented the Normalisation Period, which resulted in ruthless political cleansing on all levels and a total ban on any opposition.

Kusý believes that, in a certain way, Husák stuck to his pledge from August 21.
He “saved” the country, but in a way that put himself and his career above everything else, he said.

“Husák followed every wish he read in Brezhnev’s eyes, and even more,” Kusý added.
Kusý was also fired from Comenius University, where he had been a philosophy professor. So he worked as a labourer.

In 1977, he became one of the original signatories of the Charter 77, which called for basic human rights in Czechoslovakia.

This resulted in Kusý being detained by the Communist-era secret police (ŠtB) for 48 hours about 20 times.

He was fully taken into custody twice: once on suspicion of smuggling forbidden literature; and once for laying flowers at the memorial to Danka Košanová, a Bratislava student who was killed during the Russian invasion in August 1968.

Kusý said that the worst thing about that period was that his friends and colleagues avoided him in public.
“I was convinced that friendship is eternal,” he said. “This showed that it isn’t true.”
But he also experienced examples of kindness. When he was unemployed in 1969, a Catholic activist visited him and gave him a thousand crowns that had been collected for him.When Kusý asked why she was being so kind, she replied: “For us, you are a brother in need. We know how it feels.”

Agneša Kalinová, a Bratislava journalist, also has vivid memories of the invasion.

She remembers spending the night of August 20 walking in downtown Bratislava and talking with a friend’s son who was visiting from Germany.

In the evening, she and her husband watched O slávnosti a hostech (The Party and the Guests), by Czech director Jan Němec, which is a Kafkaesque allegory for totalitarianism.

In the film, the characters arrive at what they believe is a garden party, only to find they have been imprisoned by their hosts.

At the end of the film, one of the guests escapes, and is chased. The sound of barking dogs is heard as the screen fades to black.

Kalinová told The Slovak Spectator that as the dogs were barking in the film, the phone in her flat began ringing. It was their neighbour, who told them that Soviet tanks were roaring into Bratislava.

By that time, Kalinová was working for the magazine Kultúrny život (Cultural life), whose editors were the first to sign a protest, on August 21.

As a result, Kultúrny život became the first magazine to be banned in Slovakia, and Kalinová was forbidden to work in the sphere of culture.

Kalinová said that the Soviet Union invaded Czechoslovakia to prevent it from serving as an example to the other satellite states.

“But it took them a year to pacify Czechoslovakia,” she said.

Kalinová believes the occupation of Czechoslovakia marked the beginning of the end of the Soviet empire.

The invasion damaged the Soviet Union's standing in the world, forcing it to sign the Helsinki Treaty in 1975, which required adherence to basic human rights.

For regular people, the occupation caused a schism in their lives, Kalinová said.
“Many lives were derailed and never got back on track,” she said.

Kalinová's life was derailed, too. In 1971, her husband and she found a listening device in their flat.

They protested, and the story was picked up by foreign media. They were immediately detained.

Kalinová was kept in custody for nine weeks, but her husband was sentenced to two years for incitement against the totalitarian regime.

The evidence against him was his book, Tisíc a jeden vtip (A Thousand and One Jokes), which included political humour.

In 1978, Kaliná and her husband emigrated to Munich, where she worked as a journalist for Radio Free Europe. She still lives in Munich, but her husband died in 1981.

According to unofficial published estimates, there were about 150,000 soldiers and civilian employees of the Soviet army in Czechoslovakia until 1991.