A piece of Portugal comes to Bratislava

WHEN do people begin to feel they belong to a certain nation? When is the moment that a foreigner becomes a member of a nationality? How can the notion of national identity be explained? Does it manifest itself through the language we speak, the territory in which we were born or where we live? Or, is it simply a piece of a paper, like a passport? Twenty-one contemporary artists, all from an aged nation one would not expect such questions from, deal with these questions. They are Portuguese. 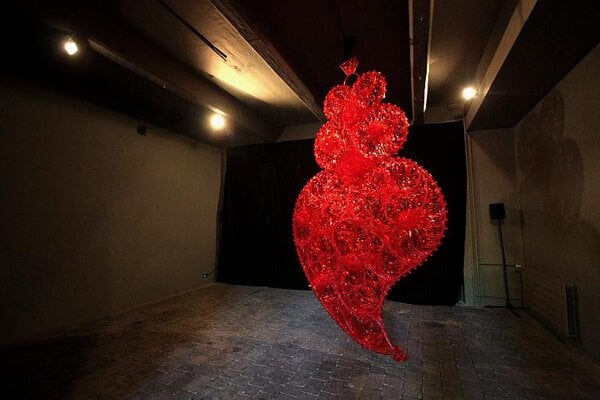 Two exhibits, the Red Independent Heart and Everything for the Nation, were highlights at Café Portugal. (Source: Courtesy of Design Factory)
Font size:A-|A+0

WHEN do people begin to feel they belong to a certain nation? When is the moment that a foreigner becomes a member of a nationality? How can the notion of national identity be explained? Does it manifest itself through the language we speak, the territory in which we were born or where we live? Or, is it simply a piece of a paper, like a passport? Twenty-one contemporary artists, all from an aged nation one would not expect such questions from, deal with these questions. They are Portuguese.

On the occasion of Portuguese President Aníbal Cavaco Silva’s visit, their works were exhibited in the Café Portugal display, held at the Design Factory in Bratislava between September 5 and 21.

Curator Filipa Oliveira designed a coherent exhibition made up of the works of a very diverse group of young Portuguese artists, all of whom are attentive and full of curiosity. Additionaly, they ask universal questions. In seeing, feeling and hearing about the history, traditions, and culture of Portugal, the Slovak public had the opportunity to reflect upon their own situation and identity.

“I was invited to organise an exhibition of works about Portugal created by Portuguese artists,” Oliveira says in the interview published in the exhibition’s catalogue. “During my research for the project I realised I was bringing together a group of people whose work deals with the idea of national identity. I wasn’t interested in mere landscape or monument photographs, I was looking for the vision of people finding their own way in a country, and not flying in a helicopter photographing things from above.”

“When we approach the topic of identity, it is possible to establish a relation with another country, because this is a transnational issue. The Slovak Republic’s recent history has been quite traumatic, in a way we can also relate to. Therefore, I thought it was important to include in the exhibition the Colonial War and the dictatorship, a history with its traumas, a past which isn’t just about the glory of the discoveries.”

At the exhibition, catalogue in hand while listening to fado songs interpreted by Amália Rodrigues (the most important singer of this genre in Portugal), visitors can discover what it means to be Portuguese and trace the history and traditions of the country.

The Red Independent Heart by Joana Vasconcelos was one of the most eye-catching exhibits on display. It reflected upon two Portuguese traditions – the fado and the filigree from the Viana region. This three-metre high sculpture - inspired by a jewellery piece essential in northern Portugal’s marriage tradition – was created from about 5,000 red, transparent cutlery pieces. Its name is borrowed from the lyrics of a fado song by Amália.

In his painting depicting the tomb of the first king of Portugal, D. Aflonso Henriques from the 12th century, artist António Olaio asked two questions simultaneously: Who was the founder of the nation and the territory? And when did the founder of Portugal begin to feel Portuguese?

Works by Joao Fonte Santa and Miguel Palma dealt respectfully with national monuments, many of which were destroyed or damaged in Portugal to make space for new constructions or simply neglected, though they had the official national monument stamp.

The exhibited painting by Paulo Mendes depicts a portrait of Salazar, the authoritarian dictator who ruled Portugal for more than 40 years, in a backstage room. Before his death in 1970 his portraits were omnipresent and, after his death, they were put away in the storage rooms of museums. Forgotten. Mendes’ work recalls a similar situation in Slovakia when, after the fall of the communist regime in 1989, all sculptures and paintings of Lenin, Gottwald, Brezhnev and others belonging to the previous regime ended up hidden in storage.

Each of the exhibited works create part of a mosaic which gives a concrete and comprehensive view of Portugal’s culture and history. Furthermore, they raise questions which Slovaks are also seeking to answer.