Slovaks look out for old age

SURVEYS by the Banking Association of Slovakia suggest that the knowledge of Slovaks about financial products is quite weak. However, this is not the case with life insurance products. Slovaks are, on average, more interested in life insurance and in how they will live after they retire than in the rest of Europe. 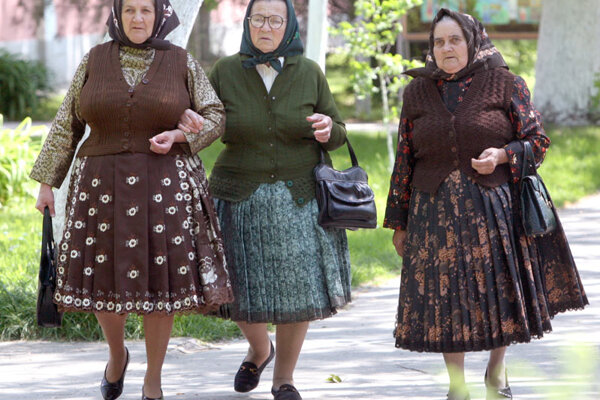 Slovaks are more interested in how they will live after they retire than people in many other countries in Europe. (Source: Sme - Pavol Funtál)
Font size:A-|A+

SURVEYS by the Banking Association of Slovakia suggest that the knowledge of Slovaks about financial products is quite weak. However, this is not the case with life insurance products. Slovaks are, on average, more interested in life insurance and in how they will live after they retire than in the rest of Europe.

Slovaks can save for their retirement in three pillars. The capitalisation pillar, or second pillar, was one of the main attributes of the Mikuláš Dzurinda cabinet’s old-age pension reform. Clients can now redirect 50 percent of their social insurance fees into the capitalisation pillar and these funds are managed by private pension fund management companies. The rest of the insurance fees go into the first pillar, the pay-as-you-go-system administered by the public social security provider Sociálna Poisťovňa. The third pillar is a voluntary supplementary saving system which may include life insurance and supplementary pension insurance.

The interest of Slovaks in their old age pensions was encouraged mainly by the tax reform and the second pillar which was established in 2005, said insurers.

“The approach of Slovaks has changed thanks to pension reform, because when deciding whether to join the second pillar or not Slovaks have to consider their possible incomes at retirement age and their savings for retirement,” said Judita Smatanová, spokeswoman of Union Poistovňa insurer.

The fact that the share of life insurance among overall insurance premiums is increasing confirms this fact, said Dana Macková, member of the board of directors of Wüstenrot Poisťovňa.

“Along with higher living standards, people are more and more looking to the future and not just the present,” she said. “That is why they think of insuring their life, health, and old age, but also their property and their children.”

This year, Slovakia was for the first time included in a global survey by AXA insurer Retirement Scope.

While 72 percent of Slovaks aged between 25 and 44 years are thinking about their post-retirement situation, the figure is only 47 percent of respondents among the older generations. 81 percent of people with high incomes are preparing for their retirement while only 46 percent of low-income respondents are actively considering it.

The fact that more high-income people are preparing for retirement is not surprising, said Marek Zeman, director of AXA’s communication department. These people have a good knowledge of the pension system and relevant financial products. At the same time it is simpler for them to put aside a part of their finances to secure their old-age income.

“However, the significant difference in the approach of different age groups is surprising,” he said. “It might have been expected that people older than 45 would have been more motivated to resolve their financial situation for retirement as their age is closer to the retirement age.”

He explained that older working people are probably used to relying more on the state and the compulsory social insurance system. The younger generation, by contrast, uses more alternative opportunities to secure their old-age income, Zeman said.

Tax reform was the significant impulse to start saving for retirement for 35 percent of working Slovaks, according to the survey. Financial reasons (32 percent) and advice from relatives and friends (31 percent) were among other frequently cited reasons. Economically active Slovaks start saving for their pension at the age of 34 on average, which is close to the European average of 33.

For 23 percent of retired Slovaks, reaching the age of 50 was the reason to start saving for retirement. The average age at which current old-age pensioners started their savings for retirement was 49.

Slovaks’ knowledge of insurance and pension products, focused on securing sufficient income for their retirement, is improving, said the insurance companies.

“It is true that some life insurance policies which people signed, especially several years ago, are not ideal,” said Macková. “The insured sums are not sufficient. The needs of clients are often greater than their agreed coverage.”

However, she said, the situation is getting better and the average sums insured are growing continuously.

At the same time, information about insurance has become more accessible to the public and the professional knowledge of insurance agents is increasing too.

Smatanová thinks that the level of knowledge still lags behind western European countries but is improving thanks to competition in the insurance market, with insurers spreading information via their campaigns and financial advisors.

Thanks to the fact that pension reform has been such a large topic, the knowledge of Slovaks about pension and life insurance products is rather higher than about other financial products, said Zeman.

“However, that does not mean it is perfect and that there is nothing more to learn,” he told The Slovak Spectator. “For example, only 28 percent of Slovaks have a picture of how high their overall income will be after they retire, according to the AXA survey.”