THE ONE annual vote which has the potential to bring cabinets to their knees promises no nail-biting experiences for the Slovak government this year. Robert Fico and his team delivered this year’s state budget to parliament on November 26 after amending some of the numbers in the October 15 cabinet-approved draft and citing the looming global economic slowdown as the main reason for doing so. 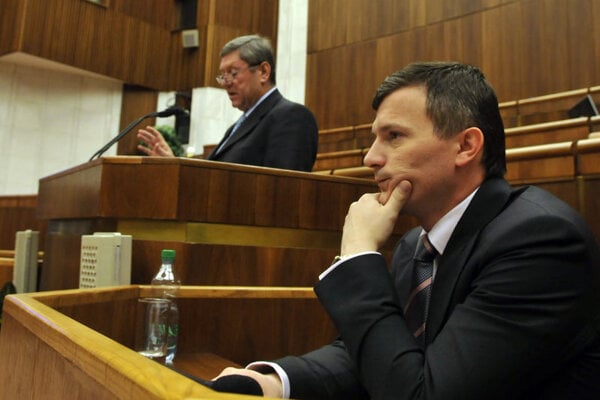 THE ONE annual vote which has the potential to bring cabinets to their knees promises no nail-biting experiences for the Slovak government this year. Robert Fico and his team delivered this year’s state budget to parliament on November 26 after amending some of the numbers in the October 15 cabinet-approved draft and citing the looming global economic slowdown as the main reason for doing so.

The Fico team reduced budgeted revenues by €122.7 million to €13.099 billion and widened the planned deficit from €886.7 million to €1.009 billion. Planned spending was left unchanged at €14.109 billion. The state’s fiscal deficit target thus rises from the originally planned 1.7 percent of gross domestic product (GDP) to 2.08 percent.

Finance Ministry spokesman Miroslav Šmál told The Slovak Spectator that the financial crisis is the main reason behind the higher deficit target.

Due to the global crisis the ministry has modified its prognosis for economic growth for 2009 from 6.5 percent to 4.6 percent, which also has implications for the state budget, Šmál said. He added that he doesn’t expect any further revision of the deficit target.

“Despite all the positives in the development of Slovakia’s economy, it was necessary to revise the estimate for tax and payroll revenues to the state budget,” Počiatek said.

However the finance minister hit an optimistic note, suggesting that compared to the planned deficit for 2008, at 2.3 percent of GDP, next year’s deficit should still be lower.

The draft budget proves that it is possible to secure the healthy development of the public finances while fulfilling the government’s programme focused first of all on people, Počiatek said.

“There will be no changes in our social programmes,” Šmál added.

“Inflating the deficit should be the last resort for saving the economy in the event of a threatened recession,” Peter Goliáš, an analyst with the economic think-tank INEKO, told The Slovak Spectator. “Nothing like this is threatening Slovakia, with growth predictions moving at between 3 and 5 percent.”

According to Goliáš, the government should cut expenses and continue lowering the deficit.

“By increasing the deficit the government has pushed the country deeper into debt and thus reduced the reserves that Slovakia has for solving the crisis,” Goliáš said.

Meanwhile, Prime Minister Robert Fico said that next year’s deficit will be the lowest in Slovakia’s history. Fico also suggested that all European countries are increasing their deficit projections.

“We will fall within the average in the European Union with regard to volume of deficit,” Fico said, as quoted by the SITA newswire.

If the 2.08 percent deficit of GDP cannot be met, Fico said, cuts would be made in spending.

“If a major crisis arises, we would generally freeze expenditures,” said Fico. “We have this option at any time.”

However, critics of the budget say it is built on sand and have poured most scorn on the government’s expectation that it will reap several billions of crowns in revenue from the departure of savers from the second pillar of the country’s pension system.

The Fico government reopened the second, or so-called capitalisation, pillar on November 15, allowing clients to transfer freely out of privately managed pension funds and return to the state-run pay-as-you-go system. The pillar will remain open until mid-2009. The government says that the second pillar of the pension system has been most affected by the current global financial crisis.

But pension fund managers and the opposition say there are no valid economic arguments behind the government’s move and have instead voiced suspicions that the real goal is to use the anticipated inflow of funds to plug gaps in the finances of the state-run social security provider Sociálna Poisťovňa, which is included in the public finances.

The Labour Ministry currently expects between 30,000 and 150,000 savers to quit the second pillar during the present re-opening.

The ministry however argues that that the budget numbers applying to second pillar transfers have not just been plucked out of the air.

According to Šmál, the Finance Ministry constructs the state budget based on data it receives from other institutions. This was the case for the number of people expected to leave the second pillar.

“We had to work with data we received from the social insurer and the Labour Ministry and they already have some experience with opening the pension pillar,” said Šmál. The second pillar was opened once before, during the first half of 2008. “The ministry’s estimate is thus built on decent predictions,” he said.

As for how the inflow will be spent, Šmál said it cannot be stated unambiguously how the money will be used.

“It will be state budget revenue as any other, without any specific assignment,” Šmál told The Slovak Spectator.

INEKO’s Goliáš said that the government should not spend money from the second pillar but should instead put it aside for the future.

“It [the government] will need the money in about 10-15 years, when Slovakia faces a crisis due to the ageing of the population,” Goliáš said.

However, observers also said that the government could have tightened its belt in other areas as well.

“There is space for wider application of competitive forms of public procurement, along with higher transparency,” Eugen Jurzyca, director of INEKO, told The Slovak Spectator. “Some state-run companies also appear to be a financial burden.”

Ivan Mikloš, a former finance minister and deputy chairman of the largest opposition party, the Slovak Democratic and Christian Union (SDKÚ), said that the budget does not create any basis for sustainable economic growth.

“The budget is a wasted opportunity in terms of protecting Slovakia from the impacts of the crisis and in terms of providing an impulse for the country’s economy or support for the middle class and families with children,” said Mikloš.

According to Mikloš, budget revenues have risen by Sk126 billion since 2006, a 49 percent increase.

However he cast doubt on whether the government has been spending the money in line with its declared intention of building a socially-oriented state.

Over the past three years the budget of the Interior Ministry has increased by 26 percent, the Ministry of Finance by 27 percent but the Ministry of Labour has grown by only 14 percent said Mikloš, adding that this seems to him a pretty weird route to a socially-oriented state.