POLITICAL observers say that Slovak-Hungarian relations have not improved despite recent meetings between the countries’ presidents and prime ministers and the passage of an amendment sponsored by the Hungarian Coalition Party (SMK). 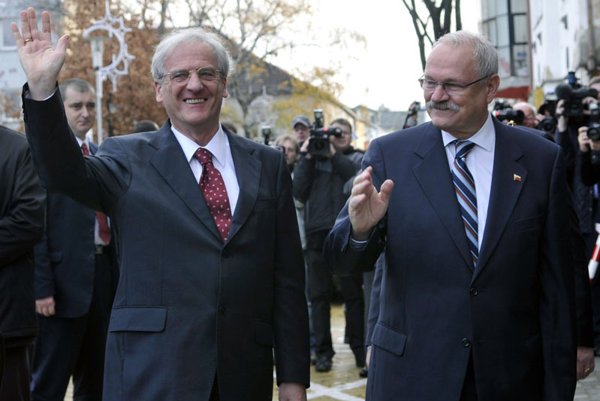 POLITICAL observers say that Slovak-Hungarian relations have not improved despite recent meetings between the countries’ presidents and prime ministers and the passage of an amendment sponsored by the Hungarian Coalition Party (SMK).

The amendment provided guidelines for deciding how geographical names should appear in textbooks for ethnic minorities.

The issue has been an irritant for the Hungarian minority in Slovakia recently.

Although the MPs of the coalition party Smer supported this amendment over the strong protests of coalition partners the Slovak National party (SNS) and the Movement for a Democratic Slovakia (HZDS), on the day it was passed, Prime Minister and Smer chairman Robert Fico simultaneously refused six proposals by Hungarian Prime Minister Ferenc Gyurcsány to improve relations between the two countries.

Gyurcsány sent his six proposals to improve Hungarian-Slovak relations in written form to Fico one day after the pair's November meeting in Komárno.

According to Fico, his suggestions are unacceptable to the Slovak government.

“We see no reason to accept any minority legislation,” Fico told journalists on November 3.

In his letter, quoted by Fico at the press conference, Gyurcsány first proposed more financial support from European Union funds for the minority school system and culture, as well as the option of using Hungarian textbooks in those Slovak schools which teach in the Hungarian language .

But Fico said that Hungarian textbooks will in no case be used in Slovakia unless they have been approved by the Slovak Education Ministry.

Gyurcsány also proposed that Slovakia found an institute of minority ombudsman and create a national code of behaviour applicable to politicians, with a “court of honour” to monitor its observance and compliance. With this tribunal, he hoped to stop politicians from using nationalist expressions that only inflame passions.

“It is crucial that our relations be characterised by mutual respect,” Gyurcsány wrote in his letter.

“Tribunal of honour – what is this meant to be? Are we in the 17th century?” Fico asked the journalists.

Gyurcsány also asked that the law limiting the use of flags and the national symbols of foreign countries at sport events be suspended. Again, Fico refused the proposal.

“What is a Hungarian national flag doing at a football match?” Fico asked.

Gyurcsány also proposed that Slovakia and Hungary jointly investigate incidents involving the rights of a member of an ethnic minority. The Slovak prime minister rejected this, too.

According to the political analyst László Öllős, Gyurcsány hoped the proposals would contribute to solving the hottest problems between Slovakia and Hungary.

But Öllős stressed that Gyurcsány’s effort to settle Slovak-Hungarian relations is perceived very differently by Hungarians and Slovaks.

Gyurcsány could get the support of a part of his electorate by causing visible improvement in the position of Hungarian minority in Slovakia.

In Slovakia, the situation is the reverse.

“The election year is coming close, and if the Slovak-Hungarian tension continues, this could be used in the election campaign,” Öllős told The Slovak Spectator.

According to Grigorij Mesežnikov, president of the Institute for Public Affairs think–tank, Fico’s refusal of Gyurcsány’s proposals was improper, even confrontational. Mesežnikov stressed for The Slovak Spectator that Fico should have negotiated the proposals with Gyurcsány in the first place.

“I consider relations between Slovakia and Hungary bad considering they are both members of the EU and NATO,” Mesežnikov said.

Hungarian President László Sólyom repeated the proposal to create the institute of minority ombudsman at a meeting with his Slovak counterpart Ivan Gašparovič in Nové Zámky on December 6.

But Gašparovič refused this proposal, saying that Slovakia already had an ombudsman whose responsibilities included minority issues. However, Sólyom defended his proposal.

“If there were a person allotted specially for minorities, this issue would gain weight,” Sólyom told a press conference after the meeting.

According to the SITA newswire, Sólyom repeatedly asked Gašparovič to initiate the passing of a minorities’ bill in parliament.

In spite of the fact that clauses about minorities are included in the Slovak Constitution and other laws, Sólyom expressed his conviction that it would be useful to summarise individual legislative points in one package.

“The Hungarian president knows very well that in Slovakia the rights of the Hungarian minority are above standard, and any attempt to increase them just causes unnecessary tension,” Kližanová-Rýsová told Slovak Radio.

She added: “Robert Fico would, however, welcome tougher laws in Hungary against extremism and nationalism, which were recently exported to Slovakia.”

The Smer party pushed through parliament an amendment to the Education Act which addresses how geographical names will be written in textbooks for ethnic minorities. Fico’s governmental allies – the SNS and HZDS parties – strongly opposed it.

According to the approved amendment, traditional geographical names used by specific minorities will appear in both Slovak and the minority language. The name in the minority language will come first, followed by the Slovak name in brackets or following an oblique, as in the approved textbooks for the years 2002 and 2006. At the end of the textbook, a dictionary of names in both languages is required.

Maps, however, would be published only in the country’s official language.

SNS MPs walked out of the vote in protest, claiming it was unconstitutional and contradicted the government’s platform.

“There was no reason to assist in the profanation of the state language,” Rafael Rafaj of the SNS caucus was quoted as saying by the SITA newswire.

And, according to SNS chairman Ján Slota, the passing of the amendment is “a disgusting act and a bad signal towards the Slovak nation”.

“Smer played a mean trick on its coalition partners,” Ján Kovarčík of the HZDS told SITA after the vote.

“For example, Stará Ľubovňa has for several centuries been Stará Ľubovňa, but now, according to this decision, it should be called Ólubló,” Mečiar said.

However Fico stressed for the journalists that he did not fear a worsening of the relations in the coalition.

Slota agreed that SNS MPs were not considering leaving the coalition. “We will surely not make our adversaries happy by doing this,” Slota added.

But the SNS has written to President Gašparovič asking him not to sign it. “Neither the education ministry, nor the SNS or HZDS MPs had the chance to comment on it,” Education Minister Ján Mikolaj told The Slovak Spectator.

He added: “The amendment speaks about traditional and used names, but from the legal point of view, these are non-definable expressions. So even we do not know exactly what these designations mean.”

However, Gašparovič seems to support the law. “I can unambiguously say that I am for the textbooks in two languages,” he told the STV public television station.

In the end, Mesežnikov believes the issue is absolutely unnecessary.

“The amendment only confirms the status quo," he said. "Now I expect there to be interpretational wars to define which are traditional names and which are not."