Slovakia’s highest hotel room a new tourist drawWANT to get away from it all? A Slovak cable car company may have just the place: a room for rent on top of Lomnický Peak, the second highest peak in Slovakia. 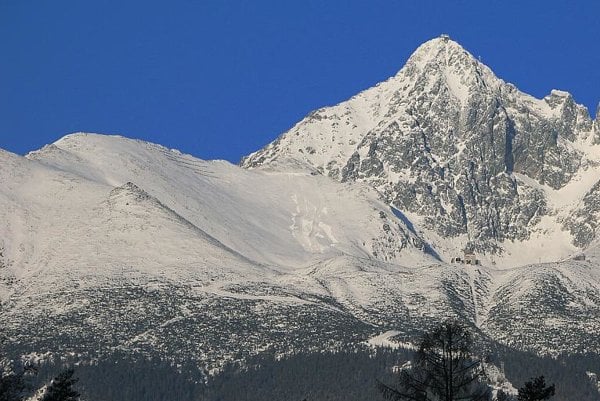 Mind the gap: A room for rent on top of Lomnický Peak comes with a spectacular view, as does the new observation deck. (Source: SITA)
Font size:A-|A+

Guests can spend the night 2,634 metres above sea level, in a “mini-hotel” that can only be reached by cable car.

In its opening summer season, from June to November 18 last year, the room was occupied for 72 nights, the SITA newswire wrote.

“We had to put off or cancel some reservations because of bad weather,” Danka Velecká, the marketing director of the Tatranské Lanové Dráhy (TLD) cable car operator, told SITA.

The room is located in the cable car building at the top of the peak, which also houses a restaurant and offices for astronomers and meteorologists who work with the Slovak Academy of Sciences.

The only way to get there is with TLD’s suspension cable car.

The first guests who spent the night at Lomnický Peak were a couple from the Czech Republic. The fact that they returned three times with friends is a pretty good sign that they liked the place.
So far, 80 percent of the tourists who have stayed at Lomnický Peak have been Czech.

Since December 22, when the cable car started running again after a regular maintenance check, the room has been occupied every third day. It also had guests on New Year’s Eve.

One night at Lomnický Peak costs Sk12,900 (€390) for up to four people. For that price, tourists get a room with two double beds and a telescope for watching the night sky. It also includes a welcome drink, a three-course dinner, a bottle of wine, breakfast and the cable car trips.
Another perk is the view – with good visibility, the peak has a view that stretches about 300 kilometres.

If there is bad weather, tourists get an extra night’s lodging for free. When the weather is too poor for the cable car to run, guests have to stay at Lomnický Peak for another day. In that case, the accommodation and meal is free of charge.

Tatra observation deck only for the brave

A NEW observation deck was opened at the top of Lomnický Štít, the second highest peak in the High Tatras, on June 27, the SITA newswire reported.

The deck provides stunning views of the mountains and the Malá Studená Valley, and even extends over the cliffs for a look at the sheer drop below.

The deck is approximately four metres long and a metre wide. According to its designer, Miroslav Mačičák, it is fastened to the cliffs with a special glue that enables it to withstand wind speeds of up to 252 kilometres per hour and bear the weight of several tourists at a time.

“The deck is designed for a much higher number of people than there is space to fit,” Mačičák said.
The observation deck took about three months to build, with components being transported to the peak by helicopter. It cost about Sk600,000.

On the same day as it was opened, the State Forest Company of the Tatras National Park (TANAP) also opened the highest natural botanical garden in Slovakia, at 2,634 metres above sea level. “These are naturally-grown flowers, not grown in a greenhouse,“ Zuzana Kyselová, a botanist and researcher for TANAP, said at the garden's opening. “We wanted to show that flowers grow in the highest ranges of the Tatras, and how pretty they truly are.”

Luckily for visitors, many of the flowers at Lomnický Štít are currently in bloom. The plants are assigned charts that show their name along with a picture.

Police intervened after only in the evening hours.