Foreign literature makes it to the Slovak market

NOT long ago, it was nearly impossible to find a book written in a language other than Slovak or Czech in Slovak bookstores. Most Slovaks can still clearly remember having to travel to Budapest, Prague, or Vienna to purchase original works of world literature, both fiction and non-fiction, written in German or English. Fortunately, the Slovak foreign literature market has since developed so that today it’s possible to get any book one could wish for. 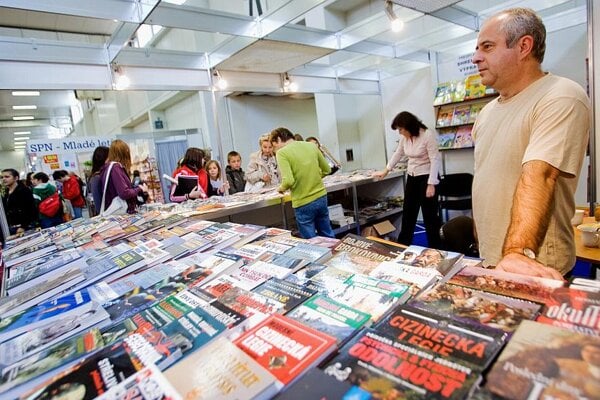 NOT long ago, it was nearly impossible to find a book written in a language other than Slovak or Czech in Slovak bookstores. Most Slovaks can still clearly remember having to travel to Budapest, Prague, or Vienna to purchase original works of world literature, both fiction and non-fiction, written in German or English. Fortunately, the Slovak foreign literature market has since developed so that today it’s possible to get any book one could wish for.

Today, a growing number of companies import and distribute original foreign literature. In fact, there are several good importers of foreign books that have been working on the Slovak market for years now, said Martin Šimek, the director of Megabooks SK, one of the distribution companies.
Although the Slovak market might appear chaotic due to the high number of small distributors, the growing demand for foreign books is generally satisfied. The owners of small bookshops compensate for the lack of foreign literature in stock with their willingness to deliver special orders.
Bigger bookstores such as ArtForum or Panta Rhei usually keep large selections of foreign titles on their shelves.

According to Šimek, the demand for foreign-language literature is rising along with the increasing fluency in foreign languages.

“The young generation of readers in particular seeks out original books and uses materials in foreign language for studying and so on,” Šimek said, adding that the demand for new kinds of literature increases all the time.

According to Karol Fajth from the Eurobooks bookstore in Bratislava, the Slovak market still conforms to the rule that the number of books sold rises while the number of readers remains unchanged. This paradox is explained by the profile of the reading public: well-educated people always read a lot and their demand for books grows. Thanks to the improving economic situation they can simply afford more books, he said. The customers in the small Eurobooks bookstore are mainly Slovaks.

“Perhaps we are not yet much affected by the consumer culture, and books are still irreplaceable to Slovaks,” Fajth commented.

Šimek says that the market for foreign literature is mixed, depending on the type of literature the customer buys. While language textbooks are obviously most in demand by Slovak customers, fiction and non-fiction is interesting for both Slovaks and foreigners working or studying in Slovakia.
The book market, just like any other market, is influenced mainly by demand, Šimek said.

“If we find out about a segment of the book market where there is a demand not properly met by our offer, we try to react immediately and offer new titles to satisfy their needs,” he explained.
According to Fajth, most of the publishing houses make efforts to keep the distributors informed about recent and upcoming releases. He explained that at Eurobooks they don’t just accept offers from publishing houses, they also care about the feedback they get from readers when it’s time to decide which new books to order. The everyday contact with readers is, according to him, one of the advantages of small bookshops in comparison to megastores.

“Almost every new book is promoted by the slogan ‘bestseller’, but we learn the truth from the readers,” Fajth said.

Fajth said that German literature traditionally holds second place among the books sold, and he expects the number to rise next year, since the currency in Slovakia will be the euro and readers will be able to see that prices in Slovakia are comparable to prices abroad.

French, Spanish and Italian are the only other languages significantly represented in Slovak bookshops. According to the distributors, literature in languages such as Polish, Hungarian, Slovenian, Russian, and other European and non-European languages is not sufficiently in demand to be held in stock, but they are always able to specially order books in various languages on demand.
“Slovak booksellers can get books published anywhere in the world at competitive prices,” Fajth said.

According to Fajth, it’s true that there are many more foreign books available on the Slovak market than there were some years ago, but in this respect there is a huge difference between Bratislava and other parts of Slovakia. On top of that, availability is one thing, but price is also an issue, he said.

However, Šimek said that the lack of foreign-language books in the past was caused by low demand among Slovak customers and the consequent unwillingness of booksellers to order books that were not sure to be sold.

“I believe that in the coming years the offer of foreign books by Slovak booksellers will grow even more, considering the needs of the customers,” Šimek said.

And, with the rising demand for and supply of foreign books, the quality of services is also improving.

“In our bookstore, the reader can buy the latest Stephen King novel on the same day it appears on the counters of American or British bookstores,” Fajth said.