Many Slovaks enjoy poking fun at how commercial Christmas is in the United States, joking that Santa Claus drives a truck in America instead of a team of reindeer, or that Christmas advertising and carol muzak start in the middle of July. And yet, almost two decades since the demise of Communism, even the good old heart of Central Europe has not proven immune to the American influence. 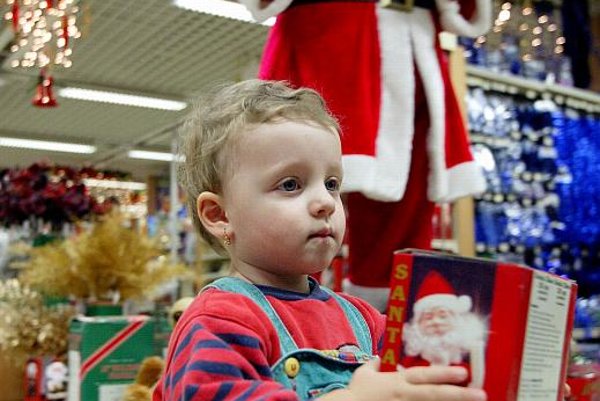 Many Slovaks enjoy poking fun at how commercial Christmas is in the United States, joking that Santa Claus drives a truck in America instead of a team of reindeer, or that Christmas advertising and carol muzak start in the middle of July. And yet, almost two decades since the demise of Communism, even the good old heart of Central Europe has not proven immune to the American influence.

“People often think of holidays and customs as unchanging, but in reality they evolve,” said Juraj Zajonc from the Institute of Ethnology at the Slovak Academy of Sciences. “We don’t usually realize this until much later, when the present and the past are juxtaposed for some reason. Before the (1989) Velvet Revolution, the religious aspect of the holiday was more or less ignored, and Christmas was officially presented as a holiday of peace. Now there are many more possible interpretations.”

As the most rural and most ethnically diverse region in the country, Eastern Slovakia could be expected to hold on to its traditions longer than elsewhere. But even here, consumerism is making inroads.

Christmas traditions used to vary widely in the east. “The majority Slovak population includes Gorals in the north, Rusyns and Sotaks in the north-east, and Hungarian Slovaks in the south,” said Katarína Nováková of the Ethnology and Non-European Studies Department of Trnava University. “All of these people celebrated Christmas in a distinct way.”

Nevertheless, some traditions were shared by all minorities.

“One of the particularities of Eastern Slovakia was rohače (horns) in the shape of different types of cattle, which were baked only to be stocked in the pantry,” Nováková said. “There always had to be as many cakes baked as there were heads of cattle, to ensure that the number of cattle would be preserved for the upcoming year. By the way, this custom was widespread across Europe until the late 18th century.”

A number of cooking rituals were connected as well.

“Women had to water fruit trees with the water they used for cooking bobaľky (little balls of dough sprinkled with poppy seeds) or pasta,” Nováková said. “In the Šariš and Zemplín regions, special cakes called vtáčiky (little birds) were always prepared for the carollers who went from house to house to wish villagers a Merry Christmas.”

Bread known as kračun was baked containing the seeds of every type of plant grown on the homestead. The seeds were then removed from the loaf and were reused during the following planting season. This custom was so widespread that it gave its name to Christmas Eve, which is still called Kračun in a majority of eastern Slovak dialects.

Dinner was meat-free, and traditionally seven or nine courses were served, for those numbers were believed to have magical properties.

Many of these rites came from pagan times, Nováková said.

“Although Christianity put an end to the bountiful pagan feasts, people never stopped putting meat on the Christmas table, even if it couldn’t be eaten until after midnight,” she said. “They also kept up rituals such as making sacrifices to fire, water or wind, transforming them slightly to conform to the new religion. Crumbs, for instance, were often thrown into the fireplace or down the well to ‘involve’ them in the celebrations.”

Gone with the wind

However, few of these customs survived beyond the second half of the 20th century, as people gradually gave up cooking so many different meals and opted for simpler dishes such as fish, potato salad, ready-made sweets or exotic fruits that could be bought from the grocery store.

Meanwhile, traditions such as putting mashed garlic on door lintels, baking special wafers with herbs for animals, or hanging straw decorations from the ceiling instead of erecting Christmas trees disappeared altogether.

“What 50 or 70 years ago was a holiday of peace and love has been completely lost,” Nováková said. “The stress of not having bought everything we wanted to get, along with worries about the amount of pineapple and salmon that have to be prepared for our guests, seem to have replaced the tranquillity that was always the most important part of Christmas.”

Nováková said that the media-created ‘real’ Christmas atmosphere in Slovakia was only a pale imitation of the past. “We buy a bottle or two of wine from the store, bake a cake from grandma’s recipe, listen to a CD with some carols, watch Home Alone for the 150th time, and eat tangerines. I’m not being cynical, it’s just that the traditional Slovak Christmas has simply vanished.”

Alojz Tkáč, the archbishop of Košice, agreed that the holiday has lost a great deal of its former charm, but maintained that Christmas remained a significant occasion for Slovaks.

“The Catholic Church has never stopped seeing Christmas as an important occasion,” he told Spex. “We have always celebrated the birth of Jesus Christ, and this strong belief of ours is expressed in the many beautiful songs we sing when we meet in our churches at Christmas time. Views of this holiday, however, vary from person to person. Most Slovaks still understand its essence, but an increasing number of people have stopped focusing on the spiritual side of Christmas.”

The archbishop added that the holiday was important for other than religious reasons.

“Christmas is extremely important in general, and not just for Christians,” he observed.

“Even many non-believers consider it a time at which we should focus on family and solidarity, and they are equally as disposed to be generous and kind towards others as are religious people in this holy period.”

On the other hand, the archbishop had stern words for those who ignored the real meaning of Christmas.

“Some people see Christmas as an opportunity to have a few days off and eat a lot of food,” Tkáč stated. “They are hugely supported in this by the media and by the retail industry, which offer only a brand of Christmas consumerism.”

On the other hand, Silvia Liptáková, director of the Cassovia shopping center in Košice, said she believed that shopping malls could have a positive effect on people.

“Gifts, decorations and shopping have long been an inseparable part of Christmas, and in these centers, people can find everything they need under one roof,” she said. “Moreover, store owners always try to create a better atmosphere by staging various performances, lotteries or competitions for all ages. Children can talk to Santa Claus or Snow White while their parents go shopping.”

“Of course, shopping should not become the only purpose of the holiday, and you would be surprised to see how many people visit shopping malls even on Christmas Eve,” she said. “We shouldn’t forget that the best ingredients of a beautiful Christmas are spending time with one’s family and trying to be more good-hearted than during the rest of the year.”