An ivory tower that should be torn down

CALLED BY musicologist Vladimír Godár “Slovakia’s only musical immigrant”, Evgeny Irshai, who in 1978 graduated from the famous N.A. Rimsky-Korsakov Saint Petersburg State Conservatory and thirteen years later moved to Slovakia, is among the most interesting personalities of the local classical music scene. 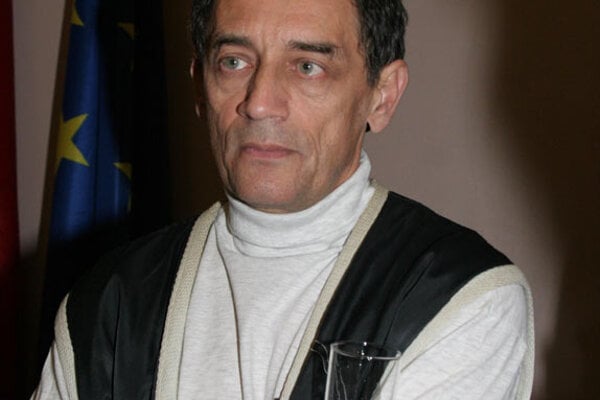 CALLED BY musicologist Vladimír Godár “Slovakia’s only musical immigrant”, Evgeny Irshai, who in 1978 graduated from the famous N.A. Rimsky-Korsakov Saint Petersburg State Conservatory and thirteen years later moved to Slovakia, is among the most interesting personalities of the local classical music scene.

The renowned composer, pianist and university teacher is the author of numerous vocal and instrumental pieces. For a recent composition, titled Sonata del grato, he was honoured with the Desider Zador Award in Ukraine.

The Slovak Spectator asked Irshai about the prize as well as his views on the Slovak classical music scene.

The Slovak Spectator (TSS): You are of Russian origin, have lived in Slovakia for two decades and have now been awarded in Ukraine. It seems a little complicated...
Evgeny Irshai (EI): Yes, it probably does. The story of Sonata del grato is, in fact, very interesting. I wrote it last June for [a Slovak clarinettist] Branislav Dugovič, who wanted to include it on his new CD. By coincidence, a friend from Kiev called me only a few days afterwards and asked me whether I had any compositions for clarinet, as he was looking for one that could be performed by a well-known Ukrainian musician. I sent him the Sonata and soon practically forgot about it. Later, I was told the composition had premiered at the Kiev Music Festival, was successfully performed in Lviv and even somewhere abroad. Some months passed, and then this unexpected message came: I have won an award. Of course, it is a great honour, but what delighted me the most was the fact that I had dedicated the composition to [famous Slovak composer] Ilja Zeljenka, to whom I owe a lot for my career. The prize has somehow justified the dedication, as if I were now worthy of the great man who supported me so much.

TSS: Do the Russian and the Slovak musical traditions differ substantially?
EI: The Russian heritage is, understandably, older and more voluminous, and there are, as a result, some particularities on both sides, but I would not say they are sharply different. Slovak musicians are perhaps closer to the rationalist German tradition. In Russia, it is rather the more emotional Romanticism that prevails. This, by the way, concerns not only professionals, but also their audiences. However, thanks to something like 'Slavic spirit', the two countries will always have more in common than in contrast.

TSS: Classical music composers, like all artists, can sometimes appear to be living in ivory towers. Are they?
EI: Unfortunately, composers do not only seem but often really are cloistered and, what is more, they sometimes refuse to communicate even with one another. This is, in my opinion, the biggest problem in the Slovak classical music scene. Composers rarely want to share their experiences and are unwilling to accept others’ views on music as such, as well as on its position in today’s society. I wish we could tear down these ivory towers, met more often and were able to agree on some common goals.

TSS: What “common goals” can classical music composers have?
EI: First of all, we should boost Slovakia’s concert life, for it is a little behind modern times, even if it probably sounds like a cliché. And there are many more challenges ahead. My personal impression is that composers, and artists in general, are slowly losing respect in the eyes of society. This applies to all countries, not only this one. Improving the quality of concerts, making them more varied and mainly more available to the wider public might help to change that.

TSS: As a professor at the Academy of Performing Arts in Bratislava (VŠMU), you participate in the training of future musicians. What personal qualities do you think a composer should have?
EI: I will not say anything new by asserting that the most important quality for a musician is industriousness. But this, alone, will not ensure immediate success. One has to be humble enough to learn, but also creative enough to fashion one’s own interpretation – even of traditional techniques.