THE LANGUAGE they speak at home, at work, in public offices or in the pub is, as a tool of communication, just a part of everyday life that few people spend much time contemplating. This changes when that language becomes a tool in the hands of politicians. Now, a struggle over a new language law which came into force this summer in Slovakia has crossed the Danube and moved beyond state borders. 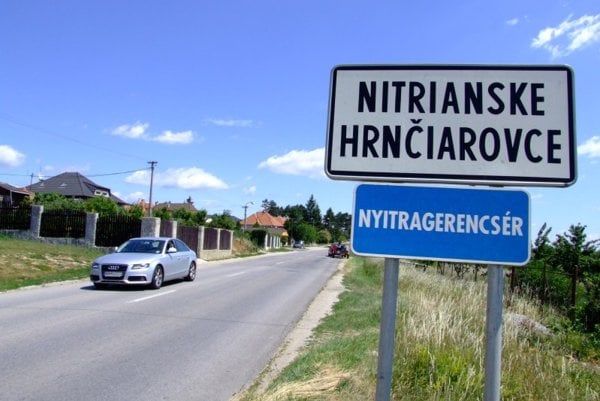 THE LANGUAGE they speak at home, at work, in public offices or in the pub is, as a tool of communication, just a part of everyday life that few people spend much time contemplating. This changes when that language becomes a tool in the hands of politicians. Now, a struggle over a new language law which came into force this summer in Slovakia has crossed the Danube and moved beyond state borders.

The Slovak parliament passed the long-discussed Language Act – proposed by Culture Minister Marek Maďarič – on June 30. The amended law introduces fines of up to €5,000 for the use of incorrect Slovak from September 2009, and will also enable stricter official supervision of the use of ‘correct’ Slovak.

According to the law, doctors, nurses and caretakers in health-care and social facilities in municipalities in which significant ethnic minorities live may speak with patients and clients in the language of those minorities. If texts on memorials and plaques are written in both the state language and a foreign language, the foreign inscription may not be bigger than the inscription in the state language.

No impact on the media

Regional and local radio stations will not have to broadcast first in Slovak, and only then in the minority language, as Maďarič originally proposed.

The Organisation for Security and Co-operation in Europe (OSCE) Representative on Freedom of the Media Miklós Haraszti had earlier signalled to the Slovak authorities his concern over the requirement to broadcast local and regional minority language programmes in Slovak as well, as this would be technically and financially prohibitive and therefore would restrict broadcasting pluralism, he stated in his regular report to the OSCE’s Permanent Council. His office will continue monitoring the ministry’s supervising practice for compatibility with media freedom requirements.

However, problems have already occurred with the use of Hungarian in the printed press, despite the fact that Maďarič had claimed the act would in no way affect the work of the media. On July 1, officials from the Culture Ministry sent a letter to the Új Szó daily, which publishes in Hungarian (and is owned by the same publishing house as The Slovak Spectator), stating that the daily was obliged by the new law to write all geographical names in Slovak and only additionally in Hungarian. Many Slovak place names have completely different Hungarian equivalents. The ministry admitted a day later that it had made a mistake and explained it as a misinterpretation of the law by bureaucrats.

“The act includes a lot of sentences formulated very ambiguously and I think that was done for a purpose, to give as much power as possible to bureaucrats, so that they alone can decide when to apply the law and when not to,” political analyst Laszlo Öllős said, referring to the Language Act.

“There are parts which indicate that if a Hungarian, Ruthenian, or whoever goes to the hospital and sees a doctor who happens to speak their respective minority language and they start talking in it, that can be classified as a violation of this law,” Öllős told The Slovak Spectator.

The opposition Hungarian Coalition Party (SMK) has rejected the law, describing it as one that puts citizens who belong to a minority at a disadvantage and violates the principle of equality. According to Agnes Biró, a deputy for the SMK, there are many worrying issues about the act, among them the possibility that the fines it introduces will discourage people from using minority languages and restrict the legitimate activities of national minorities.

“The law only deals with the position of the state language which ‘has a priority before other languages’ apart from the Czech and foreign languages which are put into the position of second, so-called supporting, official languages,” Biró told The Slovak Spectator.

According to her, in the law, multilingualism is only required from minorities.

“Requiring the knowledge of a minority language for instance from the staff of social facilities would [according to the proposal’s reasoning] be discriminatory for the employees, [even] if it was an orphanage with 90 percent of clients belonging to a minority,” Biró said.

Several state officials from neighbouring Hungary have made statements condemning the Slovak Language Act, saying that its passing will have a negative impact on future bilateral meetings. Approximately 10 percent of Slovakia’s citizens speak Hungarian as their first language.

According to Öllős, Hungary regards the situation as a decision by the Slovak government to do away with the Hungarian minority.

“Slovaks know very well from their own history what it means when a language is excluded from official communication,” Öllős said. “And Hungary doesn’t want to stay silent.”

The Hungarian Foreign Affairs Ministry in fact criticised the law on the very day it was passed, saying that the Slovak parliament’s step was “worrying from the point of view of international law and represents a murky political message”, the SITA newswire reported.

Hungarian Prime Minister Gordon Bajnai said that the act contradicts the spirit of the bilateral agreement between Slovakia and Hungary as well as other international agreements.

Slovak politicians from the ruling coalition, on the contrary, claim that the act strengthens the position of national minorities in Slovakia.

A meeting between the prime ministers of both countries which had originally been planned to take place in the first half of July was postponed to an unspecified date, as the Hungarian side claimed it would make no sense at this time.

Slovak Foreign Affairs Minister Miroslav Lajčák said the Slovak side will not insist on the meeting if Hungary is not ready for it.

Lajčák believes that the dispute about the language law will not influence the cooperation of Slovakia, Hungary, the Czech Republic and Poland within the Visegrad Group, of which Hungary recently took over the year-long presidency. He does not expect a repeat of the situation in 2006 when, at the end of the previous Hungarian presidency, Hungary’s prime minister of the time, Ferenc Gyurcsány, announced at a post-summit press conference that his meeting with Slovakia’s prime minister, Robert Fico, which was supposed to follow the summit had been cancelled. The reason for his move was the participation of the Slovak National Party (SNS) in Fico’s government, SITA reported.

On July 5 2009, at a celebration of the day of Ss. Cyril and Methodius at Devín castle, Fico said that protection of the Slovak language should be first on the agenda of any Slovak government.

“This is the only way to protect ourselves from the dangerous irredentism which breathes stronger and stronger from the other side of the Danube,” he said in his speech, as quoted by the TASR newswire.

“I’m sorry when the mutual relations of Hungary and Slovakia are mixed with domestic political issues and with a certain kind of nationalism,” TASR quoted Bajnai as saying.

According to Öllős one reason why the government has come up with the law now is that they need to find a new agenda to divert attention from recent scandals, since there has been more and more money involved in each scandal, with the emissions quotas sale scandal being the clearest example.

“Nationalism has been used for these purposes for time immemorial,” Öllős said. He said the passing of the act was a premeditated nationalistic step by the current government.

According to the speaker of the Slovak parliament, Pavol Paška, the law was passed in line with the programme of the government and the Culture Ministry in order to strengthen the state language.

“Passing this law before the meeting of the prime ministers of the two countries is a sign of arrogance by the ruling coalition, in contradiction to the proclaimed attempts at mutual cooperation,” said the SMK MP Biró.

Prior to the passage of the Language Act Katalin Szilli sent a letter to Paška asking him to postpone the vote on it until some bilateral meetings initiated by the OSCE High Commissioner on National Minorities Knut Vollebaek could take place. She has also notified Vollebaek about it.

Paška replied with a letter stating that the law is by no means connected with any sophisticated attack on the Hungarian or any other minority living in Slovakia.

“I have a feeling that it’s again an agenda of maintaining tension in Slovak-Hungarian relations [regarded as] desirable by the Hungarian side, and I refuse that,” Paška said, as quoted by SITA.

Biró said that the statements of Paška addressed to Szilli, specifically that the act will not affect the use of minority languages, were false.

“Also the Slovak officials know very well that we are dealing with human rights here, which are not a domestic state issue, especially not when the state is an EU country,” Biró told The Slovak Spectator.

Öllős noted that Slovakia signed several international documents before its 2004 EU accession in order to demonstrate to western European countries that it had changed its ways since the controversial mid-1990s period under Vladimír Mečiar. But the current government is composed of essentially the same parties as the Mečiar government and Öllős said that the situation has reversed and Slovakia is now moving in the wrong direction.

Slovakia has accepted the European Charter of Regional or Minority Languages but it hasn’t been incorporated into the national legal system; and the Language Act definitely contradicts the charter, Öllős added.

According to Szilli, Europe has the tools to warn Slovakia and to take measures towards changing the law. Slovakia would never have been able to join the EU if such a law had been passed before accession, she said, as reported by SITA.

“I believe that this kind of law would be a big problem [for Slovakia’s entering the EU],” Öllős said. “A vast majority of European countries not only don’t do these things to their minorities but, on the contrary, widen minority rights and stress that minorities belong to the state.”