NO ONE ever said it was going to be easy, but after putting their exasperated supporters through 180 minutes of agony in the past week, Slovakia's footballers left it until late on a snowy Wednesday night in Poland to finally book their place at next summer’s World Cup finals in South Africa. 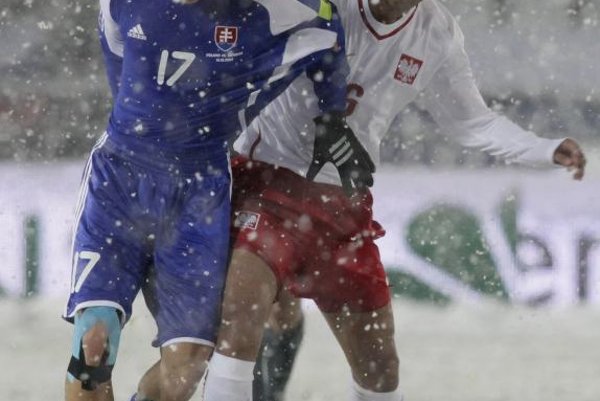 NO ONE ever said it was going to be easy, but after putting their exasperated supporters through 180 minutes of agony in the past week, Slovakia's footballers left it until late on a snowy Wednesday night in Poland to finally book their place at next summer’s World Cup finals in South Africa.

Fighting blizzard conditions and the fevered expectations of a nation – not to mention 11 spirited Polish opponents – Slovakia eventually emerged 1-0 winners in Chorzow in the final match of a long qualifying campaign.

It was enough to clinch top spot in World Cup Qualifying Group Three and earn their place on football’s grandest stage.

“I love these players,” said Slovakia’s Coach Vladimír Weiss after Wednesday’s victory, earned after a third minute own-goal by the Poland defender Seweryn Gancarczyk. “In these qualifiers we have played well and had a little bit of luck. Everybody made a contribution and we made the whole of Slovakia happy. This is a fantastic feeling.”

It was no more than Weiss deserved after masterminding qualification from within a group that also included the Czech Republic, Slovenia, Poland and Northern Ireland, all of whom have previously featured at the World Cup finals.

Slovakia has not been there before – at least not as an independent nation – but their record of seven wins from 10 matches in this campaign, including a victory in Prague against the group favourite, was proof that a corner has been turned in Slovak football.

“Several people maybe didn’t believe in us,” said Weiss. “But we succeeded. I am proud of these guys and this triumph.”

Slovakia went to Poland knowing that only victory would guarantee the place in South Africa that, one week ago, had seemed close to a formality. Needing only a draw to Slovenia at home in Bratislava on October 10, Slovakia instead lost 2-0 and gave the Slovenian visitors the chance to pip them at the post.

There had been an atmosphere of anxious expectation at the crumbling Tehelné Pole Stadium, hosting its last match before its redevelopment. The 25,000 tickets for the match had sold out in only four minutes, prompting authorities to erect a big screen in the city centre for the overspill. And although most fans were decked out in merchandise presumptuously celebrating a South African expedition for Slovakia and preparing for a party across the country, they went home disappointed and fearing the worst. Slovenia scored twice in the second half to keep its own dreams of qualification alive.

On Wednesday, with the Slovenia team all but certain to beat San Marino in their final qualifying match, Slovak fans were forced to crowd around television screens showing the action from Poland. The team was without four first-team regulars, including the Slovak Player of the Year, the Liverpool defender Martin Škrtel, who picked up his second yellow card of the campaign against Slovenia and was suspended for the match. The ball also seemed to be missing for the television audience – it was frequently lost in the snow – but the celebrations from the Slovakia players were clear enough when Marek Hamšík’s left-wing cross was directed past Poland's goalkeeper Jerzy Dudek by the hapless Gancarczyk.

That barely settled the anxieties, however, and Poland laid siege to Slovakia’s goal for the following 87 minutes. Goalkeeper Ján Mucha made three excellent saves and the Slovaks were also indebted to defender Zdeno Štrba for two crucial interceptions.

Somehow Slovakia held on, and attention now turns to Cape Town on December 4, when FIFA, world football’s governing body, makes the draw for the 2010 finals to be played next June and July. Slovakia will feature alongside Brazil, Germany, Italy, England and Argentina, among other forces of the international game, in what will be the most watched event in Slovak sporting history.

The stars of Weiss’s young team can now return to their domestic clubs dotted across Europe and work on gaining valuable experience for far greater tests ahead. Much will be expected of the likes of Hamšík, who plays for Napoli in Italy’s Serie A, as well as Škrtel and Vladimír Weiss Jr, playing in the English Premier League.

“This team has a lot of quality and a bright future,” said Weiss. “Football is phenomenon and I, like they, enjoyed it today.”