THREE prisoners from the controversial US detention centre at Guantánamo Bay will be resettled in Slovakia this year following an agreement reached between the Slovak and US governments. 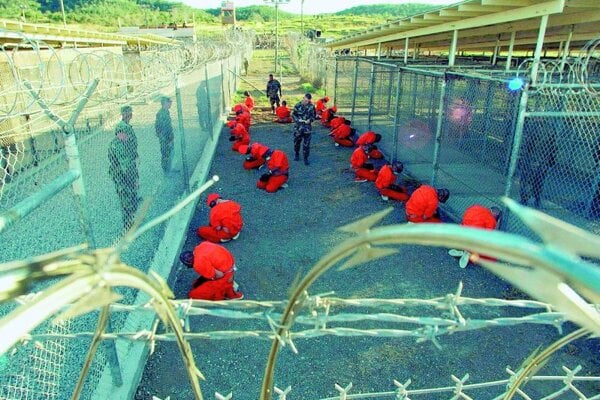 Three Guantánamo inmates will be moved to a camp in Slovakia. (Source: Reuters)
Font size:A-|A+0

THREE prisoners from the controversial US detention centre at Guantánamo Bay will be resettled in Slovakia this year following an agreement reached between the Slovak and US governments.

Slovak officials have provided little information about the detainees, or about how the security risks and legal complexities involved in housing them would be handled. At a press conference in Bratislava on January 19, Foreign Minister Miroslav Lajčák said only that none of the three were suspected terrorists, nor had any ever been charged with a crime.

Slovakia becomes the tenth European Union country to accept Guantánamo detainees, following an international appeal by US President Barack Obama for help in closing the prison. The Fico government’s decision to take the three, as well as its vocal support for Obama himself, surprised some diplomats, who contrasted it with Prime Minister Robert Fico’s formerly cool stance towards the US president.

“While I applaud this decision, it’s difficult to know what is behind it,” said former Slovak ambassador to Washington Martin Bútora. “Anti-American rhetoric has always been a strong part of Fico’s politics, and nothing changed with the election of Obama, even though on the policy level you might have expected there to be some shared ground between the two.”

A senior Slovak Foreign Ministry official described the three detainees as “non-combatant militants”, such as cooks or drivers within suspected terrorist organisations.

According to a source close to the transfer, the Slovak side was given a list of 10 candidates to choose from.

Foreign and Interior Ministry officials interviewed prisoners at Guantánamo, weighing their ability to adapt to the “specifics” of the Slovak environment, such as the absence of a larger Muslim community. The prisoners were free to reject resettlement in Slovakia, and in at least one instance did so.

On their arrival, the Foreign Ministry official said, the three will be housed in special camps under the control of the Interior Ministry.

Following an 18-month process of acclimatisation to Slovakia, during which they will get help learning the language, finding a job and a place to live, the prisoners will be released, though they will remain under the supervision of local intelligence services for an undetermined period.

US not an option

In an interview with The Slovak Spectator, the special envoy for the closing of Guantánamo, Daniel Fried, said that the detainees would not immediately be free to travel within the passport-free Schengen zone that Slovakia belongs to.

“In most cases, detainees do not get a Schengen visa but a national visa issued by the country they settle in," he said. "That means that in the short term they can’t travel, and in the longer term it’s a question of what country would accept them.”

An agreement between the US and the EU, as well as an EU regulation from June 2009 lay out the rules for transfers of Guantánamo detainees within Schengen. “Slovakia is not acting alone, but together with other European countries who have accepted detainees under the umbrella of these accords, which basically gave them the green light,” Fried said.

The detainees were not given the option of resettlement within the United States, however, because Congress has banned it. “It’s a fair question,” Fried said. “Many people think that we should be taking lower risk detainees as well, but Congress has not been willing to do so. But we are also doing our bit, as we are taking the highest risk detainees, who will go before a court or be in long-term detention.”

Other EU members to have taken prisoners include Great Britain, which has resettled 14, as well as Portugal, France, Italy, Spain and Hungary.

At a briefing, a senior Foreign Ministry official called the decision to accept detainees “a statement of political support for what the Obama administration is trying to achieve. There are too many people trying to tear Obama down for what he has not done so far.” He also said that “we wanted to help resolve an issue that has caused tension within the Euro-Atlantic community.”

Lajčák also spoke of solidarity with the US and in particular with Obama, “who has introduced a new atmosphere to international relations and who is promoting new approaches to solving problems inherited from the past”.

The tone of these statements differs sharply from Prime Minister Robert Fico’s laconic response to Obama’s election victory in 2008, in which he observed that “it will not make bread any cheaper in Slovakia”.

A Slovak diplomat who formerly served in Washington said he suspected the Fico government was hoping to win something in return for accepting the detainees, such as an audience for Fico with Obama, or a visit to Slovakia by Secretary of State Hillary Clinton. “This is a win-win situation for Fico here, first of all because it was the right thing to do, and secondly because if he gets something for it, such as a toning down of US criticism of corruption in Slovakia, it could help him with elections only five months away,” the source said. “I also suspect that he wants to show up US foreign policy as cynical, and to demonstrate that he can snuggle up to Moscow and visit Libya, he can basically do whatever he wants, but in the end he can always buy a good name.”

But Fried, who was involved in the transfer talks, said there had been no horse-trading for high-level meetings. “They never put it on the table,” he said. “They said they were interested in good relations with the US, but there was no bazaar mentality.”

Bútora also said he thought it was unlikely that Fico could barter an audience with Obama this close to Slovakia’s June parliamentary elections. “That would basically amount to an election endorsement,” he said. “I don’t want to believe this was just about business.”

The future of Guantánamo

The Guantánamo Bay site was chosen as a detention centre for suspected terrorists by former US President George W. Bush following the September 11, 2001, attacks on New York and Washington. Most of the jail’s current population of some 220 prisoners are suspected of ties to Al-Qaeda or the Taliban movement in Afghanistan, while others were taken prisoner during fighting in Iraq and Afghanistan. Obama promised, on taking office, to shut the facility by January 2010, but that target has proven too ambitious and the legal and security issues more complex than Obama anticipated.

The US chargé d’affaires in Bratislava, Keith Eddins, said that the USA had decided to locate up to 150 low-risk prisoners in allied countries because it had no assurance they would not be mistreated if returned to their home countries. Some 100 prisoners – those considered too dangerous to release – will remain in prisons in the US or will be tried in court.

Eddins acknowledged that the decision to release the prisoners amounted to an admission from the White House that they should never have been in custody in the first place. “Some of the people who wound up in Guantánamo do not represent the threat that we first believed.”